Andrea Bargnani: "I love Toronto and playing for the team"

Andrea Bargnani: "I love Toronto and playing for the team" 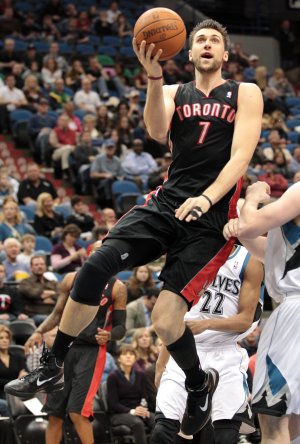 Andrea, what's the best part of your game that no one ever mentions? – @therealpeja

Andrea Bargnani: I think the dribbling skills. I grew up playing at the guard position so I dribble the ball pretty good to be a 7-footer.

If you could tell 20-year-old Bargnani one thing, what would it be? – @therealpeja

AB: Learn how to shoot cause at the end of the day you need to score.

Andrea, love the Primo Pasta commercials. But do you actually eat it? – @Cote004

Have you tried recruiting another All-Star to play along with you? – @thereal5COBAR

AB: I'm not an All-Star yet. Working on it! I want our city to make the playoffs again.

What was socially or culturally the most difficult part of playing overseas to playing in the NBA? – @RottenSports

AB: Simply the fact that the NBA is the hardest league in the world.

Has DeMar DeRozan ever dunked on you in practice? – @ImNotDaFather

AB: We play in the same team even in practice, so I don't have to worry.

If you were not in the NBA right now, in which league would you be in? – @peeweeruiz

Have you talked to Jonas Valanciunas? How do you think your games compliment each other? – the_REAL_alexb

AB: Didn't spoke with him yet, look forward to playing with him.

Do you see similarities between you and Nowitzki and also the Magic's Ryan Anderson? – @Iamfabo

AB: The only similarity I see is that we all can shoot from the three-point line.

If you could, would you welcome a chance to play power forward with Orlando and be paired up with Howard? – @GrantSinnfor3

AB: I don't think Howard is going to be a Magic for much longer.

Will you ever leave the Raptors like Chris Bosh did? – @TheOnlyDalmar

AB: All I can say is that I love Toronto and playing for the team.