Lakerdom is safe, at least for another day

Lakerdom is safe, at least for another day 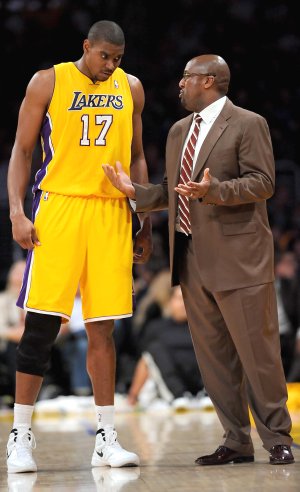 Now that the Lakers are safe…

What kind of safety does a first-round victory afford a new Laker coach and the their two seven-footers with “All-Star starter” on their resumes, who are their most (or only) marketable players?

If the situation may never have been as dire as it looked when Laker VP/ESPN commentator Magic Johnson said a Game 7 loss would finish Mike Brown, Pau Gasol and Andrew Bynum.

Actually, as the team took pains to point out in a statement released before the game, Magic is merely a titular VP, who no longer owns part of the team.

Nor may the situation have been as dire as that Magic described.

On the other hand, it was too close for comfort for Brown, Bynum and/or Gasol, even if some or all of them made it back next season, wearing bulls-eyes.

In any case, a lot of things that were unthinkable two weeks ago would have become thinkable

Andrew Bynum for Dwight Howard, anyone?

Devoted as the Laker organization is, or was until last week, to Magic, they have regarded him as a loose cannon for his 33 years as player, coach, minority owner and titular VP.

It’s true. Not only does he say what was on his mind – and God bless him for it – he bleeds Laker purple as surely as Tom Lasorda bleeds Dodger blue.

When Johnson played, he called the office to ask if any deals were going down so often, PR director Josh Rosenfeld nicknamed him “Dr. Pepper,” after the soft drink that once had 10-2 and 4 on its logo, standing for “Dr. Pepper time.”

If his Laker role is a conflict of interest with his ESPN gig, I’m OK with VPs who err on the side of being too candid for the organization’s comfort.

If Laker trigger fingers may not have been that itchy, Magic was probably close enough for sports journalism.

Of course, he may have been articulating the Lakers standards he knew, set by Jerry Buss in the ‘80s, rather than reading the current situation with the owner letting his son, Jim, who hired Brown and dotes on Bynum, take the lead.

A Game 7 loss might not have really cost Brown his job – now.

Nevertheless, it would have started the clock, putting him on notice: You’ve disappointed us once, don’t do it again next season.

As for Bynum, even 24-year-old seven-foot, 285-pound comers who just started an All-Star Game and are doted on by the owner’s son don’t get to turn a playoff series around with a comment as he did, firing up the Nuggets and messing up the Lakers, announcing closeout games “are actually kind of easy" since "teams tend to fold if you come out and play hard in the beginning."

Bynum has a punky side (carrying a Playboy hostess on his shoulders at a party at the mansion while supposedly rehabbing; parking in a handicapped spot; elbowing JJ Barea; vowing to take more three-pointers after being yanked for firing one up early in the shot clock), but it didn’t stop him from taking quantum leaps, with only injuries slowing his development.

This season, the first one in which he stayed healthy since becoming a starter, he averaged a career-high 19-12.

Leaving out the handicapped parking place, Drew’s stuff was standard NBA diva immaturity to me.

This one, he couldn’t have made up for if he had become Wilt Chamberlain.

If teammates didn’t criticize Bynum, they looked they were upset at him or the situation he had put them in.

Drew, himself, went into a shell, like someone who thought the other four guys out there were mad at him. 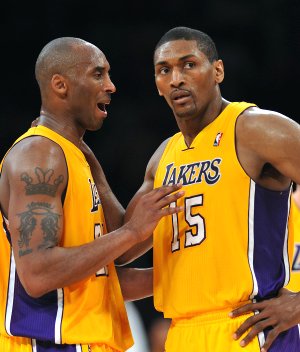 Whatever the reason, it was a bad time for the Lakers to stop playing, as noted by Kobe Bryant, who rose from his sickbed to play Game 6 and called out his teammates publicly afterward.

Here’s how weird it was: Kobe, who wears a scowl and answers questions in a few syllables as possible in the playoffs, became Mr. Charm, if only to show that appearances notwithstanding, they weren’t dead yet.

A Game 7 loss would have haunted Bynum if he stayed or not – the more so since he never manned up to apologize.

(Instead, after the Lakers’ were upset in Game 5, Drew pointed out that he and his teammates hadn’t played hard to put the Denver players in position to fold).

After a season of turning an uncertain future and a grisly start into a promising finish, a Game 7 loss would have changed everything back.

The Lakers, went to camp thinking they they had a chance to land Dwight Howard and Chris Paul, saw their trade for CP3 spiked by the commissioner and found themselves out of the running for Dwight and Deron Williams when they began looking for a package deal.

Gasol and Lamar Odom, who were in the CP3 deal, had to swallow hard and return to the Lakers.

Pau did. LO was so upset, they traded him to Dallas, which didn’t seem to improve his spirits.

The Lakers were left to run Brown’s conventional offense without a conventional point guard, after having been challenged enough in Jackson’s triangle with Derek Fisher and Steve Blake as “initiators,” who only had to make an entry pass and cut away from the ball.

Amazingly, they survived the unrest bubbling under the surface as players lobbied for the triangle through the press, Bynum did his number(s) and Metta World Peace, who started on the bench, noted Brown’s background as a one-time “video coordinator or something.”

By April with Ramon Sessions as the missing point guard, they thought they had had built a new contender around their old nucleus, enabling them to keep both seven-footers to continue playing over teams’ heads in a neatly balanced tandem with Drew in the low post and Pau as a high-post power forward, providing insurance against Drew going down.

Even the suspension that sidelined Metta for the first six playoff games didn’t look like it would hurt for the first four, when Bynum said what he said.

It’s not good to go down the tubes when your bosses are making plans for their/your future.

Disinclined as the Lakers are to concede it, this is a transition season, which they began, knowing they had to reconfigure the team that had been undressed and swept by Dallas. 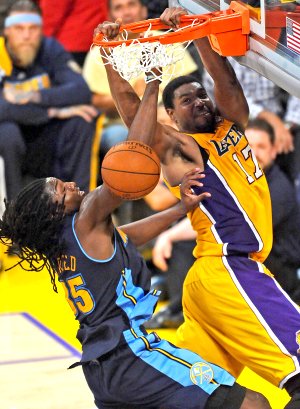 Last impressions counting for what they do – everything – it’s a tender time for the players who are good enough to build around and marketable enough to trade, namely Drew and Pau.

This also goes for any coach whose fate it is to follow the one who won the Lakers five titles from 2000-2010.

To the Laker organization, not winning a title is bad.

Not making the Finals is really bad.

Not making the West Finals is not recommended for coaches who don’t have several years left on their contracts (Brown has three).

Not getting out of the first round means someone has some ‘splaining to do.

Not getting out of the first round after leading, 3-1 and anything could have happened.

On the other hand, all that winning Game 7 means is, you’re in the second round, where losing to the Thunder, which is plenty capable of beating you, will come as a crushing disappointment, just as capable of making the unthinkable thinkable as losing to the Nuggets.

Remember when Lakerdom was drooling at the thought of trading Bynum or Howard?

That was when the Magic, which bought Dwight’s line about being open to staying, asked for Drew and Pau and insisted the Lakers take Hedo Turkoglu, then owed $22.8 million over two seasons.

As you may have heard, things didn’t go well in Orlando. The Magic is now torn between getting Dwight a new GM and coach or – finally – dealing him if he won’t commit to them long-term.

Bynum may not look that bad to the Magic, which said it would have taken Brook Lopez if Howard hadn’t opted in.

It’s supposed to be great to live in interesting times.

For the Lakers, the only good news after one round is, they’re still alive.