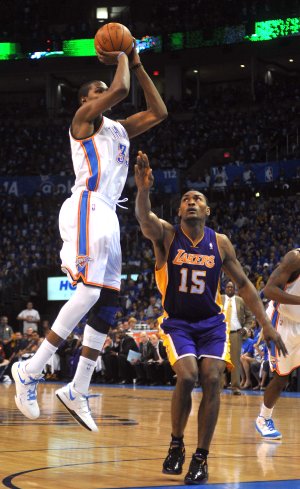 1. Was it just me or in the first playoff game the Oklahoma City Thunder looked like a young Mike Tyson and the Lakers more resemble Lou Savarese?

2. Would anyone object to LeBron James and Dwyane Wade being co-MVPs?

4. Was the process by which David Stern came up with a seven-game suspension for Metta World Peace justified?

5. Had Metta World Peace stepped on someone's stomach the way Kevin Love did, would he have received a harsher punishment ?

6. Is David Stern being the judge and jury really the best system for player conduct violations?

7. Mark Cuban told ESPN, "If you want to nail me for something I'll be the first to admit that it was a huge (expletive) that I didn't fight for the new collective bargaining agreement harder… That was my mistake because once that thing was passed our hands were tied in a lot of respects".

Does that mean that Cuban has finally come to the realization that a system that limits the amount he can spend on his team is not beneficial to him, and the NBA should have a system similar to baseball, where you have the freedom to run your organization they way you want to?

8. Did a Nike designer really say that the reason Rose was injured was that he was playing in inferior shoes and he should have signed with them?

9. Did David Stern really say that he doesn't feel all the injuries that have occurred in this abbreviated season were due at least in part to the rigorous schedule imposed after the lockout ended?

10. Did a lady really run on the court during the Nuggets-Lakers game? How did security allow that to happen?

11. Are the fans a little too close to the court? 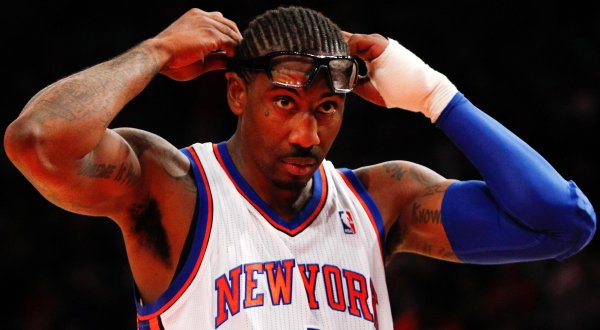 12. Amare Stoudemire allowed his frustrations after a loss to get the best of him by punching through a fire extinguisher, then acknowledged it was a poor decision. Would Knick fans rather him not care or would they rather see him having such passion and desire to win that he let his emotions get the best of him?

13. Do Knick fans value the heart of a team who may come up short but at least went down fighting over a team that quits?

14. Does San Antonio look like they found the fountain of youth to anyone else besides me?

15. How funny was it when Chris Paul's son did the Blake Griffin face?

16. I agree with Jeff Van Gundy it is absolutely horrible that flopping has become commonplace in the NBA. Whatever happened to the discussion of giving a technical foul for flopping, and when exactly did flopping take over the game?

17. Watching the NHL playoffs and the NBA playoffs simultaneously one question comes immediately to mind. Why is it so acceptable to fight in one sport but even the slightest hint of anger or hostility is so drastically frowned upon in the other sport?

18. Would anyone be surprised if Phil Jackson eventually ends up coaching the New York Knicks?

19. Why haven't the Knicks called Patrick Ewing to at least be one of the assistant coaches yet?

20. When a big man like JaVale McGee makes a tremendous blocked shot and sprints down the floor with all his adrenalin pumping, why don't they reward him with a dunk?

21. Magic Johnson said that if the Lakers lost Game 7 Mike Brown would be fired. The Lakers responded by vehemently denouncing the comment as simply that of Johnson the commentator and that they fully support Brown. But if the Lakers had lost Game 7, would Brown have found a pink slip on his desk?

22. Is New York Post writer Phil Mushnick going to remain their employee or receive any punishment after what he wrote about Jay-Z?