Who's next after Van Gundy?

Who's next after Van Gundy? 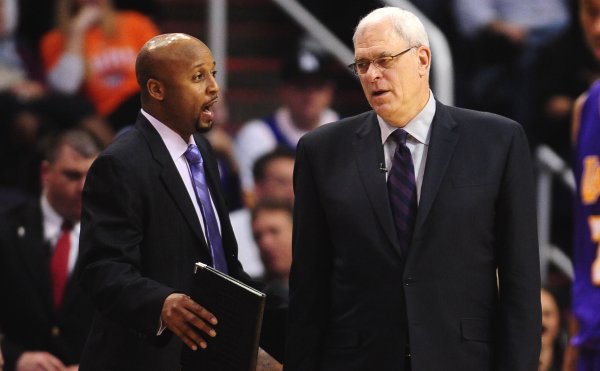 Now that Stan Van Gundy has been forced to make an exit stage-right, there's a long line outside the stage door of leading men hoping to replace him. With the understanding that trading Dwight Howard will radically alter the team's roster, let's take a look at Van Gundy's possible and probable replacements.

The best option, of course, would be Phil Jackson. He reportedly has “the itch” to coach again, and there are numerous reasons on both sides of the equation why the Magic should break the bank and sign him.

He brings the franchise instant credibility and demonstrates that management is serious about winning.

He's the most successful coach in the history of the NBA. And his 11 championship rings might even put irresistible pressure on Dwight Howard to stay put and sign an extension.

PJ is one of the few coaches who insist on devoting considerable time during training camp and in-season practice sessions on fundamentals. A course and reminder in basics that many of the Magic – especially Howard – desperately need.

Jackson's presence would make Orlando an extremely attractive destination for virtually every blue-chip free agent, and would also guarantee SRO crowds for every home game.

After dealing with ego monsters like Michael Jordan and Kobe Bryant, and loose cannons like Dennis Rodman, working with Howard would be a piece of cake for the Zen Master.

Jackson specializes in taking teams that are thisclose to being serious championship contenders and bringing them to the next level. And Orlando is only three players away from having the capacity to win the very last game of the season: A combo big man who can score and rebound, a quick-footed wing who can create his own shots and a bigger point guard to facilitate the switching defense that Jackson favors.

Orlando is a warm weather city, another important attraction for PJ.

But remember that back when MJ was a free agent, Jackson ridiculed the idea that Jordan might sign with the Magic opining that Orlando was a “plastic city.”

If Jackson's three techno-joints (two hips and a knee) prohibit him from being the hands-on coach that he wants to be, then it's doubtful that he'd return to the command seat. Even so, the Magic have to do whatever they can to woo him.

Who are the other viable candidates?

Paul Silas has the presence, the experience, and the in-your-face honesty to help the Magic. Plus he relates to big men in a way that shorter, non-player coaches cannot. Give him an assistant who specializes in Xs and Os and Silas would be a good fit.

Mike D'Antoni would made the Magic an entertaining team, but to suit his hot-footed offense Howard would have to be traded for a slew of runners and shooters, and Steve Nash would have to be signed. Even so, D'Antoni is another NBA coach who (falsely) assumes that pro players have mastered fundamentals and only teaches offensive sets and defensive rotations.

Flip Saunders does his best work with veteran players who know how to win. Too bad for the Flipster that the Magic are light years away from this. Also, it would take three extra-large moving vans just to transport Saunders play book to Orlando.

Paul Westphal can't get along with immature hooplings who won't accept personal responsibility for their mistakes and shortcomings. Although he's still an excellent coach, the debacle in Sacramento probably ends his career.

Brian Shaw is ready. An astute student of the triangle, Shaw has an immaculate resume. Like his mentor Jackson, Shaw is not afraid to speak his mind, a trait that the DeVos family might find embarrassing. Also, most teams are afraid to hire rookie coaches, preferring to play it safe and hire someone who was good enough to have already been hired elsewhere. But the success that Scott Brooks has had in Oklahoma City demonstrates the wisdom of having a young coach and a young team grow together. 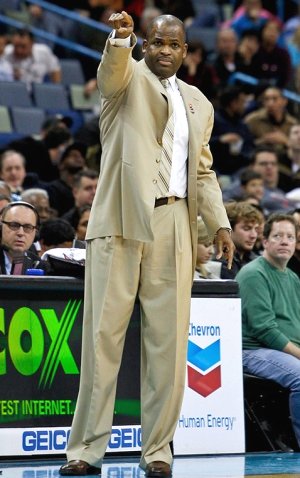 It says here that, if Jackson can't be Disneyfied, if Silas is fatally tainted by Charlotte's record-breaking losing season, and if Shaw is deemed to be too much of a risk, then Orlando's best bet would be Nate McMillan, and here's why:

He's hard-assed enough to demand and get respect from everybody except the most self-involved, mindless players.

He has the righteous and powerful charisma required to lead men into “battle.”

The general game plan of most coaches who had played in the NBA reflects the way they themselves played. Since McMillan was named to the All-Defense team (1994, 1995), led the league in steals (1994), and set a record for assists by a rookie (25 in 1987), he emphasizes defense and unselfish ball movement.

He knows the ins and outs of the pro game.

He's a teacher both on and off the court.

He conducts his business with dignity and honesty. What you see it what you get.

Since the Magic's roster will necessarily be comprised of several players who are strangers to each other, McMillan's ability to forge a team's identity would be extremely valuable.

To recapitulate, the Magic should try to recruit Jackson. If that doesn't work out, McMillan should be their coach of choice. And either Shaw (if Howard can bring young players to Orlando) or Silas (if the roster is loaded with veterans) would be a more than satisfactory third option.

So, perhaps even more critical than the hiring of a new coach is the return Orlando will receive in exchange for Howard.

Watch this space for further developments.