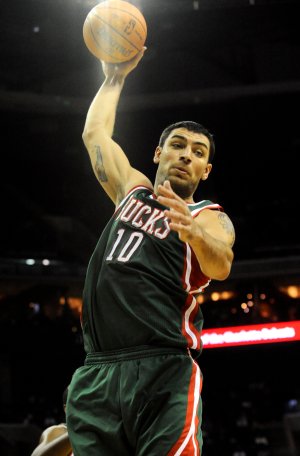 In the middle of a recovery from sports hernia surgery and heading into free agency this summer, Carlos Delfino is still talking as if he sees himself as part of the Bucks' future. The Argentinean swingman is currently going through rehab in the small northern Italian city of Asiago, not far from his former home of Bologna, where he played for Fortitudo before entering the NBA. Delfino feels optimistic about making it in time for the Olympics, which he could use as a platform to showcase his skills after a tough year in Milwaukee.
Although the season ended on a sour note for him with the Bucks, given the results and his injury problems, Delfino is still eyeing a comeback to the team.
"Last year was a bad experience, but it was a experience and I hope we build on that for the future," Delfino told HoopsHype. "I felt very involved with the club in the last three years, had a good time and would like to stay. Overall, those three years were positive and would like to remain with the team.
This will be the second free agency summer for Delfino. The 6-foot-6 swingman ended up passing on the NBA the last time, in 2008, signing with Khimki Moscow instead. It was a time of riches in European basketball and money was good, but Delfino says he regretted that decision.
A return to Europe is not out of the question, but the NBA is the clear priority.
"As of now, I'm not really contemplating the possibility of returning to Europe," Delfino said. "I'm not closing that door, but I want to give myself the chance to finish out my NBA career on a good note, not with this injury-riddled final two months. If I had a good offer on the basketball side, I would consider it. I always look at the basketball side. Only once I made a decision based on money [signing with Khimki ] and it didn't work out well for me."
Delfino, an Olympic champion with Argentina in 2004, would have no qualms about playing in London without a contract, a likely scenario since he will probably be in the second-tier group of free agent shooting guards behind the likes of Eric Gordon, Ray Allen, OJ Mayo, Jason Terry or Nick Young.
It's health alone that will determine whether he plays or not for his third Olympic medal in a row with the Argentinean National Team.
"If I have to go to the Olympics without a contract, I'm going to do it," Delfino said. "I'm going to do it as long as I feel good physically, but I'm not playing if I'm not healthy. It doesn't matter if I have a contract or not by then."
Argentina, a veteran-heavy squad with little depth, could really use Delfino's contribution. As of now, it sounds like there's a good chance they can count on it for the Games.
"I think I will make it in time for the Olympics. I'm in the middle of a difficult part in the recovery process. It's when you feel OK and you want to do things and the doctors tell you to calm down.

"But I feel good about the injury. I'm recovering well, running a little and doing basketball activities this coming week hopefully. I don't want to rush."