What Miami and Oklahoma City need to do

What Miami and Oklahoma City need to do 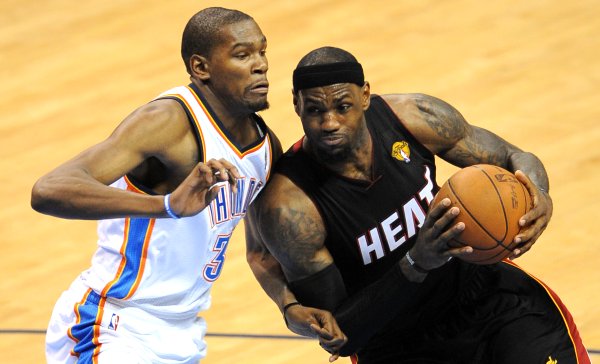 This year's Finals are living up to the billing. The history of success in the NBA almost always favors the team that has been there before (like the Heat) or a team that features superstar players that realize the window is closing. The Thunder are trying to prove not only that a first-time entrant can win the title, but also that they can do it with four guys that should be one year removed from the end of their college careers.

I am excited about this series because we will see everything you want within a basketball game: Splendid shooting, creative forays to the basket, high-flying dunks, at-the-rim blocks and stellar individual defense.

But most importantly, we will be exposed to some of the best behind-the-scene storylines that will keep the fans craving for more.

– Will LeBron finally win a title and be the one who closes in the fourth quarter?

– Will Kevin Durant make an argument that he should have won MVP? Is he the best player in the world and not LeBron?

– Will Dwyane Wade show the consistency that made him a superstar?

– Will Russell Westbrook get caught up in his own game and shoot the Thunder in the foot?

– Which bench will actually step up consistently and give his team a better chance to win?

After two games, I am leaning towards Miami because they have outplayed the Thunder in six of the eight quarters, but we have a long way to go and the bottom line is the series is tied and home court will mean nothing. 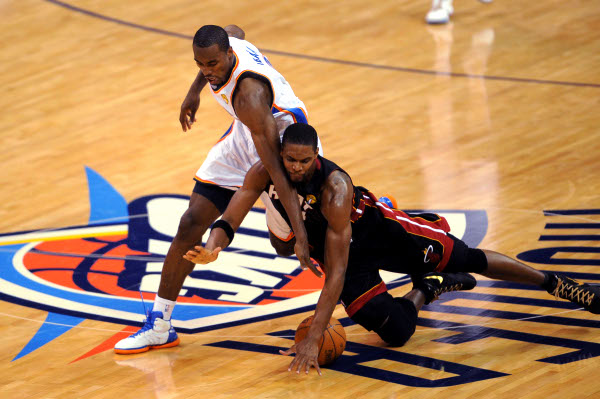 THE THUNDER WILL SEIZE CONTROL IF THEY…

Get off to a good start

For two straight games, the Thunder got off to poor starts and that is a recipe for disaster. Miami has the best perimeter defense in the league and that is kryptonite for a team that loves the perimeter shot. The Thunder has to start attacking the rim early in the first quarter and not wait until they are down 2-18. Challenging the Heat early at the rim could produce fouls on key players, if not points, and that would be a huge problem for the Heat because of the inability of their bench to produce.

The Heat has straight gangstered the Thunder in the post early in games – with LeBron especially – and that has produced layups, three-point shots and free throws. The Thunder is not a physical team, so they need cohesion defensively to allow Serge Ibaka to change shots. James and Wade are two of the best ever at bullying to the basket. Oklahoma City has to do this by committee. If not, they will find themselves in trouble every game.

Allow role players other than Harden to get touches

The Thunder will not win a championship with only three scorers in double figures. Shane Battier is scoring 17 points a game in the Finals and that has to be matched by a collection of players from the Thunder. Scott Brooks has to trust his bench similar to what Rick Carlisle did with the Mavericks last year against the Heat. This gives Oklahoma City a chance to wear down James and Wade, who were exhausted as the series progressed last season. Derek Fisher, Serge Ibaka, Kendrick Perkins, Thabo Sefolosha or Nick Collison have to have one of those games no one expects.

I love Westbrook's relentless style, but he must set up the guys I just mentioned above off of his penetration to keep them involved in the game. They can't become watchers.

LeBron has proven during the playoffs he's going to score 30 no matter how he is played defensively. Meanwhile Wade has struggled to find consistency. The one thing the Thunder does not want to happen is both of this guys going for 30. Wade needs to see bodies in front of him. Oklahoma City will struggle to stop him if they fail to follow the Celtics' blueprint to defending Miami. THE HEAT WILL SEIZE CONTROL IF THEY…

Continue to attack the rim and post up James and Wade

Oklahoma City has no answer for James in the post when he is committed like he was in Game 2. This is what the Heat did to start the season and it produced high-percentage shooting for both LeBron and Wade. Historically nothing bad happens when you get good deep post position with players who can score and pass out of double teams. The Thunder got back into both games every time the Heat's Big three started floating out to the perimeter and taking fatigued shots.

Continue to get contributions from Battier offensively

Shane Battier has been the MVP for Miami after the first two games. He is guarding every key player on the Thunder and he is knocking down three-point shots at a 70 percent clip. The Thunder will undoubtedly start treating Battier like teams treat Durant by staying at home defensively. When that happens, Mario Chalmers, James Jones, Mike Miller, Norris Cole and Udonis Haslem must step up and make open shots.

Get back on defense

The Thunder ran the ball on the Heat at will in Game 1 and got it going late in Game 2. Miami has great speed, but OKC has even greater speed, so we saw Bosh really being the only threat on the offensive glass because the Heat did not want to give up easy shot opportunities. Since the Heat realizes Oklahoma City has no viable post-up offense, they want to take their chances just making them shoot outside the paint. Quick shots and turnovers usually lead to layups for the Thunder, so it is important for the Heat  to play offensively as close to the vest as they can

James will get his numbers no matter what, but Wade needs early touches. Bosh is in the same scenario with his ability to pull Perkins and Ibaka away from the rim to allow Wade to do his thing offensively. Wade has taken his lumps in regards to inconsistency in the playoffs so far and so it's up to his teammates to make sure he is encouraged to be in attack mode early and often.

I am amazed the Heat continues to help off of Durant even when he is on the strong side. The cardinal rule defensively on any basketball team when it comes to guarding a great shooter is not to help out off of him – especially when he is standing one pass away on the strong side. Durant only needs a split second to get a shot off, so I don't care who is guarding him when he catches and gets a view of the rim. He is deadly and will make you pay at the slightest thought of stepping away from him defensively.