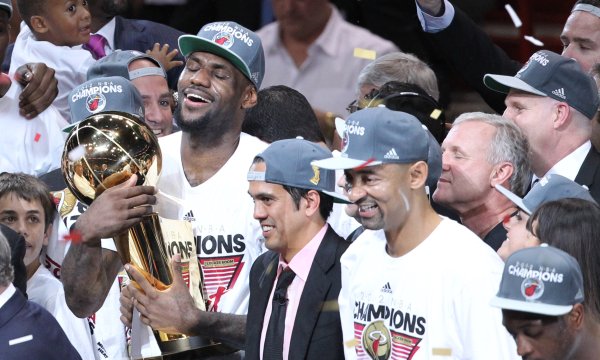 In overcoming the superior athleticism of the Thunder, as well as LeBron James' MIA performances in his previous Finals appearances, the Heat have finally lived up to the media hype and their own boasting. Here's how what happened came to pass.

They had more to prove than Oklahoma City (especially LeBron), so they were hungrier and much more focused.

After their slow-down, slug-it-out series with the creaky Celtics, Miami needed a game to adjust to the speed, length, and athleticism of OKC. Once they got their game-plan figured out, they settled into a highly productive comfort zone.

LBJ finally made a full and constant commitment to being involved from opening tip to final buzzer, and from baseline to baseline. In so doing, he asserted his inherent greatness – rebounding, passing, posting-up (something he'd always been reluctant to do), and making big plays in critical situations. Call it maturity resulting from frustration.

Although, D-Wade had been there and done that, he was able to make a seamless transition to being a support player.

The rim-defense and off-ball movement of Chris Bosh made a significant difference.

Shane Battier shot the lights out, played his usual ornery deny-defense, and even negated the considerable size and power advantage that Kendrick Perkins had in the low post. Above all, Battier never lost his cool.

Even though OKC's defense mostly neglected him, Mario Chalmers filled in the blanks when he had to.

Got surprisingly plus-rotations from Norris Cole and James Jones.

Except in countering Russell Westbrook's assaults on the ring, Miami's interior rotations were virtually flawless – as evidenced by the many charging fouls they drew.

With the same exception, the Heat showed quick helping-hands on OKC's lane penetrations.

Nobody ever gave up on a play and they all hustled to the max in defensive transition.

Serge Ibaka was more right than wrong in evaluating LBJ's defense. James is big, strong and wide, making him an outstanding deny and on-the-ball defender before his man puts the ball on the floor. However, James lacks the lateral quickness to keep speedsters in front of him when they initiate their dribbles. Even so, he's still a wonderful helper who does an excellent job of reading offenses.

In their halfcourt sets, they compensated for their iffy outside shooting by relentlessly (and successfully) challenging OKC's vaunted interior defense.

Just about every weakside screen produced a makeable shot.

Following LBJ's example, the Heat invariably made the extra pass.

The Thunder was well-scouted: Both Kevin Durant and James Harden had trouble making accurate passes on the move, so the passing lanes were poached for profit.

They showed incredible poise when behind and also in the clutch.

With notable exception of Joey Crawford, the refs gave Miami a 55-45 break on most questionable calls. 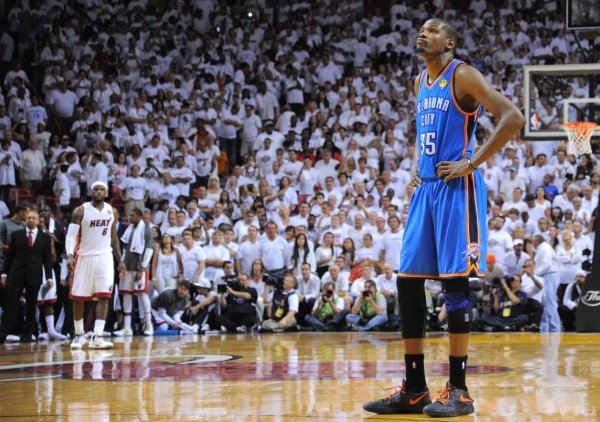 Their much ballyhooed interior defense, i.e., Ibaka and Perkins, was largely ineffective. That's because too often they were out of position, slow to react, and also showed up too far under the rim.

The Thunder's screen-roll defense was even worse, allowing the rollers multiple layups and dunks. Their transition defense was worse still. And early on, Oklahoma's perimeter defense routinely neglected to tag Battier.

Nobody stepped up to stop the ball when Miami was on the run.

Scott Brooks and his staff never figured out how to deal with LeBron in the low post. Nor how to counter Miami's double-high-post screens.

Boxing out was a sometimes thing. Subsequently, they failed to protect their defensive glass.

Thabo Sefolosha battled throughout the series, but was ultimately overpowered by James and out-maneuvered by Wade. Also, Sefolosha made some horrible decisions with the ball.

Given that Perkins is an excellent post-up defender, there was nobody for him to guard. If he failed to take advantage of the undersized defense of Bosh and Battier in the pivot, he didn't do enough shot-blocking, rebounding, or pick-setting to justify his considerable playing time.

Derek Fisher hit a few important shots in Oklahoma, but as the series wore on Little Mister Big Shot too often played like the oldest rookie in the league.

Because neither Fisher, Westbrook, nor Harden are true point guards, the offense lacked a facilitator and had to rely on predictable isos and screen-rolls.

Ibaka was virtually useless, a stranger in paradise.

For the most part, Durant either launched jumper or zipped hoopwards. This, despite the fact that his pull-up jumpers were unstoppable.

Harden was shaky with the ball, and lacked confidence in his shots.

The Thunder's performance at the stripe was below their usual high standards. Harden, for example, missed whenever he leaned backward on his release.

Westbrook scored points by the dozen, but he also overhandled on too many possessions, forced shots, and ignored Durant. Westbrook was the main reason why OKC's halfcourt offense frequently stagnated and lacked sufficient ball-reversal.

In the second half of Game 3, the Thunder took advantage of the realization that most defenses are designed to counter frontal attacks by looking to penetrate from the baselines. This strategy was never reprised for the duration.

OKC might have been courageous, but they were inconsistent throughout and absolutely abysmal in too many endgame situations.

Only Durant and Westbrook demonstrated their capability of playing at a championship level.

Overall, the Heat's previous Finals experience (no matter how fruitless) and hard-driving motivation, trumped the superior talents that the Thunder brought to the fray.