Meet the grandson of Showtime

Meet the grandson of Showtime 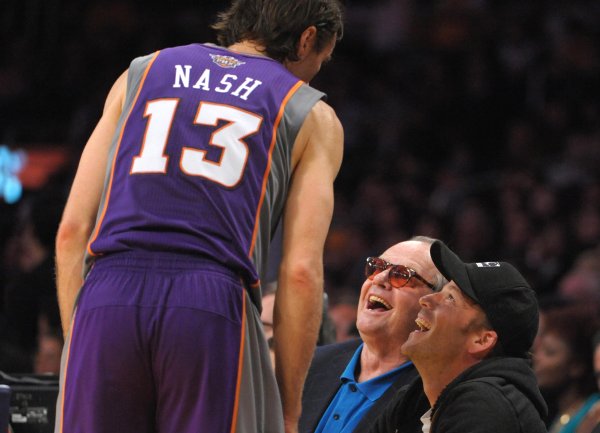 This is more like rebuilding, Celtic-style, bringing in a veteran to fill a key role, as Red Auerbach did with Bailey Howell, Paul Silas and Dennis Johnson, et al, and Danny Ainge did with Kevin Garnett and Ray Allen.

Who cares if the hulking Lakes get even slower while the game speeds up – in what used to be Laker Ball – with this spring’s Final Four teams going so small, LeBron James jumped center for Miami most of the postseason?

There’s not a lot you can guarantee in this league but the sign-and-trade bringing free agent Steve Nash for bubkus will revive the Lakers.

Whether it revives them past Oklahoma City and/or San Antonio remains to be seen, but here’s something else you can guarantee: This didn’t come as good news in the Thunder and Spur front offices.

The blueprint Jim Buss recently laid out to the Los Angeles Times’ TJ Simers was a monument to caution: Pau Gasol wasn’t going anywhere. Instead, they would put him in the low post, where he would regain his form. Where that would leave Andrew Bynum, the better low-post threat of the two, wasn’t discussed.

The Lakers weren’t in the hunt for Deron Williams, or even Kyle Lowry or Goran Dragic.

Only in recent days was Nash’s name connected with the Lakers. As a headline in Wednesday’s Los Angeles Times noted, “Laker rumors include an old name (Dwight Howard) and a new one (Steve Nash).”

Nash was in New York, where he lives in the offseason, being wined and dined by the Knicks and courted by the Toronto Raptors, keen to bring Canada’s greatest player home.

With Nash expected to choose New York, the Knicks were reportedly close on a sign-and-trade, sending Iman Shumpert and Toney Douglas to Phoenix. 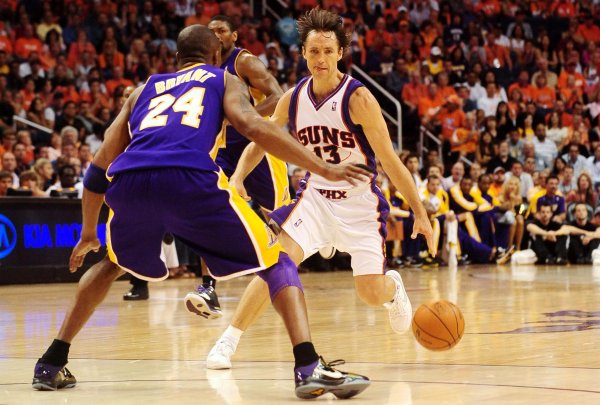 Instead, with Bryant calling to urge him to come, Nash asked the Suns, who’d have preferred to see him go anywhere else in the universe, to trade him to the Lakers.

"I approached them [Suns] and asked if they would be willing to do a sign-and-trade deal with L.A. because it is very important to me to stay near my children and family," Nash said in a statement.

"They were very apprehensive and didn't want to do it. Fortunately for me, they reconsidered. They saw that they were able to get assets for their team that will make them better.”

Talk about your cavalry riding over the hill…

Brown, a defensive specialist, runs a trust-your-big-guy offense. This was OK in Cleveland because LeBron James, a de facto point guard, would give up the ball (even if people wondered why the Cavs didn’t run, with the game’s most devastating open-court player).

No one ever confused Bryant with a point guard. Derek Fisher and Steve Blake weren’t playmakers but triangle point guards, who just had to make entry pass and cut off the ball.

Under Brown, the ball kept winding up in Kobe’s hands, whereupon he took on on however-many defenders were guarding him, got off the best shot he could, and even made some.

Bryant had a better season than anyone knew, stifling teammates’ grumbling about Brown, the more so after Fisher was traded, going into the finale at Sacramento needing 38 points to win the scoring title.

Instead, Bryant sat it out, showing where his heart really was.

Nevertheless, he wound up shooting 43 percent, his low since becoming a starter in 1999.

Nash is an offense, all by himself, freeing teammates with adroit pick-and-rolls or pick-and-fades, and, at 38, as deadly a shooter as he ever was (53 percent, 39 percent on threes, 89 percent on free throws).

If Kobe looked bouncier, coming off surgery in Germany, he may look like he’s 25 with a crack-shooting playmaker setting him up for a change.

Nor will Nash carry his burden of recent seasons, playing alongside Kobe and two All-Star caliber seven-footers.

Of course, the Lakers being the Lakers, reaching the West Finals or even the NBA Finals won’t be enough.

In the good news for the Lakers, at least they’ll be the Lakers again.