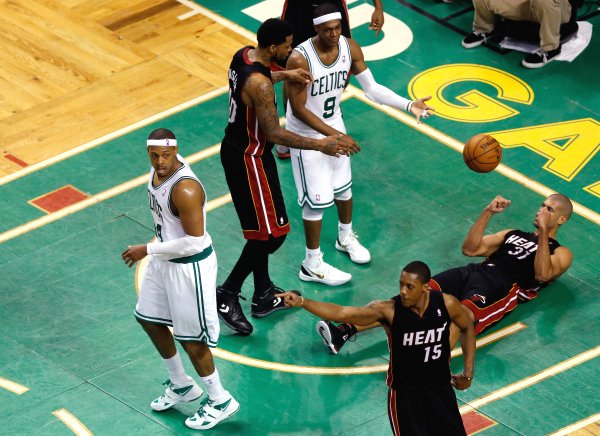 In the 2012 NBA playoffs, we witnessed many star players suffer from foul trouble. Paul Pierce fouled out during the series against Philadelphia and Miami. LeBron James fouled out against Boston. Most memorably, Kevin Durant had some serious foul trouble during Games 2, 3, and 5 of the NBA Finals, totaling five fouls in each game.

Offensive fouls, particularly charging violations, have contributed to foul trouble for potent offensive weapons. In recent years, defensive players have become increasingly adept at sliding in front of offensive players, drawing contact from an incoming ballhandler, and then falling to the ground, often by way of the “flop” (which has become trendier than nerd glasses).

A charging foul, one of numerous types of offensive fouls, is particularly impactful because: (1) it results in a turnover, (2) it costs the offending player a personal foul, (3) it often causes the offensive player to play more cautiously (and less aggressively), and (4) it often sparks a momentum shift.

The strict penalties attendant to offensive fouls have caused some, including Jeff Van Gundy during ABC’s telecast of Game 5 of the 2012 Finals, to question whether a rule change is necessary. Van Gundy suggests a simple change: penalizing charging fouls solely as turnovers and not as personal fouls. This change would allow offensive weapons who possess a strong dribble/drive game to remain aggressive.

Players like Durant, James Harden, Pierce, and James would be more likely to be on the floor throughout the game and in the game’s final moments. To the extent that drives to the basket result in contested action in the paint and at the rim, this rule change would probably make for more of these exciting, athletic plays.

However, drawbacks to this proposed rule change are several. First, the rule would favor offensive players in an unprecedented way, making it even more difficult to compare players, teams, and statistics from different eras. It would allow strong and powerful players like LeBron James and Dwight Howard to barrel into the lane with less regard for anything (or anyone) in their tracks.

Significantly, if offensive players have less to risk in careening toward the basket (but maintain the same rewards of being able to draw fouls and get to the free throw line), then they are likely to do it more often. While this could increase dramatic and exciting plays, it may also increase collisions, which jeopardize the health of the NBA’s players, the league’s biggest asset.

Alternatively, with the value of a charge taken reduced, it is possible that defensive players facing increased penetration towards the basket will fear foul trouble themselves, causing them to play softer and allowing more penetration to occur. Because fans enjoy ferocious dunks, some might find this rule change to make for a more exciting NBA. 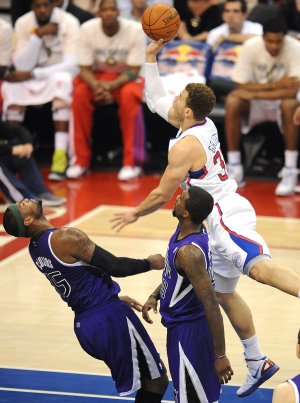 Perhaps the NBA’s best move on this issue would be to leave the penalties as they stand but to slightly re-define the charging foul. Under present rules, a dribbler commits a charging foul when he charges into an opponent who has established a legal guarding position. A “legal guarding position” occurs when the defensive player has both feet on the floor and is facing the opponent.

Even NBA players, some of the most finely tuned athletes in the world, are often unable to avoid contact in such situations. Requiring a ballhandler to avoid contact with a defender by stopping on a dime just split seconds after accelerating toward the basket is likely to increase the risk of ankle and knee injuries which already plague NBA players.

So what gives? For starters, let’s recognize an exception to the charging foul rule which states that an offensive player who is dribbling in a straight line path may not be crowded out of the path by a defender. Perhaps this exception and the underlying rule can be modified such that no offensive foul can occur when an offensive player who has already begun his move toward the basket has an unreasonably short amount of time to react to a defender who has slid into “legal guarding position.”

Such a play would result in a defensive foul or no call, depending on the impact of the contact on the offensive player. Such a change would at least give offensive players the time to react and avoid contact after they have already begun their move. A major drawback to this idea is the subjectivity involved in assessing whether the ballhandler had sufficient time to recognize and avoid contact.

Since the penalties of a charging foul would remain unchanged, the referees would continue to wield significant control over the pace, flow, physicality, and outcome of the game.

Another variation of the same idea would be to require that defensive players be set for more than a split second before absorbing the contact of an offensive player. Like in baseball, where baserunning ties go to the runner, bang-bang plays would be called in favor of the offensive player.

Perhaps defenders could be required to maintain a more formal defensive position before drawing an offensive foul, as opposed to cupping one’s nether region with two hands, as if he were setting a screen. Defensive players could be required to have their hands up, or to be crouched in a defensive stance, or both. Under today’s rules, defenders seeking to draw offensive fouls appear more concerned with getting planted and selling the contact than actually doing anything that would practically defend the offensive player’s move.

Such a system incentivizes players who can frustrate offensive by obstruction, not through active defense. While obstruction is of course a form of defense, it is defense at its most passive and uninspired. 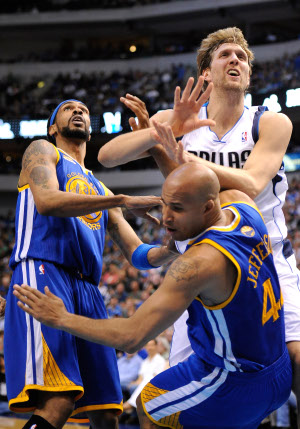 Another idea might be to extend the Restricted Area (RA), the semicircle beneath which a help defender may not draw a charging foul. By extending the RA, help defenders seeking to prevent paint penetration would have a very difficult time of stopping the dribbler. If the RA were extended, a help defender with his hands up and in good defensive position would not be able to draw a foul even if the offensive player had time to avoid the contact. This would allow offensive players to barrel through defenders in very good defensive position and, thus, is not a good or fair solution.

To be a foul, the contact giving rise to the foul should be initiated by the fouling party. In the case of a last-second charge (i.e. a driver who cuts off another driver and then slams on the brakes), the defender is at least equally guilty of initiating the contact, as he has moved into the position for the sole purpose of absorbing inevitable contact.

The NBA’s competition committee needs to reconsider the league’s policies on charging fouls. Because of the significant impact of these fouls, defensive players have practiced flopping in order to draw them (possibly at the expense of practicing actual defense).

Commissioner David Stern, who has committed himself to rooting out the trend of flopping in the NBA, should call for a closer look into charging fouls and the flops they engender.