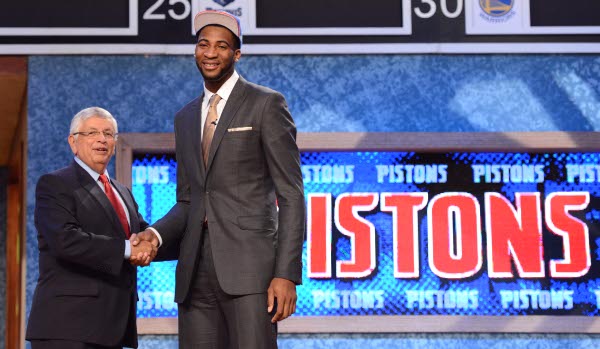 Detroit Pistons rookie Andre Drummond – a graceful, talented giant who could be the steal of the 2012 draft – is the latest in a long line of big men (along with a smattering of forwards and guards) who struggle at the stripe because various coaches and shooting “gurus” taught them to shoot backwards.

Being “coachable” is a good quality for a young player, but only if the coach knows what he’s doing. Unfortunately for Drummond, both as a UConn freshman last season with a short stroke and as an NBA rookie with a longer stroke (currently on display at the Orlando Pro Summer League) he has displayed the backwards form that is the tell-tale sign his instructor or instructors subscribe to the “scientific” approach to shooting.

Such instructors dream of a hoop landscape where every player of every size and shape has the same identical assembly-line shooting motion, the key to which is the position of the shooting hand, fingers and wrist at the completion of the stroke (a position that should be maintained for at least a few seconds).

Alas, this obsession with follow-through positioning frequently leads the students of the shooting scientists to put the cart (the follow-through) before the horse (the stroke). The stroke, such as it exists, is merely the means to an end: the holy pose that, in theory, guarantees jumpshooting and free-throw success.

These poor, deluded players (Dwight Howard, Evan Turner, Jason Maxiell, DeAndre Jordan, Ryan Hollins and Andris Biedrins, to name a few) are so obsessed with a mental image of “putting the hand in the cookie jar,” “holding the gooseneck pose” or, worst of all, “holding an elevated gooseneck pose,” that it short-circuits or supplants the stroke. The latter is illustrated in this New York Times photo of Marion Jones, when she was preparing for a WNBA tryout. In the summer of 2006 a young shooting scientist taught it to Andrei Kirilenko, who proceeded to have the worst season of his career and probably set an NBA record for most wounded-duck jumpshot airballs. During that season I sent letters to various Utah Jazz personnel explaining what had gone haywire with Kirilenko's shot but never got a reply.

Rather than allowing their natural stroke to determine what their follow-through looks like – as countless non-scientific shooters have done successfully for decades – the backwards shooters put their faith in the quack wearing the white lab coat. Worse, they keep it there, one putrid month after another – and in many cases one putrid season after another – faithfully and foolishly waiting for the day when everything magically clicks.

Even if you somehow manage to be adequate from the stripe with such a delivery, it’s most unlikely that you’ll ever be a good mid-range spontaneous jump shooter, someone who can shoot instantaneously and instinctively when an opportunity presents itself from 12 or 15 or 17 or 13 feet, sometimes leaning or fading, sometimes banking, sometimes wide open and straight up. That requires touch and feel, two qualities tough to maintain if your mind is focused on a highly technical and probably unnatural finishing pose.

Some of these players (Dwight Howard, for example) have been under the spell of one or more shooting pseudo-scientists (whether in private practice or bona fide NBA assistant coaches) for so long they’ve lost touch with their natural stroke. Other bricklayers may never have had a natural stroke to call their own. I suspect that’s the case with Biedrins and perhaps Drummond. 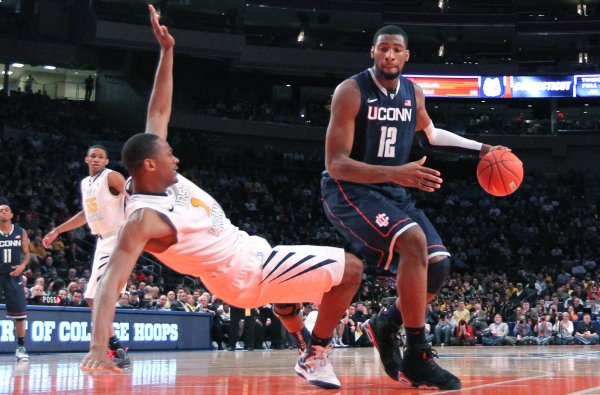 Most kids learn to shoot through trial and error till they find something that works for them. But if you get shoe-horned into organized ball right from the start you might miss out on that all-important experimental phase. So right off the bat you’re getting all this technical instruction on how to shoot like somebody else who may not be a good model for you. Or maybe he’s a decent model but the coach is a rotten teacher. Or maybe you have some distinctive physical characteristics that would lead you to excel with a homemade stroke (as has been the case with many NBA and college greats) if your coaches would just get out of the way and allow it to develop over time.

It looks like Drummond needs a trial-and-error phase trying out different types of strokes suitable for a big man while he frees his mind of any and all concerns about follow-through poses and positions. (That’s assuming he doesn’t have a pretty decent natural stroke from his high school days worth resurrecting and polishing.)

Shooting is much more art than science. His current coaches would be doing him and the team a favor by encouraging such experimentation rather than molding his shooting motion in the manner of a mad scientist obsessed with pounding square pegs into round holes.