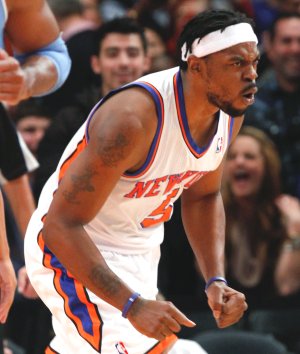 This is Bill Walker, formerly of the Boston Celtics and New York Knicks. I'm a free agent now and will blog about my experiences this summer here at HoopsHype. Hope you find it interesting.

Recently I met with people from the Memphis Grizzlies in Las Vegas and previously with the Cleveland Cavaliers and the Atlanta Hawks. It was not a personal type of interview, just business. They want to know how you are going react to certain things and see what your responses are. I think if you go in there with that type of attitude, willing to accept criticism, you'll be fine.

Sometimes the questions are personal but at the end of the day this is a job and your employer wants to know what type of guy they are getting. They are in charge, so they have the right to know, to ask you anything they want to. That's my view.

This is a man's game and obviously they are looking for mature guys. You figure that out pretty quickly in the NBA. I have played in two great teams, the Celtics and the Knicks. When I went to Boston, I was young and I was used to being the man on my team. It was a big adjustment for me, but every guy has to go through that kind of thing.

As of now, I'm trying to get in the best shape I can. Conditioning is huge in the NBA. If you're in great shape, you can have great success out there.

I'm working on my body, but also on my game, which has changed quite a bit ever since I entered the league in 2008. I was predominantly an in-the-paint type of player in college, so I had to expand my game. I played with some great pros like Ray Allen and I was able to learn some things from him as far as shooting. It paid off for me. I think the area I have improved the most is my jump shot.

Right now I'm in no rush to make a decision. I'm just trying to become the best that I can be and things will work themselves out.

Looking at the free agency moves, I think Steve Nash going to the Lakers is definitely a powerful move, especially what he brings to the table as far as knowledge of the game, being able to facilitate… Deron Williams staying was huge for the Nets going forward. They are going to be formidable with Joe Johnson. There will be a star rivalry in the Big Apple: You have Amare Stoudemire, Melo, Tyson Chandler and then you have Williams, Johnson and Gerald Wallace. It's going to be fun to watch. I played in New York and I most definitely would like to return there. We'll see.

That's it for now. Talk to you soon!