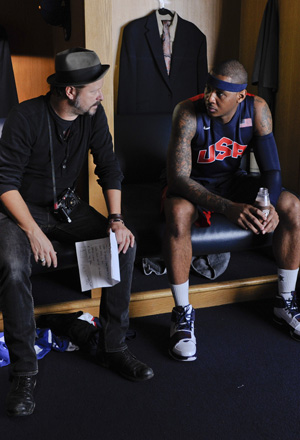 Knicks forward Carmelo Anthony hosted a Facebook chat with Got Chocolate Milk? earlier this week while in Las Vegas with Team USA. Anthony talked about the Knicks, the Olympic Games, his workout routines and his future, among other things.

On what the Knicks need to be a contender:

"We got to get guys back healthy. I believe in the team that we have with the additions of Jason Kidd, hopefully getting the Jeremy Lin thing done. Novak, Amare, Tyson… We have a very deep team, we just have to make it work."

On the Knicks' offseason moves:

"I think bringing Jason Kidd and Marcus Camby will definitely help us in our journey to get to a championship. Hopefully we can re-sign Jeremy Lin. We're making great strides and it's just a matter of us coming together and willing to do what it takes to win."

On how he stays in shape:

"I changed my diet up, my workout routine. I'm doing lot more of different type of workouts. I go on track and field, boxing and, of course, basketball. I'm in a gym from 8 to 12. That's normally my workout time. I go to the track, I get back on the court, I lift weights in a full hour time period, and I have the rest of my day off after that."

On his eating habits:

"I try to get at least three meals a day: breakfast, lunch and dinner, with a light snack in between, especially right now when I'm getting ready for the Olympics. But sometimes, when I take time off you have 'cheat days'. Maybe in the middle of the week or on Sundays. I use to take my son and my family to eat pizza on Sundays. You're allowed to one cheat day.

On his favorite thing about basketball:

"My favorite part of playing basketball is just being able to go out there, compete and play against the best players there's out there, and to know that each and any time I step on the court somebody is trying to take my spot. That's what I love about basketball: the competition."

"I never get tired of basketball. I've been doing it since I was 9, 10, 11, and I still have the same amount of fun I was having back then now."

On what to improve:

"Just my overall game. The most important thing is just being in top-notch shape. Everything else just fall in the place… and just try to turn some weaknesses into strengths."

On winning a college championship:

"There was no better feeling. Just to go to college, step on that campus, nobody knew what to expect, nobody had any faith in our team that year. We came together, we had fun, we blocked everything out and we put together one hell of a run, one of the best runs in college basketball history."

On playing the 4 on Team USA:

On rivals in the Olympics:

"We don't fear any team, but we have scouts and people like that to watch other teams playing. We watch films. But as athletes we try to do the best that we can as far as preparing ourselves mentally, physically. As far as the teams or the countries, I think everybody will be a challenge, just for the simple fact that us, as the United States, have a bull's eye in our back and everybody will try to bring their A-game and try to beat us."

"Everybody is healthy, everybody is in shape, everybody understands what's the task at hand, so we're definitely excited to get over to London and get this thing going."

On what he does outside of basketball:

On the new neighbours in New York (the Nets):

"I hope they're not that loud. I like to keep things quiet."

Happy about career so far?

"Absolutely, yes, I'm happy with my career and the exciting part is to know what's next, and my goals for myself and my team, and where we're heading at."

On the teammates he's the closest to:

"Me an JR Smith have been together since Denver, so we go way back 7-8 years. Amare, we've known each other since high school. Shumpert became very close. But believe or not, I have a very good relationship with everybody on the team."

Favorite player to play against:

"My favorite player to play against is Kobe, maybe LeBron, even Durant. Just playing against those guys is a lot of fun."

On his number being retired in Syracuse:

On playing with Puerto Rico:

On possibly winning the NBA championship this season:

"If we do what we have to do, and everything plays its part and everybody stays healthy, we have a great shot."

"Jeremy Lin can be very, very good. He's young. This is his second year in the league, his first time actually playing in the NBA, so he's definitely taking advantage of this oportunity. I don't think you've seen the best of Jeremy Lin yet. We're hoping he comes back, he's prepared and ready. For what I'm hearing he seems like he is."

Winning a silver medal would be a failure for the Team USA?

Who is going to be the most dangerous rival in the Olympics?

"A lot of people say Spain will be our biggest competition."

Who are you closest with in the NBA?

Favorite song to listen before playing?