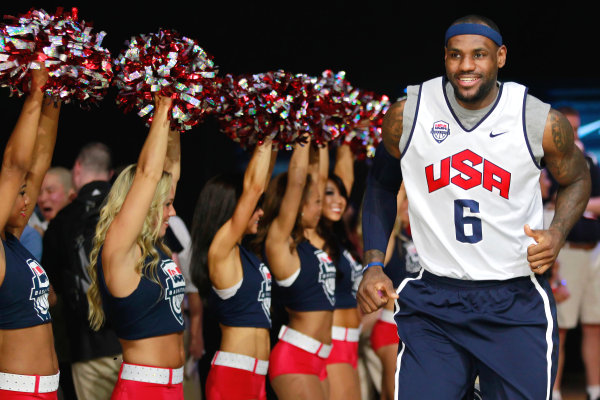 What was the prevalent feeling after winning the title? Happiness? Relief?

Do you think basketball is going to be more enjoyable for you now that some of the pressure is off?

You have played in the NBA this season till late June, you go to the Olympics now… It's going to be a lot of months in a row playing basketball. Are you going to approach the way you start the NBA season in a different way?

You took fewer three-pointers this season.

LJ: I just changed my approach. I decided to stay away from the three-point line and going to the post. Make it a little bit easier for myself and for my teammates. I got more and more comfortable going down there and it was a success.

How do you think your game is going to evolve in upcoming seasons? Are you going to become more of a post player?

LJ: I can see that happening. I feel very comfortable down there, more comfortable than I've ever felt in my career. So I would see myself down there a lot more, and work my game from there.

You averaged almost 10 rebounds in the playoffs this year. Is it a goal for you to average 10 rebounds during the regular season?

LJ: I've never set a statistical goal. I just don't do that, I set team goals.

What changed on the team this year?

LJ: We all changed. We all came into the season better, more focused. We did that, we all had one collective goal and that was winning the championship.

What was the critical point for the team this year?

LJ: There were so many. It's not just one. We had injuries, setbacks, we were against the wall. And we came back from that and made it good.

How was when Chris Bosh went down to injury?

LJ: I wasn't nervous. It was something that we didn't want at that period of time. You know the playoffs is the biggest moment of the season. When one of your best players goes down with an injury and he doesn't have a timetable for his returning, it was like air was out of the basketball.

Do you think you win the title if Bosh doesn't recover in time?

LJ: No, I don't think so. We needed everyone to compete at the highest level.

You became an unpopular player among many NBA fans once you signed with the Heat. Did you make a conscious effort to change that, to become more liked by people?

LJ: I don't care if I'm more liked or more wanted by people. People are going to have opinions about me no matter what. For me, as a player, I'll try to do what it takes to win, and off the court I am who I am. I can't change what people think about me.

You're going to become a free agent again in two years. Are you looking forward to that?

Would you go through free agency again or would you rather sign an extension with the Heat?

LJ: I don't know. I haven't even thought about it. Right now the only thing I think about is preparing and getting ready for London to bring home the gold medal again.

Was it enjoyable for you the last time you were a free agent?

LJ: Enjoyable? No. It was very stressful.

How would you compare this American Olympic team with the team from four years ago?

LJ: We're a different team. We're faster, we have a lot more guys in their prime. We're more explosive offensively. We have the chance to be really good.

Would you say this is likely the last time for you with the American team?

How would you define your career in one word?