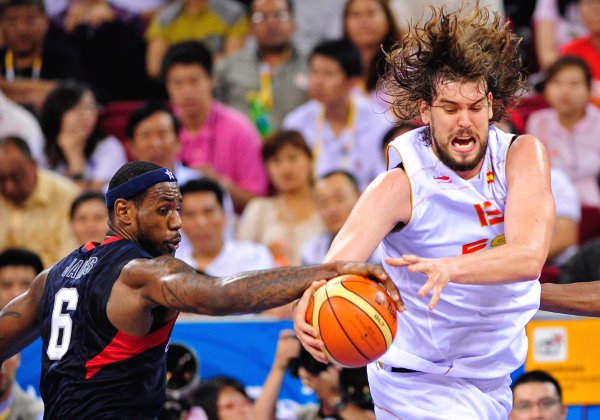 Which American player do you find the most dangerous playing FIBA basketball?

Marc Gasol: I like Kevin (Durant) because he makes it easy. He doesn't need to do much. He doesn't have to dribble. He just gets the ball and shoots it. He plays well with the ball and off the ball. But with those guys, you have a No. 1 guy and then you have 1B, 1C, 1D and so on. Kobe (Bryant) is also a very dangerous player. He'd be dangerous even with cricket rules. LeBron (James) is also scary. They all have their tools.

Jose Manuel Calderon: They are all very, very good players. They are dangerous no matter what the rules are. Kobe Bryant, Kevin Durant, LeBron James… They all have great tools. There's really not one main guy. They are a team and all of them can hurt you.

Rudy Fernandez: I think Deron Williams proved he can adjust to the international game very well when he was in Europe. Also Chris Paul. They are players that know how to play the game, they read the game well and are very good ballhandlers.

Juan Carlos Navarro: I think it's Kevin Durant. He proved it in Turkey [at the World Championships], his style of play is amazing.

Sergio Rodriguez: I think it's Durant. He scores so easily. He is showing he can play with all types of rules… He'll play just at the same level. Maybe the rest of the players are more physical… They haven't used Kobe at all as of now.

Victor Claver: The point guards and the best shooters – like Kevin Durant.

MG: We don't analyze that much. It's still not the right time. We are still a work in progress ourselves. As the tournament progresses and we can see real games, we'll find out.

JMC: We keep that to ourselves.

RF: The low post. If we play down there with Pau (Gasol), Marc (Gasol), Serge (Ibaka), we have an important advantage. However, when they attack we will have difficulties because they are smaller and they move very well on the court.

JCN: Sometimes they don't have bigs in the paint, so with Serge and the Gasol brothers we think we can hurt them a little bit.

SR: It's difficult but I think we have the edge inside. They don't have as many bigs as we do. They play lots of minutes with threes playing the center position, so we hope we can take some kind of advantage out of it.

VC: They don't have true centers. They make up for it with the perimeter guys. They are very physical and can play inside too.

Which American team is better: the Barcelona '92 team or the current one?

MG: Who has created this debate? They have, right? On a bad day for the '92 team, the current team would lose by just 15 or 20 points against them.

JMC: It's impossible to compare. That '92 was breathtaking and we grew up watching them. (The current team) is also very good and if they win the gold medal, then you can start comparing. I don't like to compare. It's different players and different generations.

RF: No disrespect to this current team, but I would choose the '92 team. We all grew up with that team, I lived in Barcelona at that time, the players were amazing and they were the stars on their teams.

JCN: They are teams from different eras. Both are great teams, but I especially liked the '92 Dream Team. I was young and my favorite player was on that team: Michael Jordan.

SR: I would say the Dream Team. That team in Barcelona was special for us Spaniards. Now we have two All-Star players, a lot of players on this team have played in the NBA… Something that was impossible to even dream about 20 years ago.

VC: The current team has to prove it. The '92 team was the Dream Team, they won it all and they were dominant.

What was your opinion on the officiating at the 2008 final vs. Team USA?

MG: You can't take away credit from them because of the officiating. It's the most beautiful game I've ever been a part of. Talking about the officiating means you're overlooking what a great game that was.

JMC: Wow, I don't even remember that.

RF: Well, that's water under the bridge. It's true that there were some missed traveling calls but that's in the past. We have to focus on the London games and hope the games are called with FIBA rules and not NBA rules.

SR: They are accostumed to playing a different style, with other rules. I don't think the officiating was a key factor.

VC: It's difficult. They are not accustomed to playing with international rules. Sometimes the refs take that into consideration and sometimes there's some missed traveling calls.

Raul Barrigon contributed to the article.