David Robinson: "The Spurs should have won this year"

David Robinson: "The Spurs should have won this year" 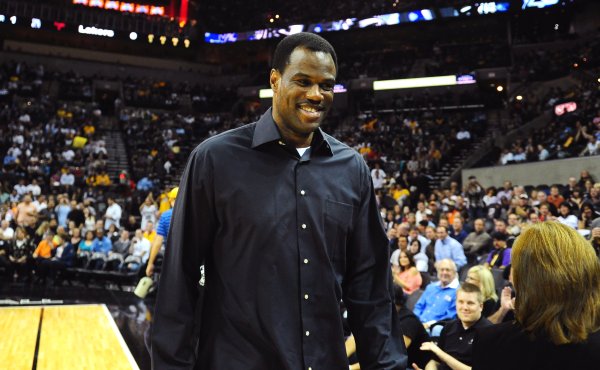 Did you have any doubt Tim Duncan was going to re-sign with the Spurs?

David Robinson: Of course not. I mean, he's the franchise. It's hard to build the around young guys, build a new team without having that kind of experience – the Manu [Ginobili], the Tony [Parker], the Tim… Those guys are the core. I knew he was going to re-sign and I'm just glad to see that happen. He still can play a few more years, he's very solid. He's such a smart player. I think we're still in the mix, we're still very competitive. They should have won this year.

What did they miss in order to win it all once again?

DR: It was just the consistency. The young guys kind of got a little bit shaken up and they stopped doing what they did. They were playing so great… We were getting points off the bench, but all of a sudden we got nothing the last four games. Same thing happened to the Thunder. Their bench went south in the Finals. They got no help, it was just [Russell] Westbrook and [Kevin] Durant all the time. You gotta have the balance, especially for an older team like us. We have to have that balance. Our guys will be a year older, a year more mature… I think we're gonna be better. We'll be right there again next season.

What's the secret of the Spurs?

DR: Great management. That's the thing. We don't have the sponsorships, the dollars to spend, the free agency… 'Why would I go to San Antonio?' We've had a hard time drawing those guys in. So for us to have built the team over the last 15-20 years is a minor miracle. And financially be able to afford that… You know, look at the Thunder… How are they gonna keep these guys? It seems like it's gonna be impossible. They did an amazing job these last few years in Oklahoma and that's basically what [Gregg] Popovich and RC Buford have done down there in San Antonio for the last 20 years.

The Spurs have had a great eye drafting international players.

DR: Yeah, Manu, Tony.. You have to build a team the right way. We've done that. We've found good talent in the draft but we also made pretty smart free-agent deals. And we don't try to build the team through free agency. We've used the core guys and then we've had pieces like Boris Diaw or Patty Mills… Bringing guys that are gonna make this team better. They've done a very very nice job.

You got your ring playing with Duncan, but earlier you were close to playing the Finals with teammates like Dennis Rodman.

How much involved are you with the franchise and the city of San Antonio?

DR: I'm still a part-owner and do owner stuff, but other than that I just encourage the guys. I don't really do the business things for the team, I just like to be part of this organization… I'm more of a cheerleader than anything else.

You recently purchased the Hilton Garden Inn in Houston. Can you comment on that mix of real state investments and charity?

DR: It's a nice balance. I started the business to support the things I like to do in the community. So we built a school in San Antonio. I like schools so that's one of the things I support. But in order to support those schools, we did the business. And the business is the real state: we buy hotels, we buy office buildings… The money that we make off that is spent in our community efforts. So if we do good business, we'll be able to do a lot. So far it's going very, very very well. We've been at it for about three years now. This has been our first fund. We've raised a little over a $100 million, we bought a few places and things are going very very well.

So you're following the business steps of Magic Johnson?

DR: Well, yeah, hopefully! I'd like to have some of the success he's had. We talk to him a little bit and the thing is that he's a couple of years ahead of us.

The Dream Team. For you it was a little bit different, playing in Barcelona after losing against Arvydas Sabonis and the Soviet Union in 1988.

DR: It was tough. In 1986 we beat them in the World Championship finals, so we knew what to expect a little bit. But they got us in 1988… It was frustrating, difficult knowing that it that was the first U.S. team to lose without controversy since 1972. That was difficult, but it happens. They were a very good team and they beat us. So I think it was the right choice by USA Basketball to go ahead and bring the pros in. On the world stage, it obviously made a huge difference for the quality of basketball worldwide.