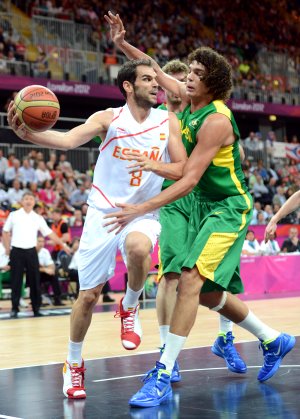 Leandro Ginobili, brother of Spurs guard Manu Ginobili and a media personality in Argentina, created a minor storm on Twitter Monday when he accused the Spanish National Team of throwing the game against Brazil in order to avoid playing the United States till the Olympic final – should they make it that far.

Leandro, the eldest of the Ginobili brothers, used crude language to do so, calling Spanish players "pussies" (roughly translated) and pointing at the lack of fight in the final minutes of the game, when the Spaniards were trailing on the score and looked to be in no rush to score or foul.

A 14-year veteran of the Argentinean League, Ginobili now says he's sorry for the foul language, but otherwise stands by his words, which made  headlines in the Spanish media Tuesday.

"If you understand just a little bit about basketball, it should be clear that Spain didn't want to win the game," Leandro, who writes for sports newspaper Ole and does color commentary for state-owned TV station Canal 7, told HoopsHype. "I would be OK with giving the main guys on the team a break, but not with the attitude displayed. When you're 5-6 points behind with two minutes to go and you don't foul and you play long possessions, that's strange, right?"

Spanish players like Jose Manuel Calderon and Rudy Fernandez went to Twitter Monday night to defend the team's effort, but Leandro is not buying that.

"Spain has been the top FIBA team for the past five years, but they put a stain on the sport," Leandro said. "Their attitude was uncalled for."