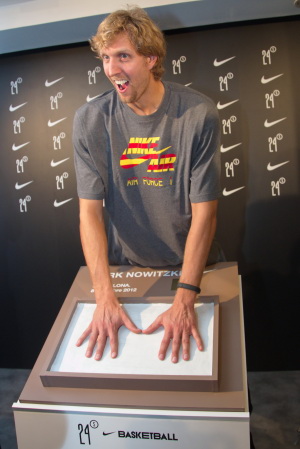 Do you feel the Mavericks are any closer to the top teams in the Western Conference following last summer's moves?

Dirk Nowitzki: Well, the summer started very frustrating. We went after Deron [Williams] and he decided to stay in New Jersey. Then we were thinking maybe Dwight [Howard] might come to Dallas and he went to Los Angeles. And then Jet [Jason Terry] and J-Kidd decided to leave, which really hurt me because they are great friends of mine. So the summer started pretty frustrating but then I think we turned it around a little bit. We made some nice moves. I like [Chris] Kaman, I like [Darren] Collison and [OJ] Mayo in the backcourt, I like Elton Brand as a backup for me or Chris… That makes us competitive, but it's going to be a tough year. Oklahoma and L.A. are definitely the heavy favorites in the West.

Were you active recruiting free agents?

DN: I talked to Deron some and he actually said he would love to come. He's from Dallas… That was around the beginning of July or the end of June. I think he was interested. He met with our guys, he met with coach Rick Carlisle, he met with Donnie [Nelson]… They flew out there to see him at the beginning of July… I think it was close, but he decided to stay in New Jersey and have his future there. You can't be mad. It came down to us or them. I wish him the best. We gave it our best shot and he decided against us and that's fine.

What about Steve Nash?

DN: I didn't see that one coming. Nobody really did because Phoenix and L.A. always had this rivalry over the last five, six, seven, eight years… I didn't think they would sign-and-trade him to L.A., so that was a little bit of a surprise. But I'm happy for him, I mean he's in a big market, in a team that can win with Kobe [Bryant], Dwight and Pau [Gasol]… I mean, that's a great team, I'm happy for him and we'll see how far they can go.

What do you think OJ Mayo can bring to this team that Jason Terry couldn't?

DN: Well, he's younger, he's only 24 and I think Jet is 35. I don't think there's anything on the court that Mayo can bring that Jet didn't bring, but he's younger, more athletic, little bigger too. Jet is only like 5-10, maybe 6 feet. Mayo is a little bigger, little stronger… But we want OJ to kind of take that role Jason had: make big shots in the fourth quarter, maybe run some pick-and-rolls as a two-guy, come off the pick shooting, spread the floor from me when I'm isolated… We want OJ to play like Jet just with a bigger body, we want him to make big-time shots.

During your years in the NBA you have seen a lot of players come and go. When did it really sink in for you that the NBA is a business?

DN: That was early on… Probably when we let Steve [Nash] go… You know he's one of my closest friends. Then we let [Michael] Finley go, another one of my close friends… Then I figured at that point that this is a business and you have to make tough decisions. And then over the years you have to deal with it. Maybe you are frustrated for a day or two but then you gotta move on, you gotta look forward again. That was the same this summer when Kidd left, Jet left. I was frustrated but I'm looking forward and hopefully we can have a good team again.

DN: It began a long time ago. When he first bought the team, I think that was like 12 years ago now, he was our No. 1 fan, he was at every practice, every game, he flew with us everywhere on the plane… So we spent a lot of time around him at the beginning and we just really got to know him. Just a great guy, he helped me numerous of times off the floor as well when I was struggling, just talking to him or helping me out.

DN: Just stuff off the floor that I went through in my life or certain things I don't really want to talk about. But he was always there. When I needed a friend to talk to or help from, he was always there. That was good to know. He always backed me, he believed in me. We go way back. When the free agency came two years ago in 2010, we had a great meeting. We said, "We've been through so much stuff together, it doesn't feel right to go somewhere else." So we decided to make another contract and fight it out. And then we won the championship the year after, so that was great.

You are never leaving Dallas, are you?

DN: It doesn't look like it now. I've been there for 15 years, that's like almost half of my life. I found a lot of new great friends there, won the championship there… We achieved a lot and had a great time, so I don't think it's going to look like I would be leaving now.