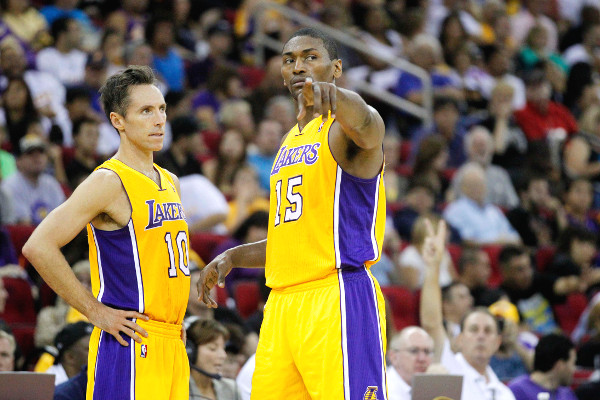 Because the whole is less than the sum of their parts, the Los Angeles Lakers will not be as good as advertised. Here are the specifics:

– There’s no nay-saying Steve Nash’s genius, yet it should be noted that the only time he played with a pivot-bound center (Shaquille O'Neal in Phoenix) the outcome was disastrous. That’s because Nash’s sphere of influence was drastically reduced; especially his penchant for driving along the baseline under the hoop and forcing all defenders to track him and turn their backs on their man-to-man assignments. This tactic opened up cutting lanes galore. Not to mention the 38-year-old Nash’s back issues, that were mostly controlled by the celebrated training staff in Phoenix and whose unique approaches cannot be duplicated elsewhere.

– With all of his positives, Dwight Howard’s poor free-throw shooting won’t allow him to touch the ball in clutch situations. Also, even though he’s a wonderful help defender, he is unable to contain any opponent who can turn, face, and either shoot or go. And when Howard is doubled on the move, he can only make the simplest out-passes – the ones easiest for the defense to anticipate and ambush.

In addition, Howard has always been susceptible to committing dumb fouls. This problem will be exacerbated because Nash’s vastly inferior defense will result in Howard’s having opponents’ point guards in his lap all season long. Subsequently, Howard’s chronic foul trouble will only get worse.

Expect lots of pick-and rolls involving Nash and Howard. The proper defense for this tactic is for Howard’s defender to make a quick show while staying attached to Howard, while Nash’s defender goes under the pick. This will prevent Howard from rolling hopward, and at the same time force Nash to shoot 20-30 times per game – something that Nash does not want to do, and that will take everybody else out of the offense.

But Howard’s biggest shortcoming is his profound lack of maturity. Because of all the above – and until proven otherwise – it says here that Dwight Howard is a loser.

– Let’s face it: Having already played 1,381 total games and 51,018 minutes during his sixteen-year NBA career, Kobe Bryant is an old 34. Last season, with a depressed assist-to-turnover ratio and a shooting percentage from beyond the arc of only 30.3 percent, it’s clear that Kobe is not nearly the player he used to be. Nor was his defense at his usual high level. He’s even talked about his plans to retire.

Even with his diminished effectiveness, will Kobe let Nash dominate the ball? Whose team will the Lakers be – Kobe’s or Nash’s? Don’t believe any of the malarkey that Kobe spouts to the media. In truth, he’s the same play-aborting, selfish player he always was.

– If Andrew Bynum’s jumpers had an acceptable range of 12-15 feet, Howard can only score when he’s in the shadow of the basket. This will make Pau Gasol even more of a jump shooter than he was last year, thereby wasting his effectiveness as a scorer and passer in the low-post.

– Mike Brown has hired Eddie Jordan with the specific purpose of installing the Princeton offense. Basically, the offense traditionally relies on the threat and actuality of perpetual back-door and misdirectional cuts. However, with Howard clogging the pivot, these cuts will gain nothing.

Indeed, the Princeton offense is essentially a high-post offense. And while Gasol is an ideal fit here, Howard is definitely not. Moreover, the offense requires players to read the defense and then react – an awareness that Howard has never demonstrated. The offense is also based on quick ball-movement that will essentially limit Nash’s handling-time.

So what to expect from this team?

Because Howard runs like a guard, Nash thrives in an up-tempo game plan, Kobe is still a world-class finisher, and even Gasol can get up-and down, the Lakers’ excellent defensive rebounding will generate both devastating fast breaks and early-offense situations. It’s when the Laker must play halfcourt basketball that their problems will become more evident.

As demonstrated by the Lakers in 2004, the combination of multi-superstars – Shaq, Kobe, Karl Malone, and Gary Payton – is no guarantee of a championship.

A final and most critical reason why the Lakers will be hard-pressed to overcome both the Thunder and the resurgent Spurs, and stand no chance of usurping the Heat, is that Mike Brown is, at best, a mediocre coach.