Lakers at the crossroads

Lakers at the crossroads 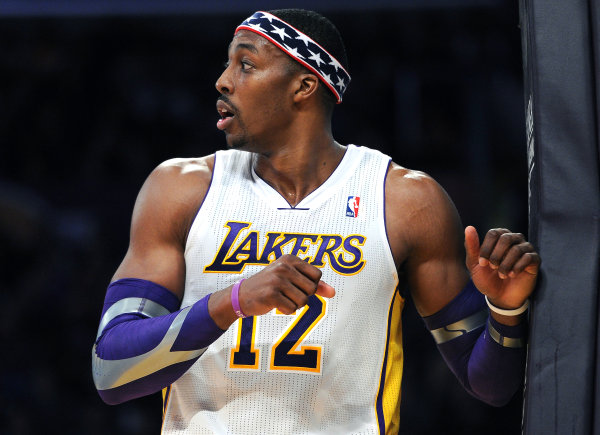 Not that Laker fans don’t trust them, but when the Fabulous Buss Boys bypassed 11-time champion Phil Jackson for no-time champion Mike D’Antoni, it was as if all Lakerdom, up to and including Magic Johnson, arose to ask:

Not that there weren’t problems with Jackson… like his relationship with Jeanie Buss, which sent GM Jerry West fleeing, involved Phil in the Jim-Jeanie sibling rivalry and put Jerry in the middle.

On the other hand, Jackson was the devil they knew, aside from winning them five titles.

Now that the Busses peculiar dynamic has led in a new direction, you can understand fans’ dismay, knowing, as Abraham Lincoln would have put it, that no team divided against itself can stand.

On the other hand, why should their dysfunction be a problem at this late date?

Once merely colorful, the Lakers have been out of their gourds since 1996 when Shaquille O’Neal and Kobe Bryant arrived, followed in 1999 by the convention-defying, trash-talking, so-called Zen Master, taking the zaniness to a new level.

They also won three titles with Shaq before trading him and showing Phil the door, holding off Kobe’s demands… and winning two more titles under – yes! – Phil.

That made 11 titles since 1969 when Bill Russell won the last of his 11, securing the Lakers’ place as heirs to the great Boston dynasty over the latter-day Celtics and the ‘90s Bulls, who each won six.

(If Boston fans prefer, the Celtic titles in 1974 and 1976 can count with those of the Russell teams, making the great Boston dynasty even greater with 13.)

(The Lakers’ place as its heir would remain secure, with 10 titles since 1976 to the Bulls’ six and the latter-day Celtics’ four.)

The Lakers are obviously smarter than they look – it helps to have carved out a niche as star players’ preferred destination – and lucky, to boot.

So this will work out again, like the 2007-08 season that started with Bryant excoriating the Busses, demanding to be traded, and ended with Kobe as MVP and the team in the Finals?

D’Antoni would have been a great hire… if Jackson hadn’t been available.

Since Jackson was not only available but intended to accept the job the team had offered, anything else would trigger the “PR backlash” that GM Mitch Kupchak acknowledged discussing.

Unfortunately, the standard of proof is title No. 12, which may be beyond anyone coaching the game’s biggest, most skilled (33 All-Star selections), oldest, slowest starters and a bench that was being outscored by 20 a game.

In the part no one likes to talk about, while winning a title would be nice, they have things they have to do:

If you remember, he didn’t want to come for the longest time and his contract is running out (assuming he doesn’t re-up for one more year, again.)

The Atlanta (Dwight’s home town) Hawks will have two max slots. The Dallas Mavericks may be able to get to two.

A Laker implosion – a looming possibility with their 1-4 start under Brown, in which they failed to lead in the second half of any of their losses – might mean farewell, Dwight.

And then where would they be, seeing as how…

No. 2: Dump enough of their $100 million payroll to get under the luxury tax threshold (currently $62 million) by the end of next season.

Otherwise, the team that has paid luxury tax as long as there has been one, will pay it for the rest of time, with the new, ever-escalating repeater penalty.

It’s no coincidence that the Lakers have one contract that goes beyond next season, Steve Nash’s.

Everyone else will be up, even Bryant, whose $30.5 million salary will come off the books.

It’s one reason Bryant muses about retiring. If he stays, they’ll ask him to take a cut of, oh, say, 50 percent. No team will have $30 million worth of cap room. And Kobe isn’t someone who regards a pay cut as “just one of those things.”

With the Lakers approaching this future-defining crossroads, it’s the stretch drive for Jerry Buss’s long-running campaign to save $500 million or so they may owe in inheritance tax when he dies, so his kids can keep the team.

It didn’t hurt D’Antoni’s candidacy that he was prepared to work for the $4 million they offered – less than the $4.5 million they’re paying Brown not to coach this season and next.

No. 4:  Secure the succession from Jerry to his kids.

Buss didn’t want to re-hire Jackson in 2005 with the team in the toilet post-Shaq, but acceded to the wishes of Laker fans who would have represented more than a “PR backlash” if he hadn’t.

Bringing him back a third time would have been like acknowledging that he, not they, were the Lakers.

Jackson’s people suspect Buss was leery of complications in his succession plan with Phil there for two seasons and two more as a consultant, possibly even triggering a Jeanie-Phil vs. Jim fight for control.

For the record, here are all the things that didn’t happen:

Jim Buss didn’t nix him. Instead, he told reporters he never really had any problems with Phil and went to his house with Kupchak to offer him the job.

Only Jerry Buss could have turned the process at the last moment, when all involved thought it was Jackson’s job.

At 8 pm, Pacific time, D’Antoni’s agent, Warren LeGarie told me, resignedly and not happily, he knew it was Jackson’s job to accept or reject.

At 9:45 pm, as the Lakers-Warriors game in Staples ended, Kupchak called and, according to LeGarie, said, “Let’s make a deal.”

LeGarie was so surprised, he said his reply was, “C’mon, Mitch, you’re not using us are you?”

Lakerdom went up in smoke that smolders still.

In ESPN’s studios in L.A. Live, right across the street from his statue outside Staples, Magic Johnson, once the definition of “insider” as franchise player, coach and co-owner, now as dismayed as any outsider, announced, “I love Jerry Buss. I don’t believe in Jim Buss.”

Even Jackson stopped smiling his Cheshire Cat grin long enough to tell the Los Angeles Times’ Mike Bresnahan the Lakers handled it in a “slimy” manner.

To me, it’s just what happens when the paterfamilias changes his mind at the last moment.

Whether they lost their minds remains to be seen but one way or the other, we’re talking about more than the 2012-13 title, like the direction of Laker history.