Rounding up the usual suspect

Rounding up the usual suspect

Why is it not surprising that Pau Gasol’s getting all the heat, with Kobe Bryant, his most steadfast defender, telling him to “put on his big boy pants” and adjust, already. If that sounded hard, Bryant actually said it in a manner so whimsical, Laker writers are still arguing among themselves whether he called Pau out.

Asked delicately about Laker “frustrations” after losing to Orlando, Kobe volunteered Gasol’s name… even if Pau watched the last 6:00 from the bench when the Magic scored 30, count'em, 30 points.

No biggie, bro, you know I got your back, but can you see about getting your diaper changed, too?

It was ever thus. When the Lakers won, everyone called Gasol “the most skilled big man in the game.” When they lost, they replaced “skilled” with “soft” as if he had been Wilt Chamberlain in the good days.

Unfortunately, the Lakes haven’t won a title since 2010 with their towering team that was getting older and slower. If Mike Brown was an uninspired choice, he didn’t make them big and slow. If Phil Jackson presided over the fall from grace that started in the 2011 Dallas sweep, they won’t have him to kick around any more.

There’s always Metta World Peace, a flak-taker supreme, who didn’t force the Lakers to sign him, making him a hulking misfit from his arrival in 2009 (with a monster redeeming moment in Game 7 of the 2010 Finals). At the five-week mark last season, Metta was averaging 5.0 and shooting 32 percent but now he’s playing well (go figure).

Bryant knows coach Mike D’Antoni sees Gasol as the old piece that doesn’t fit in the new fast-paced offense. (D’Antoni’s benched Gasol for the fourth quarter in his third game, a loss in Memphis. Asked what he was thinking, D’Antoni said, “I thought I wanted to win.”

Bryant also knows his future, the team’s future and D’Antoni’s future are inseparable. A pratfall this season and who knows if the Lakers will remain the Lakers with Dwight Howard, their only major contributor under 32, finally becoming a free agent.

For his part, D’Antoni is living for one thing, next week’s return (they hope, they hope) of Steve Nash. Then, Nirvana? Maybe. Or maybe not even Phoenix. D’Antoni’s system is built around the high pick-and-roll Nash runs so well, which Raymond Felton wasn’t bad at, and even made a star of Jeremy Lin, if briefly. Unfortunately, D’Antoni needs more than a great point, a dominating big man and a superstar lurking on the weak side.

Otherwise, they’d be golden with Howard screening for Nash, obliging defenders to jump out on Steve or rotate to Dwight to avoid getting their heads dunked on, before Bryant gets the ball, assuming they haven’t already scored.

What’s missing are the other guys who can shoot, pass and handle, raining threes to space the floor, spreading defenses out and slashing them to ribbons.
The Lakers start the NBA’s tallest, most skilled unit – and slowest – unit.

The Suns were more like Mike D and the Seven Dwarfs. Center Amare Stoudemire was measured at 6-8 1/2 at the 2002 pre-draft camp. Power forward Shawn Marion was 6-6 1/2, Kobe’s size. They were also unguardable. If you’re not supposed to be able to win titles that way, they might have shocked the world in 2007 if Stoudemire hadn’t been suspended in their second-round series against San Antonio, with no one else left between them and the title but the Jazz and Cavaliers.

It worked with a poor man’s version in New York with Stoudemire, Felton, Danilo Gallinari, Wilson Chandler, et al., leading the NBA in scoring at 107 a game in 2010-11 until management traded all of them but Amare for Carmelo Anthony and there went the neighborhood. Aside from Nash, Bryant and Howard, the Lakers do have a D’Antoni type or two. That’s the problem. There are only two and one, Antawn Jamison, who’s doing nicely with Gasol’s minutes, is 36. 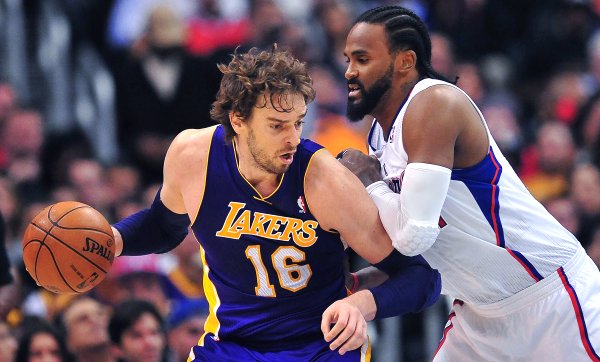 OK, who else can shoot, pass, handle and move around a little? Oh, right, Pau! The irony is staggering. Gasol, suddenly an object of scorn, actually fits D’Antoni’s offense as well as Nash and Bryant, and better than Howard.

Not that anyone has noticed. Bruce Bowen, one of ESPN’s supposed experts, announced the other day that Pau is lost when he’s not “down on the block.” Bowen retired before Gasol became a Laker or he’d have had to notice him at the high post where his shooting and passing ability made him devastating in tandem with Andrew Bynum, “down on the block.”

Gasol’s problem isn’t D’Antoni’s scheme, it’s playing alongside Howard in D’Antoni’s scheme. The triangle ran great with two seven-footers. D’Antoni’s open-court offense is fine with none and can accommodate one at the max. And that has to be Howard, because he’s Dwight Howard.

Howard is a defense all by himself, in theory. This is good because, as he noted, his teammates aren’t helping much. Dwight also has to play because they can’t be yo-yoing him in his free agent season. It’s so important to keep him out there, they just watched the Magic and Rockets overhaul them at the end by hacking Dwight, now shooting 11 free throws a game and making 47 percent.

It’s so important, D’Antoni has to watch it go wrong game after game and try to explain why he keeps doing it. In Houston, someone asked why he doesn’t pull Howard, as Laker fans are calling for him to do. “Because they have no clue what they’re talking about,” said D’Antoni.

Now, of course, come the trade rumors but at 32, making $19 million per through next season, Gasol’s value is so diminished the Lakers are reportedly looking at guys like Toronto’s Jose Calderon, now a 31-year-old backup on an expiring contract.

For the moment, if perhaps not too many moments, they’re trying patience, with Gasol sitting out to rest his sore knee. Fortunately or not, it’s not likely to be career-ending, so forget cashing him in for the insurance money. Showing it may have been tough, but it was meant as love, Bryant subsequently pointed out, “I love Pau like a brother.”

Hey, brothers give each other wardrobe hints sometimes. Of course, while Gasol is still here, they could try bringing him off the bench. Even with Howard playing 36 minutes, that leaves 12 to run the offense through Pau, to remind him he’s still Pau Gasol. It’s worth trying, while the Lakers are the Lakers.