Dikembe Mutombo: "I don't know if there will be another commissioner as good as Stern"

Dikembe Mutombo: "I don't know if there will be another commissioner as good as Stern" 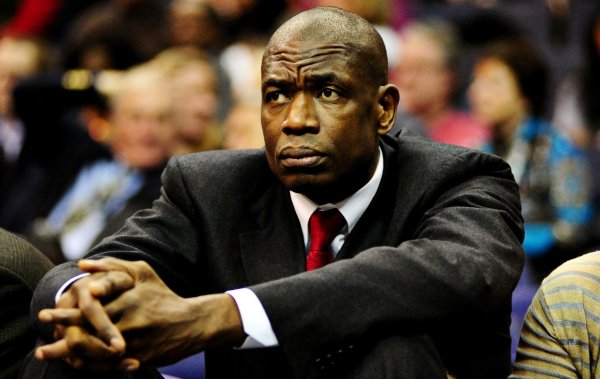 There's been NBA stars in crazy videogames like Shaq-Fu or Michael Jordan: Chaos in the Windy City but Dikembe Mutombo's 4.5 Weeks To Save the World by Old Spice is amazingly funny. Science Bear and Random Turkey are your friends, there's the Gangnam Style Dance, vampire romantic movies…

Dikembe Mutombo: Thank you. I'm glad I got to team up with Old Spice and do this. You know, the Mayan prophecy predicts that the world will end by December 21, and these games gives us the chance and the opportunity to change the Mayan calendar so the world will not end soon.

I feel so much better now. Let's talk a bit about basketball… You averaged more than three blocks per game in eight of your 18-year career in the NBA. Young Serge Ibaka has done it twice so far. What do you think about him?

DM: Ibaka from Congo, the great kid coming out from my backyard… He's learned a lot. Big, big product. Seeing him play at such level and competing every night giving the best of him for his team to success it's great. I hope he can finish up the season like this.

Now you don't have to vote for a center to play the next All-Star Game: It's only backcourt and frontcourt players… What do you think of that? It's because of the evolution of the game? Is the pure center gone forever?

DM: [Laughs] Well, I think it's a new circle that we are going into. There have been similar situations before. Now a lot of forwards are playing the center position. That's the game now, different than when myself, Shaquille O'Neal and others played in the league. We hope more centers will come and revert this situation soon. I think in the next 2-3 years we should see more centers coming from college and from abroad.

What do you think about Dwight Howard and the Lakers?

DM: It's too early. They have too many new players and they need time to have chemistry. I think we must give them time and I'm sure they will be a great team for sure.

You talked earlier about the end of the world as we know it… Well, if it happens, David Stern will not have the chance to step down as commissioner. What do you think about what he's done in the NBA throughout the years?

DM: Our commissioner David Stern has done a wonderful job, and I don't know if there will be another commissioner in the NBA history as good as him, another that will do the great work the commissioner has done. We're so happy about him. I don't think there's anybody that can complain. The great work he has done: from TV, promoting the game, the fans, the Basketball Without Borders program… There's so many things the comissioner has been able to do… I don't know where to start and where to finish.

When did you realize you could have an impact on people and make a better society especially in Africa?

DM: Well, right now there's so many things going on in Africa: Egypt, Lybia, Tunisia, Mali, Senegal, Congo… Lots of rebellions going on, more and more children and women suffering. I hope that our work and my contribution help improve the continent and help the African people.