Josh Smith: "Danny Ferry's winning attitude has trickled down to the coaches and players"

Josh Smith: "Danny Ferry's winning attitude has trickled down to the coaches and players" 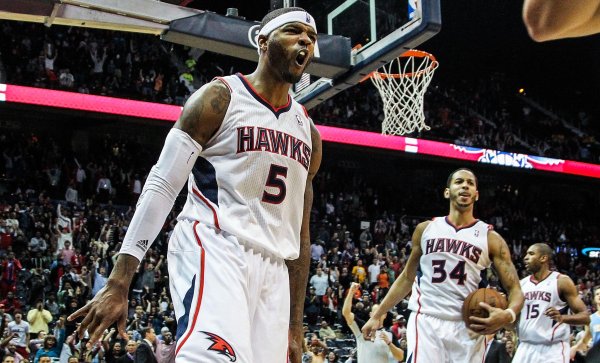 How do you explain the fact that Atlanta has improved with Joe Johnson gone?

Josh Smith: I think that we're playing confident basketball. I think we have a lot of guys that are playing with a chip on their shoulders because nobody was giving us a chace to win basketball games this year. We weren't even supposed to make the playoffs after we made that trade. We're just trying to prove everybody wrong and playing together. We're getting wins.

Are you happy with your role?

JS: I'm happy. It's a bigger role than what I usually had. It's definitely challenging, but I'm up for challenges. I'm excited about what we're doing as a ball club, as a unit.

How has your relationship with the front office changed since Danny Ferry took over?

JS: I've always had a good relationship with the management. It's nothing against Rick Sund, but Danny Ferry worked for a lot of successful organizations in Cleveland and San Antonio, so I think he brought that winning attitude to this team and it has trickled down to the coaches and the players.

Are you happier with the franchise now than you were one year or two years ago?

JS: I'm happy. We've always been a successful ball club, but it's a different feel and a different energy definitely from the past previous years. In Atlanta, a new order is going on and, you know, I'm happy with what's taking place.

JS: It is something special. It's my ninth season and I've played all my career with the Atlanta Hawks. You never know what's going to happen. At the end of the day, you create a certain bond with the organization, a brotherhood with your teammates… But at the end of the day, you have to know this is a business. It would be great to be able to do something like that, but you never know what the future lies ahead of you.

How do you feel about free agency next summer?

JS: This is my second time, but I'm a unrestricted free agent this time, so it's kind of exciting just to be able to experience that for the first time. But you know, I'm just really focused on what's going on right now with my basketball team. I'm not looking further to free agency. I'm just trying to worry about what can we do in order to be successful this year.

How do you feel about the success Mike Woodson is having in New York?

JS: I'm very excited for what he's doing. I'm glad he's having a second opportunity to be a head coach. New York is one of the most dangerous teams inthe NBA right now. They've had a lot of convincing wins. He's getting the job done. What's more surprising is that they are doing it with Amare Stoudemire sidelined.

Magic Johnson said the Lakers should trade Pau Gasol for you. Any thoughts about it?

You have been one of the best players in the last decade not to make the All-Star Game. Do you still get mad about not being selected for the game?

JS: No, I don't. I don't. I mean, my numbers don't lie. At the end of the day, as long as I keep being successful and my teammates see me playing the way I'm capable of playing… If it happens, it happens. If not, I can't worry about me not making the All Star team.

Do you feel you have a better chance to make it this year since people don't have to vote for a center necessarily this time around?

JS: Well, I thought I had a good chance to make it last year and the year before too so (laughs). I don't want to get my hopes up.

At this point in your career, do you work more on refining what do you do well or do you work on improving your weaknesses?

JS: I do a little bit of both. I can always get better as a basketball player, but at the same time I want to work on my weaknesses and make them my strengths. I did a lot of stuff during the offseason, I worked extremely hard on my craft, on getting better and I think it's paying off during the season.