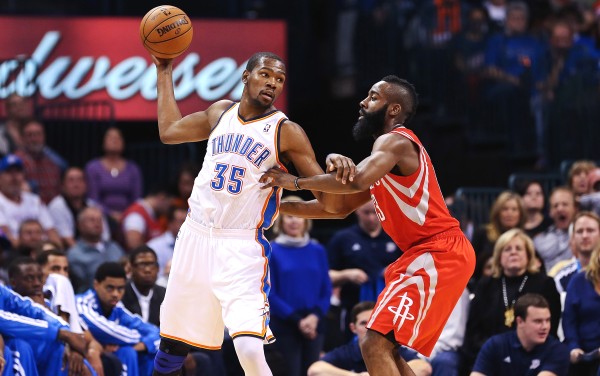 The Oklahoma City Thunder are sending a message to the league: Despite losing a key player, they are still the best team in the Western Conference.

Losing James Harden was huge. He took a ton of pressure off of Kevin Durant and Russell Westbrook, but what we are witnessing is those two can handle a heavier load and seem to be relishing at the opportunity to do so.

Both are high-caliber superstars. Love of the game and winning consume them. It's refreshing to watch nightly. They just get it done with great team work within an energetic system that promotes enthusiasm and unselfish basketball.

I have always said this is a young man's game and if you are talented it will carry you a long way in the marathon of an 82-game season. Case in point: The Thunder's Top 8 rotation players have not missed a game due to injury. Every player has played his allotted 22 games so far. That has to be a great comfort for the Oklahoma City's coaching staff and the major reason they are off to a tremendous start.

Durant is having an MVP season because he has finally realized he does not have to lead the league in scoring. He has put more emphasis on fine-tuning the weaker areas of his game by improving shot selection (50 percent), defense, passing (4.3 apg) and most importantly rebounding (8.5 rpg).

Westbrook has not been chopped liver. He has understandably heeded the advice of many critics and is becoming a willing passer. It has been contagious throughout the team. They are averaging 22 assists up from 18 last year and Westbrook is averaging 8.5 up from 5.5 a year ago. 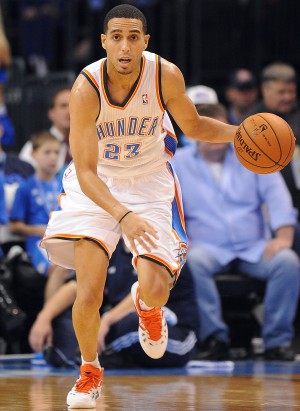 Kevin Martin is not Harden, but he gives them a dimension Harden didn't have and that's playing without the ball and providing them with a player that can score 30 any given night and not take the ball out of Durant or Westbrook's hands. Martin is a potent catch-and-shoot player and herein lays the improvement in the assist category of both Durant and Westbrook.

The player who has reaped the largest benefit from Harden leaving is Serge Ibaka, the most important guy on the team if they are to make it back to the Finals.

Oklahoma City is entering a very difficult stretch with games vs. teams like San Antonio and Miami. With their sights on securing the best record in the league, these games will tell a lot about how the Western Conference will start to shape up before the All-Star break.

I do believe that Miami is still the best team in the league, but the gap is closing. The Thunder should definitely be focused on home-court advantage throughout the playoffs and I believe they can get it if Eric Maynor can return to that solid point guard he was before his knee injury two years ago.

Right now, Maynor is a work in progress and that's having a direct effect on Westbrook, who has to shoulder most of the point guard duties. I believe that affects his shooting.

This is the one area the Thunder should be highly concerned about. The beauty of Harden is he could move over and run their offense even when Westbrook was on the floor.

I would not be surprised if they made a deal or signed a free agent point guard to protect against a Westbrook slump or injury.

Regardless, I am expecting the Thunder to be right there when it's all said and done. The road will probably end up leading to Los Angeles… And I don't mean the Lakers.