A deficit of passion?

A deficit of passion? 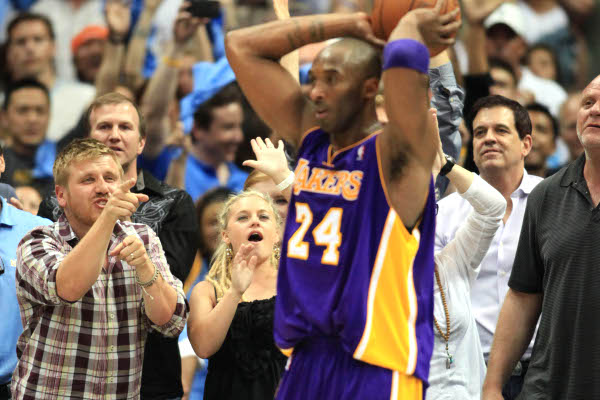 I love the NBA. I’d watch any team play any other team at any arena. Even in games between lottery teams, the NBA is home to Olympic-caliber professionals and their eye-popping acts of athleticism. But as much as the game on the court can wow and excite, the atmosphere of the NBA game leaves something to be desired. Aside from the occasional unique NBA tradition (Thunder fans stand until the first point is scored, and, along with the Hornets, they feature a pre-game prayer), most NBA games feature similar music (usually Rap/R&B and Top 40), similar cheers (“Let’s Go _____”), and similar chants (“De-Fense!”).

Compare this to college where many fans not only stand throughout the game but jump up and down for many minutes at a time. In college, there are personalized chants directed at both home and away teams’ players. College fans are not reactive or merely passive; they are active participants who stoke their team’s passion with a burning fire of their own. 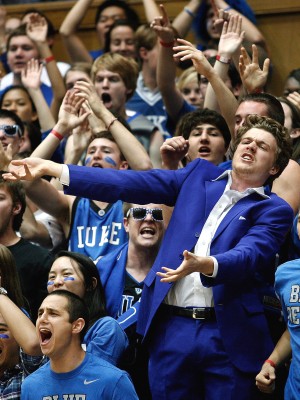 At Duke, for example, there are a host of in-game traditions that make attending games an interactive and social experience. Prior to tip-off, the students set the tone for the game with something resembling a collective drumroll. When an opponent misses a dunk, the crowd immediately erupts with a “YOU CAN’T DUNK!!” chant. When an opponent fouls out, the crowd yells “ohhhh” increasingly loudly until that player takes his spot on the bench, whereupon the Cameron Crazies shout “SEE YA!” in unison. All airballs are met with chants, and turnovers by the opponent are met with jeers and goofy gesticulations. When the game is in hand, an inevitable “DRIVE HOME SAFELY!” chant will organically mount.

Many of these examples can be detected while watching at home on TV (if you know what to look/listen for). This interactive participation enriches the fan experience, ignites the team’s players, and makes life tougher on the opposition. If even some of this passion could be injected into the NBA game, the great NBA game could become that much greater.

Even if we agree that the atmosphere of the average NBA game needs an upgrade, achieving this is no easy task, as there are important, inherent differences between college and NBA basketball fans. College has rowdy, energetic college students with time on their hands and school pride in their hearts. NBA fans are prideful as well, but the passion level is often diluted by comparison.

As was the case at my alma mater, college students often get some of the best seats in the house, and they get them for free. They wait in lines (or tents) for hours (or days), sometimes drinking to stay warm (only those over 21, of course), just for a chance to let out all of their pent up energy in a hot and stuffy gym and while on national television. At NBA games, however, the best and closest seats are often reserved for the most well-to-do fans, who are often older and usually not quite the most outwardly demonstrative.

So my proposition for some brave, first-moving, outside-the-box NBA owner is this: dedicate a small section of pretty decent seats at your arena to fans who you know will bring the passion and the crazy every night, and glorify these hardcore fans as an example to the rest. The Los Angeles Clippers unofficially have Clipper Darrell, a rogue season-ticket holder and cheerleader, who takes it upon himself to pump up the pride in the Staples Center lower bowl. However, he’s just one man, and he’s seen more as a novelty or unofficial mascot than the leader of a group of organized fans rallying in sustained unity.

What if the area (or part of the area) behind one or both baskets were devoted to the home team’s most die-hard fans? These seats are close enough to make an impact on the atmosphere (think of the thundersticks that are handed out there), but they are not nearly the most financially costly seats (due to the obstruction of the basket). All fans sitting in this zone would be required to wear either a costume and/or a certain number of articles of team apparel, and they would be prominently featured on the Jumbotron. They would be encouraged to get to the game a designated amount of time before tip-off, at which time the team’s cheerleaders would provide fans with some suggested cheer instructions.

All fans arriving in time to be prepped would receive a free giveaway, and the most spirited fans during the first half (as identified by the team’s cheerleaders or spirit team) could be voted on by the fans at halftime. The most spirited fan of all could win great seats to a subsequent game, where he/she would infect a new section with his or her team spirit, effectively serving as a “Clipper Darrell” for that section, evangelizing his/her passion for the team.

Owners who want to win championships should strive for the greatest home-court advantage possible. A dedicated, loud, close-to-the-court section of fans whose passion and cheers could reverberate to other sections (and perhaps to television viewers) could make life uncomfortable for opponents. The passion, participation, and pride of these fans could make fans watching at home want to experience that excitement in person, thus driving fan attendance. Getting in the heads of the opposition would enhance home-court advantage for the home team and would give fans a greater stake in their team’s success. The fan experience would be enriched as team-specific traditions, fan friendships, and great memories would be forged. 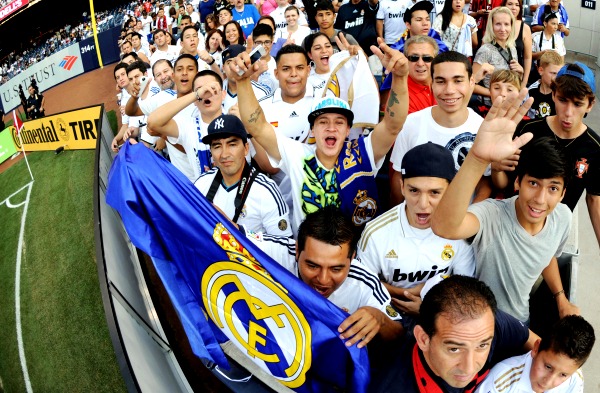 European soccer fans are known to spontaneously burst into their team’s anthem. Powerful chants of “Ole” can be heard echoing through stadiums. Rugby fans show up to tournaments in absolutely ridiculous costumes and have a ball. Even in America, the champion L.A. Galaxy of the MLS have special clubs dedicated to their most ardent supporters. L.A.’s “Riot Squad” has a sole mission: “to make the atmosphere at L.A. Galaxy games more festive and intense.”

To this end, chant sheets are available online, and the team provides a point of contact for more information on joining this elite squadron of fan. Teams’ business operations’ departments are collecting data, using CRM, price discriminating, and segmenting fanbases better than ever. Having interviewed an Eastern Conference business operations executive, the idea of having a passionate uber-fan group is absolutely aligned with what the organization seeks to pursue: customer/fan unity and passion.

Commissioner David Stern has done a great job of scrubbing the NBA game of drugs, violence, and smoothing its rugged edges, making the NBA and its superstars more attractive to corporate sponsors in the process. However, in becoming more sanitized, fans’ feelings of uniting behind a common cause and against a common enemy (e.g. Bill Laimbeer roughing up one of your star players) have been lost.

It is a cop out for the NBA and its teams to say that the NBA’s fanbase is just too structurally different from that of a college crowd to even bother trying to capture some of the same spirit that is felt when, for example, the Kansas crowd does the “Rock, Chalk, Jayhawk.” The Kansas crowd, remember, is also made up of well-off alums who return to their school as adults and let their school spirit be felt.

Some college basketball fans complain that NBA players don’t hustle as hard as their college counterparts. I don’t have statistical evidence to make a conclusion as to the truth of such a statement, but I can say that NBA fans certainly don’t bring it with the same intensity as their college counterparts. When NBA fans do get loud, creative, and united behind their teams, perhaps they’ll see their favorite players take their games to a new level. 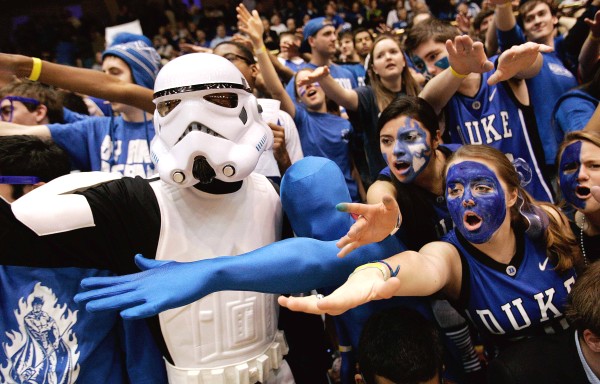 The Cameron Crazies are Duke’s sixth man. NBA fans can be their favorite teams’ sixth men and women as well, and teams (now loaded with data on their fanbase) are in the best position to incentivize the revolution. Even a most passionate fan like Clipper Darrell has been unable to really move his team’s fanbase into sustained, cohesive, and unified action.

A forward-thinking owner, maybe Mark Cuban or the NBA’s new ownership groups in Detroit, Golden State, Memphis, and Philadelphia, should experiment with sectioning off an area for fans who want to take their fandom to the next level in clean, classy, fun, creative, and inspired ways. Perhaps the NBA’s Commissioner-in-wait, Deputy Commissioner Adam Silver, a former Cameron Crazy himself, can help lead the charge.

The NBA has continued to steadily grow as a business. It’s a great product that I cherish as part of my life. But it can always be better. One important way to keep the NBA growing is to invite greater fan passion and enthusiasm, thus creating a better live atmosphere during NBA games.