No issues between Love and Rubio

No issues between Love and Rubio 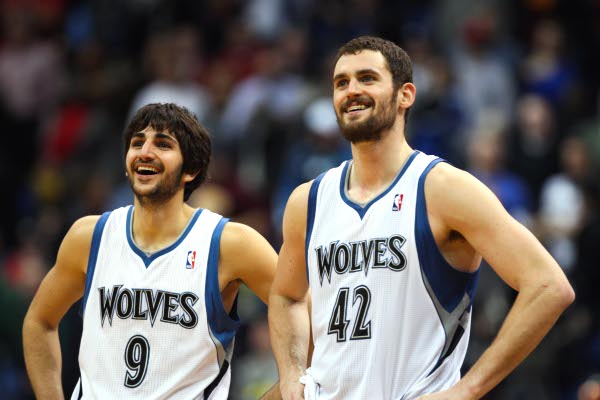 The Ricky Rubio–Kevin Love honeymoon continues. The Spanish guard said he has a great relationship with the All-Star forward during a conference call Tuesday in which he was asked about Love's comments to Yahoo! Sports last week.
"Kevin said he loved me and that's huge coming from the star of the team," Rubio said. "From Day One and even before, he's been showing me a lot of affection. Now that we have spent a lot of time together dealing with injuries and talking about games, I've developed a very good relationship with him. We talked (about the article) and he told he indeed said some of the things that appeared there, but there were others that had been misinterpreted and that he liked me very much. It's an honor for me coming from him."
With just two games under his belt in his return from a devastating knee injury, the Timberwolves are keeping Rubio from playing in consecutive nights. There's no telling yet when that will change.
"I don't know when I will be able to play back-to-backs," Rubio said. "It depends on how everything goes, we'll go game by game. It's not something we're planning in advance. Based on how I feel, that's how we will make decisions. There's no plan. It all depends on how the knee feels."
The Wolves guard, who missed the Olympics last summer due to the injury, expressed desire to return to the Spanish National Team this offseason to defend the European Championship the squad conquered in 2009 and 2011.
"I would like to play at the Eurobasket as long as I'm healthy, Rubio said. "I just came off a very tough injury and have to get in shape. If I'm feeling good from a physical standpoint, I'm available for the National Team as always.
"I don't think there will be any problem with the Wolves. There's a lot of international players on this team and I'm sure many would like to join their National Teams. If I prove the knee is 100 percent healthy, there will be no problem. We'll talk about it when the time comes."