David Falk: "The players need to come together and realize it's time for a change"

David Falk: "The players need to come together and realize it's time for a change" 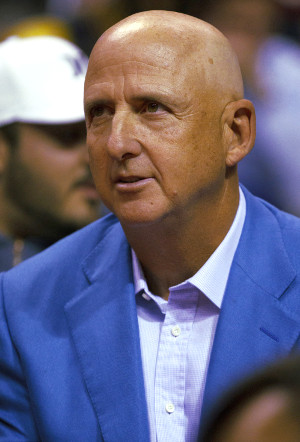 How do you feel about the situation at the NBPA?

David Falk: I've always said that the union has to be very strong. When you're negotiating the terms under which the players are going to share the revenues, I think it's important to have a strong union to understand how to protect the players' rights. And now that we have a 10-year agreement, I think the most important thing is for the players collectively with the league to sit down and be partners in this business now. They have to map out a joint strategy to grow the business. The only way the players are going to make more money down the road is for the league to prosper, so they are essentially partners. That's the way it's always always been, I just don't think Billy [Hunter] ever educated the players, explained to them that the best way to go is to grow the business together with the league. I hope that what's happened is a wake-up call for the players as a group that they need to get more involved. They can't leave to a handful of players to do all the work. There's a lot of work to be done.

What has been your reaction to the findings of the NBPA inquiry and what was the reaction of your players?

DF: I think they're angry. I think in general the players were angry by the findings. They were shocked that so much would happen. At the end of the day, if we want to be realistic about it… You've got to say that Billy Hunter gave himself a contract that guaranteed him payment while the players were all locked out. That's the only thing you really need to know. It's so unthinkable that somebody would do that. In 1998 and in 2011 the players are going to lose approximately $1.25 billion in salary because they couldn't reach an agreement with the league and then you turn around and say you still want to get paid because you're working very hard? To me, that's indefensible. All you need to know is that one fact and you can already conclude that there needs to be a change in leadership. If you didn't know anything else, that one fact is so damning that it requires the players to make a change.

Don't you think the players kind of knew about the little things – the nepotism and such?

DF: I think they were surprised. I've tried to keep my players as educated as I can, but I don't go to the meetings. The union doesn't allow us to go. It doesn't have a strong relationship with the agents. They look at the agents as adversaries, which is a mistake. We're all in this thing together. I think my clients were surprised at the level ot things. It's a wake-up call now and everyone's got to wake up and say what are we going to do about this.

Do you think there's any way Billy Hunter survives the season as union executive director?

What now? What are the next steps?

DF: Before talking about this person or that person, the first thing the players need to do is figure out, in this environment, what is that they need to hire. You've got a very, very long deal with the League, so the first thing to do is figure out what is the skillset of the person that they need to hire to do this job. That's Step 1. Everything else comes after that. I think it's a little different of a skillset than the skillset that was required when Billy was hired because I don't think they'll be doing a lot of collective bargaining. The person they hire needs to be able to sit down with the next commissioner, Adam Silver, and figure out a way to get the revenues in basketball to go from where they are now – from $5 billion roughly to $10 billion. For the players to make more money, we're going to have to figure out a way to significantly grow the revenues. You look at a sport like football, which is so much bigger than basketball in terms of revenues… We need to find a way to grow our sport significantly. That's the next challenge for the union.

There have been names thrown around already. There's been a report that Donald Fehr's name has been pushed by some NBA agents as a replacement for Hunter. Are you among those agents supporting Fehr?

DF: No, no. These guys are bashing each others' heads in the recruiting, then trying to say everybody's on the same page. I don't think there are too many on the same page. I think they need to slow it down and figure out who they need to hire before they start putting names out there. It's time for a whole fresh approach to figure out what is it that we need to make this union better, stronger. For example: Why is that the basketball players have ceilings on their salaries but they don't have that on football and baseball? Why? The answer is that the union is very weak and allowed that to happen. That's a mistake. The players need to look at the thing a lot more closely and try to understand what it is that they need to go forward before people start arbitrarily throwing names around. I think they need to take their time.

Do you think NBA players are more sophisticated now than in the past when it comes to making decisions like this, like choosing the new union executive director?