Spurs faves in the West

Spurs faves in the West 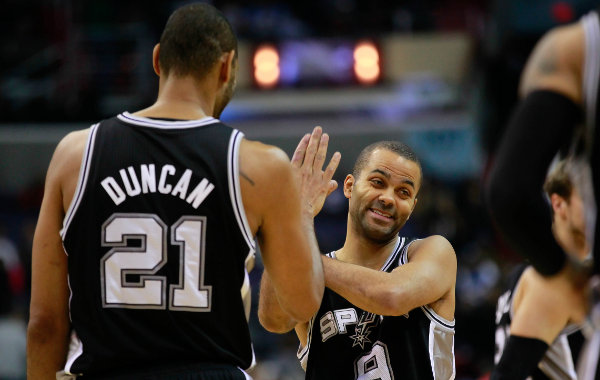 The San Antonio Spurs have compiled an absurd regular season record over the last two seasons of 111-37. Last year's lockout-shortened season saw San Antonio win a mind-boggling 31 out of 33 games during one stretch and 20 straight including playoffs… and then BAM! The Oklahoma City Thunder advanced to warp speed and the Spurs looked like they had concrete poured in their shoes. Their meltdown was surprising to watch given how downright invincible they looked before.

One of the things that make the Spurs great is their ability to shed disappointment and regain focus to chase a championship again. They have the best record in the NBA right now even though they've had to deal with two successive years of heartbreak.
Age has no doubt played a part in the playoff metldowns. So can they make a championship run now that Tim Duncan, Manu Ginobili and Tony Parker are 36, 35 and 30, respectively?
(In my estimation, Parker is the most underrated point guard in the history of the game. All he does is compete and win without much fanfare. He undoubtedly will be a first-ballot Hall of Fame player when he is done. He would be MVP this season if LeBron James was not around).
I truly believe the Spurs have figured it out. Although they will have to face much improved teams come playoff time, I think they are primed and ready to explode.
This is the deepest Spur team. They have veterans like Boris Diaw and Stephen Jackson that can further enhance the production of a plethora of three -point shooters that come in waves.
Kawhi Leonard, Danny Green, Tiago Splitter, Gary Neal, Patrick Mills, Nando de Colo and Matt Bonner have all made a tremendous impact this season – especially when Gregg Popovich decides to rest one of the members of the Big Three.
This ploy of resting players has drawn the ire of outgoing commissioner David Stern and San Antonio has paid a price, but it's obvious they are hell-bent on winning a championship no matter what heat they get.
The Spurs have always been a defensive machine, but now their firepower allows them to compete in up-tempo games. This year they will enter the playoffs ready to be the favorite to face the Miami Heat.
Duncan and Ginobili seem to be well-rested and that will pay major dividends because they both are capable of dominating games from time to time, thus relieving Parker of having to put up monster numbers.
I visualize the Western Conference as a four-horse race (Spurs, Thunder, Clippers and Grizzlies).
The sad part for San Antonio is that the Los Angeles Lakers could be looming as a first-round opponent and that should bring a high level of anxiety to an organization that is wondering if it's snake bitten.
But Spurs nation should not worry because San Antonio is not coming to a playoff confrontation with a pea shooter… They have horses and so far the smart money is leaning toward the Spurs.