All eyes on Rose

All eyes on Rose 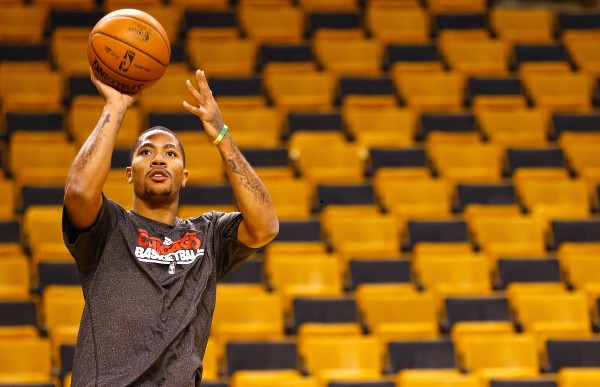 The loudest buzz in Chicago concerns the current and future status of Derrick Rose. Will he or won’t he play this season? Should he, or shouldn’t he? If he does, how good will he be? Will his presumed presence make the Bulls a legitimate threat to thwart Miami’s dominance of the Eastern Conference?

Let’s explore some of these issues.

Chicago’s brain trust desperately wants Rose to play ASAP for several reasons: Nearly 10 months after the surgery, the team’s physicians have given him the all-clear. For several weeks, Rose has already earnestly participated during practices in drills and scrimmages. If he plays even a few games this season, Rose won’t have to spend the summer worrying about his ability to regain his superstar standing.

Also, depending on what transpires from now until April 16, Chicago’s opponent in the first round of the playoffs will most likely be Brooklyn, New York, or Indiana. Without a healthy Rose, the Bulls could conceivably beat any of these teams, and then play another of them in the second round. However, each series would be extremely hard-fought and, with their current limited offense, the Bulls would have a very small margin of error. With a perfectly restored Rose, the Bulls would certainly be favored to advance into the conference finals against Miami.

Aha! And the further the Bulls advance in the postseason tournament, the more money the franchise will accrue. It says here that this just might be the primary reason why Chicago’s bean counters are pushing Rose to make a quick return.

On the flip side of the coin, there are many convincing reasons why Rose is reluctant to return to action. The radical surgery involved in an ACL reconstruction usually requires at least 12 months for a full recovery – trying to come back two months short of this prognosis, despite what the doctors on Chicago’s payroll might say, does entail a certain amount of risk. This is especially so for Rose since, as a right-handed shooter, his power leg is his left leg – the site of his surgically repaired joint.

Also, no matter how hard Rose has competed during intra-squad scrimmages, it is axiomatic that for such in-season competitions the players have to save their best chops for the games that count and only play at 75 percent of their capabilities. So Rose has yet to face the kind of all-out effort that’s the norm when games are witnessed by paying customers.

To be prepared to reach that level, Rose has to be physically and psychologically ready. Only he knows which of his normal spins, twists, and warp-speed changes of direction induce an overall feeling of uncertainty and vulnerability. And only he knows when he has regained total confidence in all of his shake-and-bake moves.

One of Rose’s most transcendent gifts has always been his quickness. Plenty of NBA players can match the quickness of Rose’s first step, but it’s his second step that leaves competitors (and defenders) in his dust. Without this ultimate weapon, Rose’s game would be noticeably impaired. Instead of zipping his way to open or only marginally contested shots in the paint, the block- and foul-hungry bigs will be that much closer to him. And there has never been an NBA player who has totally regained his original speed and/or quickness after undergoing an ACL reconstruction.

So even when he does suit up again, it’s to be expected that Rose will be forced to pull in some parts of his game plan, and slightly reduce his sphere of influence. That said, he should also be expected to work on other aspects of his game – like long-range shooting, and pull-up jumpers going both ways.

Given that Rose does make a complete comeback, his confidence restored, and his body acclimated to the normal, ultra-physical NBA contact, it would still be a long shot for the Bulls to usurp the Heat. That’s because while Rose’s offense might be nearly restored, the sudden, unexpected, and instinctive moves he’d have to make on defense would make him an easy target to be abused by, say, Dwyane Wade, Ray Allen, or even Mario Chalmers.

In addition, while the length and athleticism of Luol Deng’s defense sometimes gives LeBron James a modicum of trouble, it’s well-known around the league that Carlos Boozer usually chokes in tight situations versus elite teams.

In any case, it says here that Rose would be better off sitting out the rest of the season and continuing his physical, psychological and emotional rehab throughout the summer. After all, what’s the rush? Come July 1, none of Chicago’s core players will be free agents. Moreover, who knows what trades and/or free agents signings might be transacted to strengthen the roster during the offseason.

Even so, when all the pros and cons have been considered, the Bulls bigwigs are well aware of one all-encompassing principle: In the NBA, the future is now!