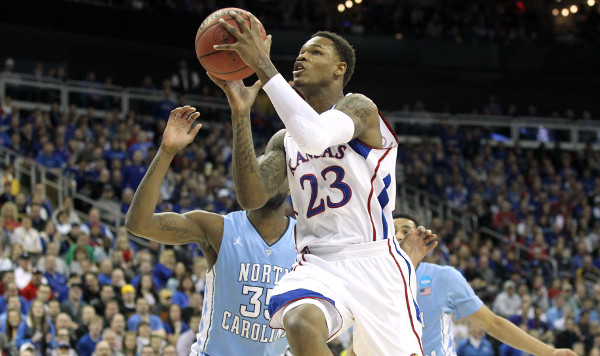 He has struggled mightily in the NCAA Tournament, has had his share of uneven performances this year, but don’t expect Kansas freshman Ben McLemore to drop too far on the draft boards of NBA teams.

McLemore is the No. 1 player on HoopsHype’s draft board and he could be at the same place on several NBA teams' boards too.

In his first two NCAA Tournament games, the 6-foot-5 McLemore went 2 for 14 from the field and 0 for 8 from beyond the arc.

Yet despite his recent struggles and the reputation for lacking assertiveness, McLemore is still held in high regard.

A long-time NBA scout who requested anonymity talked about the positives of McLemore.

“He is a player with tools and is a great athlete,” the scout said. “He has athleticism at the position and is grading in the top percentile.”

Despite McLemore’s NCAA performance from beyond the arc, McLemore possesses a trait that is not in high supply in the NBA, the ability to shoot from deep range.

“He has a pure looking stroke,” the scout said. “I think Ben McLemore is a prototypical NBA two-guard.”

The scout said that when judging McLemore, one has to truly know his background. He grew up in an impoverished family. His family’s financial plight virtually forces the 20-year-old McLemore to leave Kansas after this season.

“Everybody knows he has been able to overcome an upbringing where his family was extremely poor and you don’t know where his nutrition level is now,” the scout said. “There are a lot of things that will improve when he gets with an NBA team and playing basketball is his only thing to worry about.” 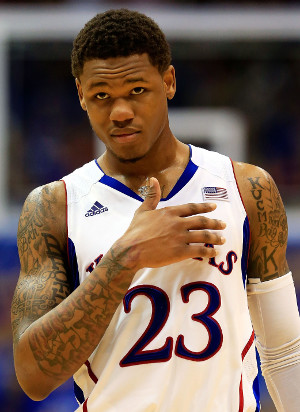 So the scout is willing to give McLemore the benefit of the doubt. He points out that McLemore didn’t play last year after not qualifying academically. And now he is competing on a veteran team, trying to blend in.

“He has so much talent and is a first-year player on a senior laden team,” the scout said. “I give him a pass for not always being assertive.”

The scout admits that one can’t overlook the lack of assertiveness and says it will be important for any team thinking of drafting McLemore to get to know him in the interview process.

Kansas coach Bill Self knows the positives and negatives as well as anybody when concerning McLemore.

“He’s so athletic and can do things to open up things for others,” Self said. “What I like most is he can shoot the ball and is very athletic.”

And then he brought up the assertiveness issue.

“Of course he can become more aggressive when things are going his way, figure out a way to get to the free throw line,” Self said.

McLemore draws raves for his personality and his strong will, having overcome so many difficulties while growing up in an impoverished family.

He is polite and highly respectful of his teammates, seeming to want to fit in, rather than steal the spotlight.

When it’s pointed out that one of the knocks against him is that he is too unselfish, McLemore matter-of-factly addresses the issue, one that he has talked about constantly.

“That is my style of play, I am not a selfish person,” he said in an interview with HoopsHype during the NCAA Tournament. “I am a humble person who likes to get my teammates involved and that is how I have been playing since high school.”

And he doesn’t apologize for this mindset, especially on this experienced Kansas team.

“I am playing with four seniors and it’s great to play with those guys and learn from them,” he said. “I listen to them and go out and try to play my game.”

He said that sitting out last season was another situation that has made him a stronger person. Showing his resourcefulness, he attempted to make the best of a difficult situation.

“It was tough but I definitely learned from my teammates and it helped me as a man and my game on the court,” he said.

McLemore, who was averaging 15.8 points per game following Kansas NCAA win over North Carolina, says he has heard all the projections of his expected high draft status and says in a convincing manner that it’s not something he is dwelling on now.

“I try not to think about it too much and just to focus on what I have to do for me team,” he said.

Yet he’s only human and all the talk about being a high draft pick is obviously gratifying.

“It’s great to hear those things but right now I am trying to play my game for the University of Kansas and play for the team,” he said.

His team-first attitude is something that no doubt will endear McLemore to NBA teams. It’s a lot easier attempting to get a player to be more selfish than the other way around.

McLemore says he doesn’t get to watch the NBA a lot, but like so many others, is captivated by the Miami Heat.

“My favorite team is the Heat,” he said. “I try to catch them as much as I can because they are a great, talented team.”

He loves the Heat’s team-first style, led by LeBron James.

So while this has been an up and down season and certainly a disappointing beginning to the NCAA Tournament, McLemore’s combination of athletic ability, his outside shooting prowess and his willingness to play team basketball, will ensure he won’t have to wait long to hear his name on draft night, assuming as everybody does that he will leave Kansas after this season.