Salah Mejri: A rare case of an Arab on the NBA radar

Salah Mejri: A rare case of an Arab on the NBA radar 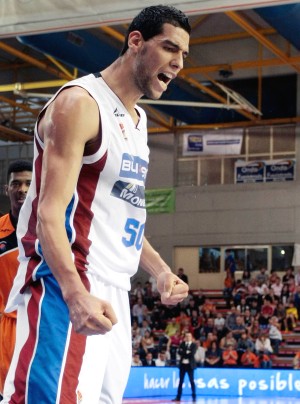 Completely out of the NBA radar just three seasons ago, 26-year-old Tunisian center Salah Mejri has emerged as a late-blooming sensation in the Spanish League with club Obradoiro.

Leading the competition in blocks while averaging just 20 minutes per game, Mejri is drawing attention from top Euroleague clubs such as Real Madrid and some NBA squads too. An Eastern Conference executive already considers him "a legit backup center in the NBA."

His eye-opening performance in the ACB League comes on the heels of his impressive play at the Olympics with Tunisia, the first Arab squad to qualify for the Games since 1988. Even though the team failed to win a single game in London, Mejri made a name for himself topping the Olympic tournament in blocked shots (3.4 per contest) and coming second in rebounds just behind China's Yi Jianlian.

A run-and-jump 7-foot-2 center in the Tyson Chandler mold, Mejri has exploded late for a reason: He only started playing basketball at age 18 and, more focused on books than sports at the time, only took it seriously two years later.

This season with Obradoiro is his first one in a top-notch league. Mejri spent the previous two in Belgium with Antwerp Giants, where he signed when he was already 24.

"Everything has gone really, really, really quick," Mejri said in an interview with HoopsHype. "From not playing, to playing very little with my team in Tunisia, then becoming the best player in the country, then Belgium, being the MVP of the African Championship… So so quick. It has all happened basically in five years because the first two I wasn't really that much into basketball."

The North African center turns 27 in June, but looks far from a finished product. Although a very fluid athlete, there's still some work to be done body-wise.

"He has to get stronger," an NBA executive told HoopsHype. "He has good athleticism. I like the way he runs and jumps. But he needs more strength. And he needs a couple of moves in the low post, although he has good shooting touch for his size."

Low-post game has actually been an area of emphasis during his time in the Spanish League with Obradoiro, according to Jose Luis Mateo, the club's general manager.

"Back in the day, he didn't get many touches on the low post and that's changing lately," Mateo said. "He has a strong work ethic and has made strides since the beginning of the season. He puts in the work. Whenever there's an optional practice, he's there. He hasn't taken one off yet."

Mejri already had a brief NBA experience last year. He worked out with several teams in the States and played at the Orlando Summer League with the Utah Jazz. Although his numbers there were nothing to call home about (2.6 ppg in 11 mpg), Mejri says he received strong reviews from NBA types and came close to signing a contract.

"Everybody was happy with the way I was working. The New York Knicks' general manager said they really liked me. Everybody was saying, 'Wow, you have a lot of potential physically, you can run, you can jump, you're a big guy and you can really go far with this talent' and blah blah blah. Then I didn't have all the opportunity at the summer league because I had to choose between Las Vegas and the Olympic Games and I chose the Olympics."

The English-fluent Mejri, who is a college graduate in engineering, will play again this summer at the African Championship with Tunisia, the country where the Arab Spring began just two and a half years ago, fueling uprisings against authoritarian regimes all across the Middle East.

"It was difficult to watch the (Tunisian) revolution on TV from Belgium," he said. "Of course my family and friends were there, but also my country was on the line. I would pray all the time, going to Facebook and making calls to see what was happening. I think in the end it was a good thing because the reins have loosened, people is more free now. OK, the country is not stable now. Everybody wants to be the president, everybody wants to have power and the only thing we can do now is wait. Anyway we're in a better situation than Lybia, Egypt or Syria."

As is the case in most nations in the Maghreb and Middle East, basketball is not a big deal in Tunisia – at least till now. Even with all the international influx of talent in the league the last two decades, no Muslim Arab has played an NBA game since Egyptian-born Duke center Alaa Abdelnaby finished his career in the league in 1995.

NBA teams interested in Mejri will have to compete with Euro teams for his services, though. Agent Bouna Ndiaye told HoopsHype they will test the Spanish and European market first – with Real Madrid reportedly in the lead now – and will only look at NBA options second.

"I would be happy playing here with a Euroleague or Eurocup team too," Mejri said. "But the NBA… That would be a dream."