Dion Waiters: "I'm still not getting the respect I think I deserve"

Dion Waiters: "I'm still not getting the respect I think I deserve" 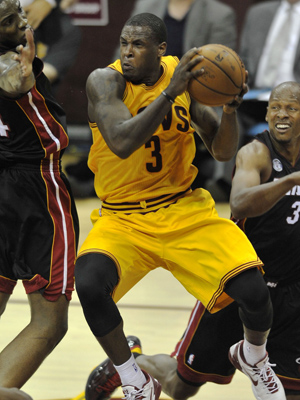 What was your reaction to Byron Scott being fired?

Dion Waiters: I did not know what's going on. Just to find out they let the coach go… It was a surprise, I was more surprised than anything.

So you were not expecting Scott to lose his job.

DW: I really didn't, but you know… I've been hearing a lot of things. I'm trying not to pay attention to certain things but you find out. You're surprised especially because it happened so early and so fast.

What did you learn from your coach your rookie season?

DW: Just to play hard every possession and not let minor things affect you. He taught me to never get too high, never get too low. I'm trying to stay in between.

How was the relationship between the coach and the players?

DW: Cool. He was a great guy, always willing to talk to anybody about anything. Especially off the court, talking about life. He was always open, always having conversations with players about different things. He treated everybody the same.

What type of coach does the team need?

DW: The one who gets the job done and is there for the players to focus on every aspect so they can get better and develop.

There's talk about a Mike Brown return? Any thoughts?

DW: I've been hearing a lot of things but I can't go by what I hear. I can't talk about it until it happens.

You played with Kyrie Irving at the point guard position. How was that? How was playing with him?

DW: It was great, I learned a lot from a player like that, who handles well any situation. We will continue to play together, improving and and learning from each other. I guess next season will be different.

What was the worst moment of the season for you?

DW: Getting injured for sure. I was never injured like that before in my career. That was the toughest moment, trying to come back, playing and getting back into rhythm.

Will you need surgery?

Are you expecting many changes on the team this offseason?

DW: I'm not sure. I can't really tell you how's it going to go or which direction they are going to move in. All I can do is try to improve and take my game to the next level.

What do you think the team needs?

What's the plan for the summer for you personally?

DW: I'm going to work like I have something to prove. I'm still not getting the respect I think I deserve. That's my motivation.

What's your ceiling in the NBA? Do you see yourself as a starter, All-Star, superstar?

DW: Superstar! That's my motto. I'm confident that if I keep working, they will see. I've proved everybody wrong this year and I will keep working hard.