Jrue Holiday: "I'd love Bynum to stay in Philly... if he's healthy"

Jrue Holiday: "I'd love Bynum to stay in Philly... if he's healthy" 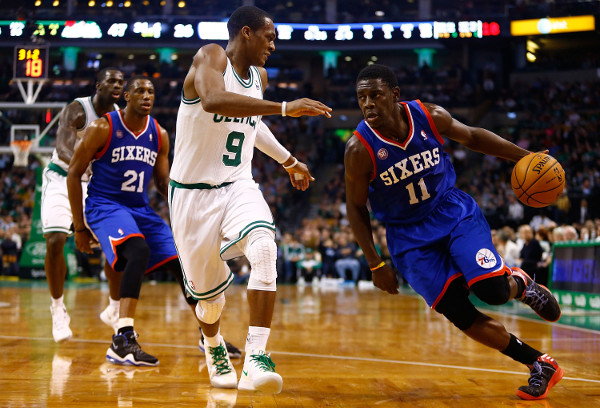 What can you tell us about your offseason plans?

Jrue Holiday: Well, I'm on a little vacation now and then I'll start to work out a little bit.

Sam Hinkie the new GM said you, Thaddeus Young and Evan Turner are all quite interesting. Do you think you and those two guys, with the help of new additions, can make the 76ers contenders soon?

JH: Yeah, I think we have a good base. Young guys who definitely play with a lot of heart, just really want to play and want to win. So I think we're going to do pretty well.

Sam Hinkie is on board and it is said he will bring a Moneyball approach next season. What do you think he will bring to the table?

JH: He will bring guys who only care about winning, no egos, good-character guys who really fit in and mesh together.

Your new contract kicks in next season and you could be the best paid player on the roster. You already are an All-Star. What are your next challenges as the leader of the team?

JH: I think that's it: Trying to grow as a leader, trying to become more like these point guards who kind of run the team, help the team win a lot more games.

What has been the key to your great improvement this season?

JH: A lot of hard work, a lot of faith, listening to my coaches, listening to the people around me, working on my jump shot, making good decisions on the court as well as being a leader. 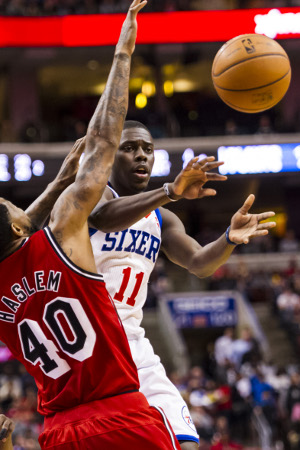 Two years ago you told me the Sixers needed a big man. I guess it's what you expected when the Sixers got Andrew Bynum, right?

What can you say about him as a teammate?

JH: He's an awesome teammate even though he didn't get the chance to play. He showed me a lot of perspective from the big men aspect of the game. I do think he's one of the best big men in the league and having him on the bench and in the locker room helped me to improve my game.

What can you say about his attitude towards the 76ers franchise?

JH: I think during the year when he was with us, he was there for us. He was there every day, he was rehabbing, working on his knee, came in on time… Every time I saw him he was working hard, it wasn't like he didn't want to play, he always wanted to play and you could see that.

So do you think he was respectful towards the franchise?

Do you want him to re-sign with the Sixers?

JH: I'd love him to… obviously, if he's healthy. If he's healthy I think he's the best big in the league, but like I said it's tricky because of the knee injuries.

Do you think that the Sixers, now with Hinkie as GM, want to keep Bynum?

JH: They actually haven't talked to me about that so I don't know. Again, it's a tricky situation because of his knees, his injuries. You can't really make the decision just yet.

Do you think he wants to stay in Philadelphia?

Doug Collins is gone. In which ways has he helped you to improve and become an All-Star?

JH: He really puts the emotion on the game. Some days, when you don't feel like playing he brings kind of the energy out of you and gives you the extra push to leave it all out on the court every single game. Off the court he taught me how to be more of a leader. Just for me having to know what he wants me to do on the court and make our team better made me better as a leader.

You have said you would like Michael Curry to become the new coach. Why?

JH: Michael Curry is a big coach. He really knows the game, I like him as a head coach and anywhere that he goes he will make a good head coach.

Was the All-Star maybe the best moment of your career?

JH: It was awesome. It was something not too many guys can experience as a player. It was my first time and being there, with so many guys that have been there five, six times, 16 times, it was really cool to see, I learned a lot: some little details that make them the best.

The 2009 draft has been a good one: you, Blake Griffin and James Harden are already All-Stars, other great young players like Stephen Curry, Ricky Rubio…

JH: We have a young, awesome class. We all wanted to come into the league and prove ourselves and I think we're doing pretty well.