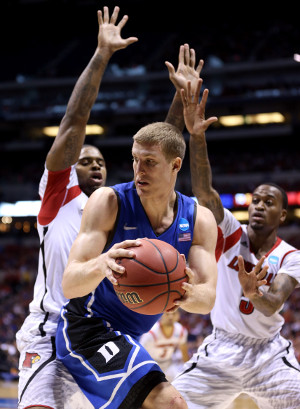 In which ways has staying in college another year helped you?

Mason Plumlee: It was the first year where I was really "The Guy" offensively. I was scoring and rebounding. It was the first time in four years where I was the first option on the floor. This extra year also shows, if you look at it statistically, that each season I've been in college I've improved. So I think that shows teams that I love basketball and I continue to get better each year… And that trend will continue in my career.

Were there ever second thoughts about the decision at any point?

MP: Yeah. I mean, it was a big decision for myself. I looked at my options very hard. With a big decision like that, I just followed my gut. I thought I would thrive in that situation and the coach really wanted to run things through me, so that was why I decided to come back.

There was one thing where you improved a lot: Free-throw shooting. Was it something that you worked a lot on or was it mostly a mental thing, something that clicked on your mind?

MP: I would say it was more of a mental thing because I worked a lot on it when I was shooting poorly, so it wasn't a matter of putting the time then or getting the right shot. I just became more comfortable at the free-throw line, I think I shot more free throws than previous years. Just getting comfortable out there.

Coach K and Duke: Better at developing guards or or big men like you?

MP: I just think they are good at developing players. A lot of people before I got there said they had trouble developing bigs. I would just say a couple of guys transferred out before they finished their careers. In the last two years Miles [Plumlee] was a first-round pick, I'm going to be a first-round pick. I think they did a good job at developing big men. To me, development is ultimately on the player. It's on the player to get better.

Has the Duke experience been everything you expected it to be?

MP: Even more than I ever expected. I won the title and met the president. I played in China, Dubai, Hawaii, the Bahamas, played in the Final Four, played in the Madison Square Garden… In four years, it was even better than I expected it to be.

You were at the draft combine recently. How were the interviews?

MP: The interviews went very well. It was a good change for me to get to know some of the decision-makers on the teams – because you know the coaches, you see them on TV. You don't always get to know the general managers and the presidents. As much as they get to know about us, we get to know them for the first time too.

Anybody in particular that caught your attention?

MP: I would say the most unique interview was with Dallas. It was run by a psychologist who had some out-there questions that had nothing to do with basketball. But it was interesting.

MP: Well, we were sitting in a hotel room and they asked me how many basketballs I thought could fill up the hotel room. I guessed 200 or something. I forgot what I said. There's no right or wrong answer [laughs].

MP: I think there's more pressure on the games. I think the workouts are good, they get to see you in person… If you get the chance to work out against other guys in your range, I think that's very important. But they watch film on us a lot, so they have a very good idea of who we are as players. Games are more important, but this is all I have right now, so I have to do well in workouts.

Do you feel there is one thing that sets you apart from the rest of the big men in this draft?

MP: I would just say that if you look at what I did this season, I averaged about 17 points on a team that played the toughest schedule in the country. We played everybody… We played Kentucky, we played Louisville twice… And I was the focal point of that team and I was able to succeed in doing that. I would say that I'm tested and I'm ready to help a team right now and years from now.

You've used the Skyhook in college. Do you plan on using it in the NBA?

MP: That's a shot that I've worked on, especially this year. It helped me in the tournament, for example against Michigan State. It's a hard shot to defend. I think it's a very effective shot and I think it will help me going forward.

I went to the draft sites and read about the weaknesses on your game. I wanted you to comment on those weaknesses. For example, they talked about how your post game and perimeter shooting needed improvement.

MP: Yeah, my perimeter shooting does need to improve. That is something that can be worked on. I wasn't asked to shoot jump shots in college. I think you see a lot of players come into the league and develop a very good jump shot with time.

Another weakness: "Lateral quickness is average at best."

MP: I don't know, I guess they are the experts. I feel I'm quick on my feet, but I don't know [laughs]. I would just say look at the draft combine, look at the lane agility area and the scores there.

Are you going to be nervous on draft night?

MP: Maybe a couple of guys already know where they are going or have a very good idea, but the rest of us don't know, I'm sure everybody is nervous. You don't know where are you going to play, who your teammates are going to be. You're are going to be nervous and excited at the same time

What would be a good draft night for you? 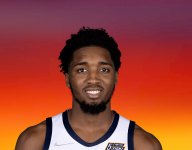 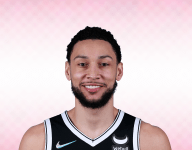