Why the Heat won

Why the Heat won 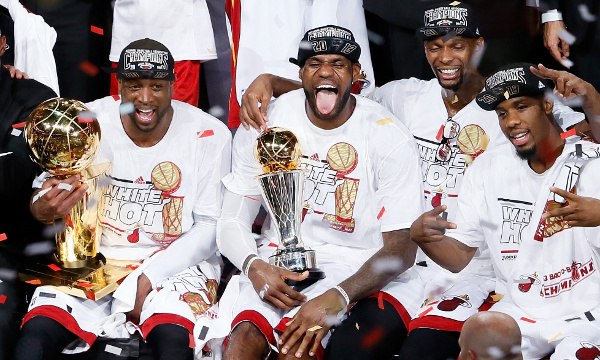 The lead story of Game 7 was Miami’s individual talent beating San Antonio’s disciplined teamwork. But there were also several back stories.

The Heat’s offense took full advantage of what the Spurs defense gave them, i.e., space enough for LeBron James and Dwyane Wade to take all the jumpers they could hoist. And in a reversal of what had been the main themes of several of the previous games, it was Miami who shot the lights out from the perimeter while San Antonio had success driving the ball to the rim.

The Spurs had no answer for Miami’s elbow pick/rolls. The result was a devastating combination of layups, short jumpers, and kick-outs to the Heat’s sharpshooters. Tim Duncan played remarkably well considering his advanced years, the minutes he’d played in Game 6, and the emotionally devastating residue of losing that game. However, as the game wound down, TD was increasingly slow off his feet – which was why he missed that critical gimme in the last minute. Don’t forget to credit Chris Andersen with banging and muscling Duncan and helping to make The Big Fundamental grow noticeably older by the minute.

Danny Green was virtually useless without his three-pointers falling.

In fact, Miami’s energetic team defense prevented San Antonio from ever generating any kind of rhythm on offense. If many (if not most) of the Heat’s shots were lightly defended, most of the visitor’s field goal attempts were attempted under extreme duress. 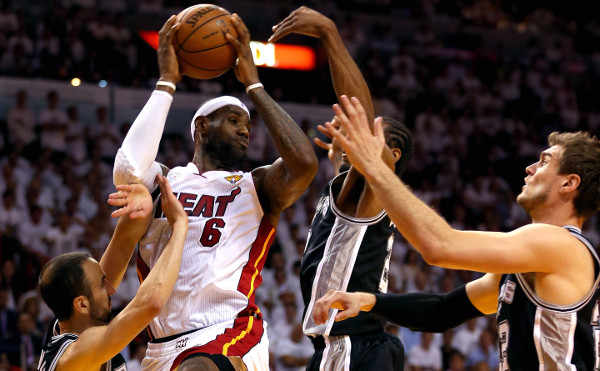 LeBron rectified what had once been a serious weakness in his offensive repertoire by hitting a host of critical jumpers from beyond the pale – thereby living up to his reputation as being the best hooper on the planet.

And on D-Wade’s several isos from the left wing, Miami’s second-banana converted virtually all of the same kind of jump shots that he had missed in the previous six games.

Moreover, if rebounding was once identified as another critical flaw in Miami’s game plan, they generated numerous extra shots by relentlessly assaulting their offensive glass.

Perhaps Shane Battier is no longer the defensive stopper he once was, yet he demonstrated that he’s still a deadly one-on-none three-point shooter. He was open so frequently because the Spurs defense sent too many helpers into the lane when LeBron, Wade, and even Mario Chalmers burst past the first line of San Antonio’s defenders.

Except for several attacks on the rim in early offense situations, Miami’s alert baseline rotations mostly prevented Tony Parker from racking up points on his habitual spinning layups.

Overall, Miami’s defense outplayed San Antonio’s offense. And, in another reversal of things past, the defending (and still) champions had better ball- and player-movement than the challengers.

The Spurs showed great heart in winning a few battles, but they lacked the juice to make the big clutch plays that are necessary to win a championship.

The Heat showed even more heart by doing best what they had done worst for most of the series and for most of the season. In still another about-face, Miami also demonstrated the kind of resilience and flexibility that have historically characterized all of Gregg Popovich’s ball clubs.

Once again, LeBron did what he had to do in leading his retinue to the golden ring.

The King is not dead. Long live the King.