Catching up with Alex Len

Catching up with Alex Len 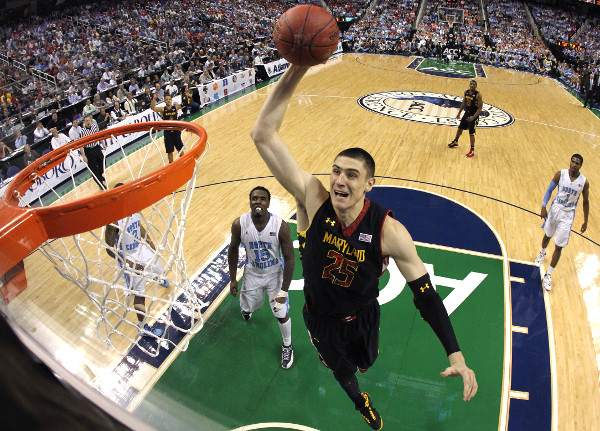 How was your life in Ukraine?

Alex Len: It was good. I played on my high school team and when I was 17 I played for my national team. We played in Lithuania the U-18 European Championship, and I played really well there. There were calls from colleges afterwards. A lot of scouts saw me play and they liked my game and told me to come to America. That's when I decided to go there and play in college basketball.

AL: It was challenging but me and my parents, my grandparents, we all thought it was a good decision for me, so we decided to move there. Yeah, it wasn't something that I had planned, but when I got the opportunity I thought about it, I liked it and I decided to do so, to come to America and play college basketball.

How were those first few weeks in the United States?

AL: It was hard when I came. I knew just a little bit of English, so it was hard at first. It was really challenging, but I worked hard, took a lot of English classes, stayed on top of my work. I would say that in six months I adjusted to the culture, the language…

What was the best part about the college experience for you?

You played hurt part of your final season at Maryland. How was playing with that pain?

Looking back to those games this season, do you have any regret about playing hurt? Are you angry at somebody at the team for not paying attetion to that pain?

AL: No, I don't have any regrets. Those years in college worked out well for me. I'm just looking forward to playing in the NBA.

How has been the experience the past few weeks – all these interviews with the NBA executives, going to the draft combine, etcetera?

AL: It has been a lot of fun. The last 2-3 weeks I've been traveling a lot and although I didn't work out because of the injury I've been able to do interviews with different teams. I met a lot of good people and kind of got a feel of the teams. Having gone throught that, when I get drafted the first year is going to be easier.

There were reports that you were very good in the interviews with the NBA people.

AL: I was just being myself. Talked about myself and answered to all of their questions. That's it: Just trying to be myself.

How do you feel about not being able to work out for the teams?

AL: Yeah, I was just feeling frustrated that I couldn't work out and I couldn't compete with the other guys. I'm just trying to be focused on improving from my injury, doing rehab… Just continue to work hard and get better.

You are now projected as a No. 1 pick in a lot of mock drafts, including HoopsHype's. Do you feel good about it?

AL: I don't really look at mock drafts. I just let my agent do his work, I'm just trying to be focused on my rehab process, working hard in the gym and enjoying the process.

Do you want to be the top pick or maybe there's too much pressure that goes with being the No.1 pick?

AL: I mean, I would love to be the No.1 pick, but I'm not really focused on that. I'm just going to play for the team that drafts me at the end of the day. I'm going to work hard and just help the team win and contribute.

Are you going to be nervous in New York the day of the draft?

Do you think you're going to be an impact player in your rookie season?

AL: I can't say that right now because I don't know which team I'm going to, but I know I'm going to work hard, try to get playing time, contribute to the team and be the best player I can be.