Lance Stephenson: "I had to prove my point that I can play in this league"

Lance Stephenson: "I had to prove my point that I can play in this league" 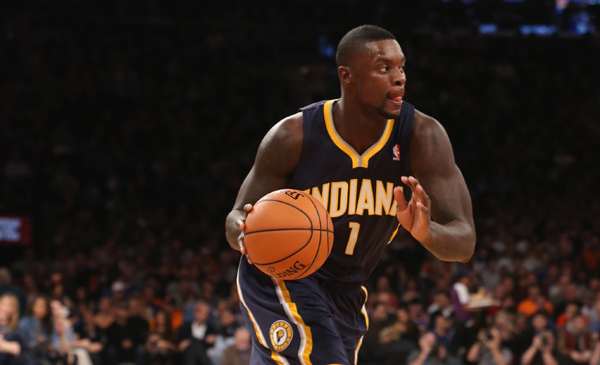 How were the days following the defeat to Miami?
LS: I was upset. We all worked as hard as possible so that we could win Game 7.
Specifically, what went wrong in Game 7?
LS: I think we played at the best of our abilities, but the Heat were a better team
Did you watch the Finals afterwards?
LS: Yes, I did.
Do you think Miami was a team you could really beat, considering San Antonio was also close?
LS: I think we can beat any of these teams as long as we play together and have everyone help, so yes.
Most people would say the Pacers' season was a succes. Do you agree?
LS: Pacers' season went great. Everybody appreciated that we played together as a unit. We got as far as possible. We got to the Conference Finals. That's something we didn't get in a while. We're happy we got there.  I wish we got the guts to win, but the Heat were a better team.
Was it a success from an individual standpoint?
LS: I think I did great. I played the role that the coach wanted me to play. I played smart. I love the game as much as possible, so it made me a better player
What made you improve this season?
LS: To watch other people. Watching and learning the game. To train with the coaches, watching the films. Learning as much as possible so I can feel comfortable on the floor.
After the first two seasons, did you feel at any point people were giving up on you?
LS: I feel like it humbled me that I had to prove my point that I can play in this league. That made me a better player, a smart player so I can learn as much as possible.
Did you doubt yourself?
LS: No. I always knew how to play. I needed the oportunity to show everybody I can do it
Brian Shaw left Indiana to coach the Nuggets. How was your relationship with him?
LS: I think he's a great coach because he made me a better player. He made me play to the best of my abilities. He made me play hard, he showed me how to play the game with his experience of the basketball game.
Do you think he was the person in the Pacers' organization that helped you the most?
LS: Yeah, he was the biggest influence on me this whole season. He was a smart coach. He told me how to play.
You've been with And1 since you become a pro. How's your relationship with them?
LS: I have a great relationship. I love the experience. I love the things they're bringing to the table. This is the right sneaker for me and I feel comfortable in them
Does it make you feel special being one of the best known faces of the company, instead of being just another guy in a giant brand?
LS: It makes me feel important. The fact that they believed in my talents when they signed me as the only player on this shoes. I'm happy.