Rose shooting for first game of the season

Rose shooting for first game of the season

At an adidas event this morning in Madrid (Spain), Bulls guard Derrick Rose said he fully expects to return to the court next October.

"I should be able to play in the first game," Rose said. "I know I'm anxious right now to play. My health is everything right now, it's 100 percent. But right now, the first game… I definitely will be playing it."

"We will play in Rio de Janeiro in Brazil [October 12], the first NBA game ever in Rio, so that's going to be a big game not only for the Bulls but for the NBA. Just some minutes out there, see how it feels just to be back on the court and enjoy the experience."

Rose, who last played a game on April 28 2012 after suffering a torn ACL in his left knee and had surgery on May 12, said he has no idea how he's going to feel when he hits the court again after so many months away.
"I would say emotional but I'm not an emotional guy like that," Rose said. "I don't know how I'm going to react actually when I step on the court or before the game. I know everybody is going to be watching… I'm just trying to prepare for it, go out there and see how it goes. I have a lot of confidence in myself."
While the mental aspect was one of the things that kept him away last season, that's no longer an issue now, according to the 2011 MVP.

"(Mentally) I'm just strong as I've been," Rose said. "I had the time to think about what's important in my life, getting better on the court, watching a lot of film with Thibs, asking him questions, talking to him about two times a week… So he's been kind of a professor to me."

The Bulls All-Star guard has been traveling across Europe this month in a promotional tour with adidas. Madrid was the seventh and final stop. He's been in the city with agent BJ Armstrong, his wife and kid, among others.

Rose looked fit and confident about Chicago's chances this year, even with the lack of activity in free agency so far this offseason.

"This next season is huge for us," Rose said. "We're definitely a contender for the title this year. I've been talking to my guys, trying to be more vocal as a leader, just texting them, calling them, just trying to communicate with them to let them know that I will be there next year."

The 6-foot-3 Rose also made clear he's not upset with the front office or the talent that surrounds him in Chicago.
"The team did the best they could bringing players that play hard and people fit the system. Last year we made it to the second round of the playoffs, so this year the goal is to get further." 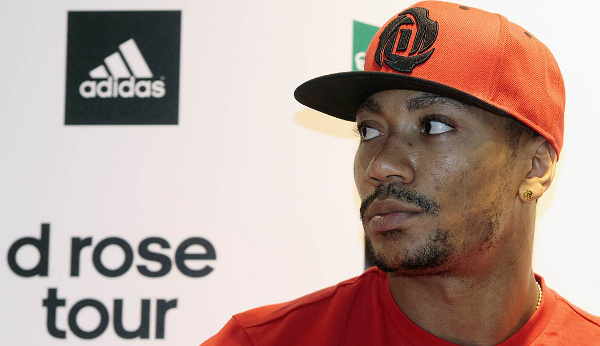