Shawn Respert: "Adelman would be good coaching any sport"

Shawn Respert: "Adelman would be good coaching any sport" 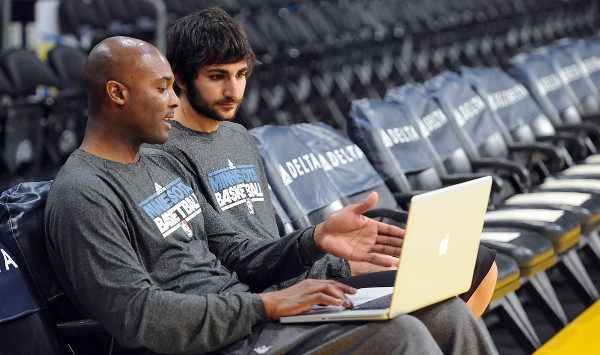 You have worked some front office jobs since you retired, but you're a coach in Minnesota now. Was that something that you were pursuing or was it something that just happened?

Shawn Respert: It was something that just happened. When I finished playing I sat for about one year and a half. I didn't do anything, I was just enjoying some time off away from basketball. And then I focused on what I was going to do with the rest of my career. And I had an opportunity to speak with Joe Dumars from the Detroit Pistons. He gave me some advice about getting back into basketball. My first idea was about scouting, working my way up in front office, maybe becoming a general manager like (Dumars) was. But once I got into my first job back into basketball, which was being in charge of player development at Rice university at the college level. I had a lot of fun developing players and coaching. It really felt good to be a positive influence on athletes and see the changes players were experiencing.

How's working with Rick Adelman and what have you learned from him?

SR: The one thing that I really felt was how great of a coach he is, first. There's a lot of people who are good at coaching on one thing, but he's a good coach. Like it doesn't matter what sport he would coach, he would be good at it – like basketball, tennis, soccer… Or coaching in America, or Canada or South America or Europe, he is a good coach. That's an outstanding trade. He just decided to choose basketball. He's just an outstanding coach and I learned a great deal on how to get the most out of your players – how to empower your players and make them feel like they are a big piece to the puzzle. And that is what great coaches do, no matter what league or sport they are coaching.

It seems like for the most part players do better with him than with most other coaches. Would you agree with that?

SR: I absolutely agree. He just does a phenomenal job at letting the players have enough freedom so they don't feel restricted, that they have roles to grow, and the players feel like they have responsibilities to do well and get better. That's sometimes the biggest hurdle, that players take responsabilities and be accountable for their strengths as well as their weaknesses.

There were a lot of changes in the Wolves front office this offseason. Was it stressful for you knowing perhaps your job was at risk with the new people managing the franchise?

SR: Every time there's change, it makes all of us to feel a little bit worried about where the changes are going to come from, but I felt we've done a great job as a staff, and we unfortunately had the lockout two years ago and the last season we had a ton of injuries, so that made it really difficult for people to see the impact we had on the organization and the players. This is going to be a key year for us to make sure that people see how good we can be.

Which player did you work with the most in Minnesota? Maybe Ricky Rubio?

SR: I worked a little bit with Ricky Rubio but the main guys I worked with were the post players and the big forwards. It's kind of ironic to do that considering I played the point and the shooting guard positions my whole life. But it was a comfortable transition for me because in my mind I always knew what I wanted my bigs to do. And that's how I tried to train them and develop them.

Do you think Derrick Williams can become an efficient post player?

SR: I think he can be very effective. He's not going to be a traditional post player like the ones you and I grew up watching. In the 80's and the 90's there were a lot of great post players who played with their backs to the basket. Derrick is kind of a new way of a post player who uses more face-up game, that posts up off the block, attacks with one or two dribbles… He does have to develop some type of a back-to-the-basket comfort level and gain confidence. What's most remarklable about Ricky Rubio, even at his age, is how he plays like an aggressive, confident, veteran ball player. When Derrick Williams learns that, we'll see a lot of improvement. He has all the physical tools.

What's the best work ethic you have ever seen in a player?

SR: Kyle Lowry would be one player I'd mention. He really enjoyed getting in the gym and working on his game. And for the first half of the lockout season he was probably one of the best 10 players in the league. And the other one would be Luis Scola. He was the ultimate professional. Every day was like clockwork: he did his footwork drills, then his shooting drills… He was extremely professional. Two guys that I would add to the list would be Ricky Rubio and Nikola Pekovic. Those two guys, every single day, they had to do something to get better, watching film, getting in the weight room, even getting treatment to take care of their bodies.

How far away do you think you are from getting an opportunity to be a head coach?

SR: You know what? Not far away. I don't think any young coach could ask for a better coaching staff that I came into. All of them are former NBA players: Adelman, Terry Porter, TR Dunn, Jack Sikma and then in Houston we had Elston Turner. All I had to do was just sit back and keep my mouth shut, listen and learn. After almost six years of working with a staff like that in the NBA, I'm sure I'm ready for a head coaching job for a college level or maybe a D-League opportunity. The NBA? Let's say maybe five years. Then I'll be ready to do something in the NBA and lead a team.

How much do you think the political part factors in when getting an NBA head coaching job? Is it only working hard or the other thing matters too?

SR: I think both things have to work in your favor. There's a lot of coaches that put in the time and work their tails off. They put in the time and they have the intelligence, the savvy about coaching… They are now giving opportunities to some of the younger guys of my age group, with Jacque Vaughn, Jason Kidd, Jeff Hornacek… There's a youth movement right now in coaching and in management. Some people want proven and experienced, but others are taking a chance on young. Hopefully one day it will be me.