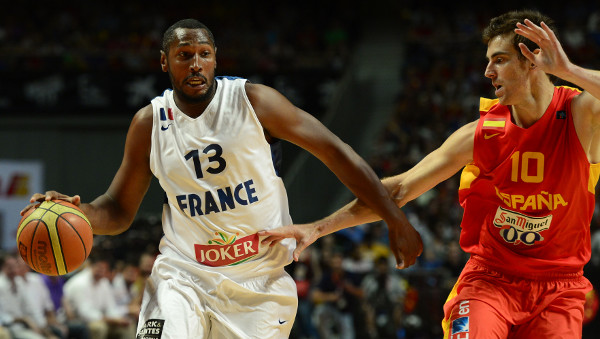 We recently ranked NBA players in terms of loyalty to their National Teams. In the last 13 years, it was you and Luis Scola at No. 1. But there were other French guys at the top of the list such as Tony Parker or Ronny Turiaf. Why do you think there's such loyalty by the French players to the National Team?

Boris Diaw: Well, there's two things, you know. First, we love to play basketball, we like the competition. Also we have a great time here, we have a good team spirit. We work together and we have a good time and it's good to be back to the team in the summer time. The other thing is that Parker, Turiaf, myself… We started really young playing in the National Team, maybe when we were 13, 14 or 15 years old. So we had that passion of playing for the National Team real young and in 2000 we won the gold medal at the Under 18 European Championship in Zadar, Croatia. It was a great feeling and then you are just looking for that, over and over again, you come back to try to feel that same thing again.

Don't you get tired of seeing Tony Parker every day all year long for so many years?

BD: [Laughs] I'm tired, for sure. Nah, it's always great to come back and face another challenge of doing something good with the National Team.

Do you think the Eurobasket can help you, De Colo and Parker in a way to heal the pain of losing the Finals?

How was the feeling following the Finals after losing against the Heat?

BD: It was tough, it's never easy to lose. It was a tough time, you think about it… You try to take it off your mind. But there's nothing you can change about it. Sometimes I still think about it, I'm still very disappointed that we lost. The only thing you can do is come back next year and try to do it again.

Was there one moment at the end of Game 6, before Ray Allen hit the three, that you thought 'We are champions'?

BD: Not champions but when we were +5 of course we were like, 'OK, that's pretty good so far'. We were pretty close but we weren't champions yet.

How would you compare the sadness or devastation after the Game 6 loss and the feelings following Game 7?

Who do you think has to step up in San Antonio in order to be back at the Finals?

BD: We've got to do the same thing. Of course it's going to be different guys doing different things. The Spurs always have young guys that come out of nowhere and play really good. We had a great season and great playoffs.

How good do you think Kawhi Leonard can be?

BD: He's great. I think he's going to be an All-Star one day. He's got it all, he can do everything on the court: plays defense, gets rebounds and he can score. Everything.