Gigi Datome: "I would like be for the Pistons what Shane Battier is for Miami"

Gigi Datome: "I would like be for the Pistons what Shane Battier is for Miami" 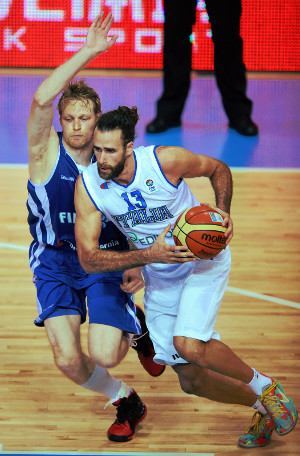 Why are things clicking for Italy this year at the Eurobasket compared to previous FIBA competitions?

Gigi Datome: We are satisfied. After several years underachieving, we are overachieving right now. But we still want to push ahead. We are playing very good basketball and the thing I like the most is the mentality and the attitude in which we're playing most games. Fans in Italy are paying attention. There were lots of Italians watching us in the first round and you can see on Twitter and Facebook that they care. Nobody expected us to advance to the second round, but we surprised everybody – especially in Italy.

Do you feel any extra pressure  because you're an NBA player now?

GD: No, no, no. First of all, I don't consider myself an NBA player because I didn't play in the NBA yet. When I play basketball, I just go to the court and try to play my best and contribute. The team has confidence in me and I'm satisfied for this. I look forward to having more responsibilities with the team in the future.

How did the NBA interest finally materialize into an actual contract?

GD: Last year there was a lot of talk about Rome and scouts came from overseas to see me. There was a lot more attention from scouts and managers. Then this year was the best for me in terms of performance. I was the MVP in the Italian championship and everybody knew me. This was really the first year when I had the opportunity to go to the NBA. I was lucky because I had the possibility of choosing among several teams. I'm looking forward to start and see if I deserve minutes and I can be an NBA player or not.

What expectations do you have for yourself in this rookie year?

GD: For sure, it's not going to be easy for me. It's my first time outside of Italy and first time in a league that I don't know. Maybe I will need some time to adjust. I hope to have the opportunity to see the court and show my skills. That's why I signed for two years because usually in two years you're going to have your opportunity. But I hope I can show my best from the beginning.

How would you describe yourself to people that don't know you? Would you compare yourself to any current NBA player?

GD: It's tough to make comparisons because all NBA players are very good players and I'm a rookie, so nobody knows me. I would like to make myself known over there. I'm an athletic player and a shooter, for sure. That's why they signed me – to open up the court. I'm a player with great passion for the game. I would like be for the Pistons what Shane Battier is for Miami. Not the star, for sure, but a player that's a shooter and contributes to the team's good results. Maybe you're not a star, but you're helping the team. That's who I want to be.