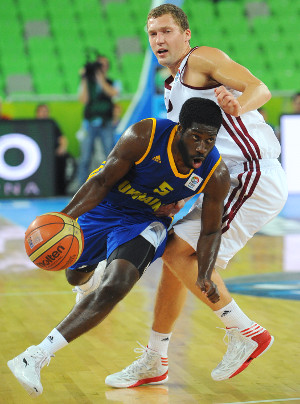 American Olympic champion Carmelita Jeter and the rest of her family are waking up at the wee hours in the States these days to watch one of their own play at the Eurobasket for Ukraine. Former King Pooh Jeter, Carmelita's brother, is one of many U.S.-born players competing for foreign teams in FIBA tournaments this summer and one of the most successful at it too. Jeter has become an unlikely leader for a team that's close to earning an unexpected spot in the quarter-finals of the tournament.

So how was when you told your family and friends that you were going to play for Ukraine at the Eurobasket?

Pooh Jeter: Well, when I first told my parents, they were like 'Wow, among all the people why they would pick you?' We felt like it was an honor, really. I've known people in Ukraine since my first year playing with BC Kyiv, so I've always had a relationship with the players and [Ukrainin basketball federation president] Sasha Volkov. Earlier when I played in the D-League I met coach Joe Wolf, who ended up as assitant coach here… Then he talked with coach [Mike] Fratello and that's how it all really started. It's been special learning from coach Fratello and I'm glad I chose to play here.

Does it feel a little weird to be wearing this jersey?

PJ: No, because I never really got the chance to represent the U.S. When I received these colors I treated it the same way I treat playing for any other team: go out there, play hard and make sure I do my job. I'm thankful, it's an honor.

But I guess it's a little different for you… For your Ukrainian-born teammates, it's national pride at stake.

PJ: They are probably used to seeing this. It's been going on for a while: JR Holden representing Russia, Bo McCalebb (Macedonia), Dontaye Draper (Croatia), Zack Wright (Bosnia-Herzegovina)… It's so many American point guards taking these spots… If I was a rookie coming out of school, it would probably be weird but I'm such a veteran in Europe and in this basketball world so we just treat it as just 'Me coming to their team'.

Have you spoken with the rest of the American players at the Eurobasket about how crazy this situation is in a way?

PJ: Yeah, Draper has been a friend of mine for the last five, six years. He always told me about it, that I should do it. And lot of my friends were telling me 'Bro, you've got the opportunity to get a passport'. So I said 'Why not?'. Even though I am signed in China for the next two years and I wouldn't be able to use the passport now. But in Spain, where I'm very known, I would be able to use it if I go back there.

How was that phone call when you were told Ukraine wanted you?

PJ: My agent Andre Buck told me 'Yo, this is getting serious, man'. I really thought about it and all my friends told me I should do it. You are going out there, you're going to play basketball, even though you are away from home… Get that experience, playing for coach Fratello. Go for it. Everybody was pushing me to do it: Baron Davis, Bobby Brown, Brandon Heath, Trevor Ariza…

What about the NBA? Do you think it's going to happen again for you?

PJ: Well, I hope so. The best thing about this situation, if the opportunity does present itself I'd go for it but if not, I have to be thankful that I'm able to play this game that I love and travel around the world and do what I do.

How about that year in Sacramento?

PJ: They always gave me a chance. When I first came out of school, they were the first ones to give me a partial guaranteed contract and five years later they gave me my full guaranteed contract. I also remember playing with Tyreke [Evans] and my bro DeMarcus Cousins and Jason Thompson…

You're friends with Cousins?

You're going to play in China next season. Do you have the possibility of going back to the U.S. and continue to play at the end of the year in the NBA?

PJ: Yeah, most definitely. The best thing about last year was to put my name out there in China playing against Stephon Marbury, although we lost in the Finals. Now I've signed for another two years and I'd be happy if the opportunity presented itself, we'll see. I'll be happy either way because I still get to do what I love to do.

And the money in China is good.

PJ: For sure it is. Best thing: I'd probably make more money in China than I would make in the NBA right now. 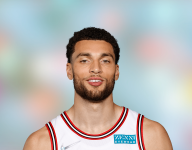 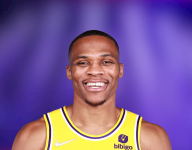