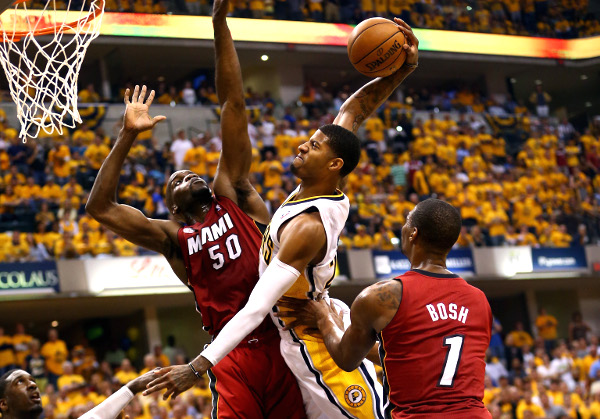 The question on the table is this: Is Paul George worth his brand-new max contract?

There are multiple reasons why he is indeed worthy of being paid an average of $18M for each of the next five seasons. At the same time, George has a number of deficiencies that might hinder his becoming the superstar his new contract supposes.

His length, his quick feet, and his willingness to play hard on the other side of the ball make him a plus-defender. Count his 1.8 steals per game as one indication of why he was named to the All-Defensive 2nd Team. However, since he weighs only 221 pounds, George is susceptible to being bullied by the occasional bigger and stronger opponent.

PG is a streak-shooter capable of carrying the Pacers’ offense for significant stretches. But his shot selection is sometimes questionable as evidenced by his .419 field goal percentage during the regular season. Plus, his proficiency from beyond the arc (.362) is adequate but not outstanding.

He’s quick to the rim and quick off his feet, but isn’t a reliable finisher in a crowd of big men.

George is a willing passer (4.1 assists per game), yet he too often makes poor decisions with the ball (2.9 turnovers). Interestingly, both of these stats increased in last year’s playoffs – 5.1 assists and 3.8 turnovers.

His 7.6 rebounds per game translates to one every 4.9 minutes. This is approximately twice the number expected from a small forward.

The fact that he responded to the playoffs by increasing his regular-season scoring output of 17.4 points per game to 19.2 in the playoffs demonstrates his ability to play his best against the best. 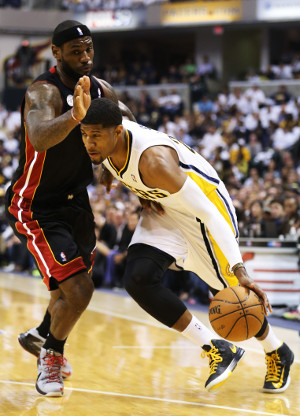 In particular, Game 1 of the East Finals proved George’s ability to deliver in the clutch: His dramatic 3-pointer sent the game into overtime. Then, with 2.2 seconds left in the extra period, he converted 3-of-3 from the stripe to give the Pacers the lead. That they would lose the game on a driving layup by LeBron James does nothing to diminish George’s courageous performance.

Even though George was named the league’s Most Improved Player, his desire to get better has certainly not diminished. It’s a good bet that his shot selection and overall decision-making will be more judicious, his long-distance dialing will become more reliable, and his individual and team defense will become even more effective.

For sure, George’s humongous contract could very well have dire financial consequences for Indiana far-on down the line. However, any NBA team that aspires to win a championship here-and-now has to be willing to pay a multi-million-dollar luxury tax bill.

Can the Pacers dethrone the Heat?

Only if the relatively unathletic Hibbert can learn to play defense without fouling; if Lance Stephenson can get his game under control; if West can get more help on the defensive end; if Luis Scola has anything left; if a healthy Danny Granger can bring his hot-shooting-poor-handling-subpar-defense game plan up to a championship level… And if George can play well enough to move up a notch or two from his current status on the All-NBA Third Team.

All things considered, given his talent, dedication, unselfishness, and unlimited potential, the Pacers were wise to lockup the 23-year-old Paul George for the foreseeable future no matter what the cost.