Whatever happened to Terrell Brandon?

Whatever happened to Terrell Brandon? 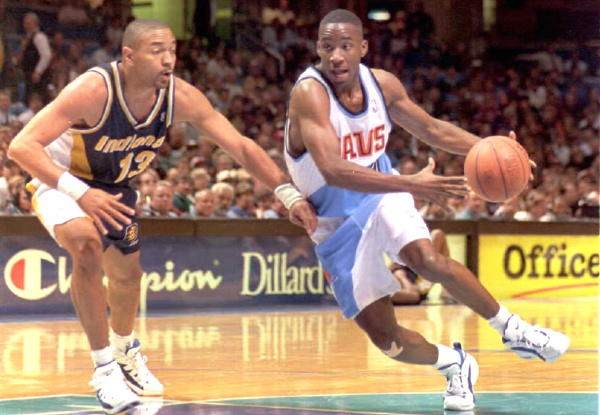 Terrell Brandon was a two-time All-Star during his 11 NBA seasons with Cleveland, Milwaukee and Minnesota. Currently a successful businessman in his hometown of Portland, the 43-year-old former University of Oregon star has aspirations of returning to the NBA as an executive. HoopsHype recently talked to Brandon about his NBA days and his future plan.

Tell us what you are doing business-wise these days.

Terrell Brandon: I have owned a barber shop for 21 years, The Terrell Brandon Barber Shop. I also have a dog grooming business called Show Dogs. I have also promoted old-school shows such as hip-hop and jazz for a number of years.

Do you ever cut hair in the barber shop?

TB: People ask me all the time if I cut hair but I only did it one time, during the grand opening. Otherwise I do everything else such as sweeping hair off the floor, taking out the garbage and answering phones and I love talking to the young people who come in. It’s funny but owning a barbershop is something I always wanted to do as a kid.

As well as you have done in business, would you like to eventually get back in the NBA in some capacity?

TB: I would like to get back in the NBA in an executive position. I am only 43 and not out of touch with things. I would like to be an assistant general manager and with the experience and knowledge I have I think eventually I could put a team together as a general manager. I was a point guard and I think I know what it takes to build a winning team.

TB: I do a lot of community things and, if I don’t have any set plans, I like to go to the barbershop and work. I have a lot of high school coaches come in asking for advice and I try to be that cornerstone of the neighborhood.

At the end of your career, your knees simply gave out. Was it a difficult adjustment, leaving the NBA?

TB: Just the first year and then now during the playoffs you kind of feel it and understand what young people are going through. You don’t get the feeling you want to play, but I am so proud that I was able to be in that same predicament. Once retired, that first year my mind was OK, but my body was like going through convulsions. Every October I was supposed to be sore while preparing for the season in training camp. The one thing I did enjoy was not being sore and not having ankle sprains.

Do you play sports to keep in shape these days?

TB: I do a lot of walking and play golf in the summer. That is my relief now and I jump on the stair master, try to eat right and not gain excessive weight. I am still at my playing weight.

How about your family?

TB: My parents are still living. I am still single and I have my sister and brother-in-law and nieces and family in Portland. I have an older son Trevor who is at Texas Southern and is a great kid and gets great grades and hasn’t given me a lick of trouble.

Your first All-Star Game in 1995-96, the starters for your Eastern Conference team were Penny Hardaway, Shaquille O’Neal, Grant Hill, Michael Jordan and Scottie Pippen. What was that experience like?

TB: You are trying to be cool, but I was in awe every second that I was in the locker room. The times we practiced and also the times I was on the bus with these great players I cherished every second. It was like being a rookie all over again and I was doing rookie chores and it was fun. I was trying to figure out if I really fit in.

What rookie chores did you do?

TB: Grabbing the basketballs, getting some Gatorade and the veterans were just messing with me and I would do anything, it was such a pleasure. I knew I would retire and these would be things I would cherish and talk about.

Your second All-Star game the next season was in Cleveland and you were still with the Cavaliers. What are your recollections of that game?

TB: It was a beautifully hectic situation because I was so proud. The city had adopted me and I had been there five years and it was great to represent my family, the city of Portland, the Cavaliers and all of Cleveland. It was hectic doing all the interviews and commitments, but I loved it.

You came out of the University of Oregon after two years. Was that a difficult decision?

TB: Yes. It was like a senior who missed getting to participate in senior night and say goodbye. What is interesting is that my first NBA preseason game was in Eugene against the Portland Trail Blazers. I was able to come back and unofficially give the fans my heart and it kind of worked out.

You were involved in some wild three-team trades. What was your reaction when you were first traded from Cleveland to the Milwaukee Bucks in a three-team trade that also included Seattle?

TB: The first time you are traded it is like your first kiss you never forget it. I was getting ready to go to Gund Arena and got a call from Mr. (Wayne) Embry and coach Mike Fratello. At first, there was initial shock but after that I saw that guys like Vin Baker and Shawn Kemp were in the trade and I was proud because it meant that somebody wanted me. 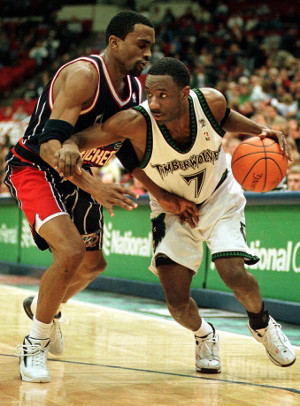 You were a teammate of Kevin Garnett in Minnesota early in his career. What was that like?

TB: It was a beautiful experience. He had just as much fire in practice as in the game and you could see the maturity in him (grow) every day. We used to sit and talk basketball after practice and he was like a kid soaking it all up. He used to ask me about the past and what it was like in the NBA. He was a beautiful person who you appreciated being around. Sam Mitchell and I tried to mentor him and I am so proud of what he has accomplished and he will be a first ballot Hall of Famer and I am proud to say I was his teammate.

Was KG the best player you ever played with?

TB: I have to say yes. I played with Larry Nance. I compared these two. Larry Nance was a great player.

Do you remember your playoff series while with Minnesota against your hometown Portland Trail Blazers in 2000. You lost the 3-1 but in the one win you had 28 points and 12 assists. What do you recall about that series?

TB: They were so much bigger than we were. Their frontline was huge and talented and I also remember going up against the baby I raised, Damon Stoudamire, that was a joy for Northeast Portland to see the local players going against each other.

Do you have a welcome to the NBA moment?

TB: My first day in training camp as a rookie I was so excited and happy to be there and was given my Nike shoes by the equipment manager. I put on my shoe and felt a squish in the bottom of the shoe and thought maybe it was just because they were new. I could see my teammates were trying not to laugh. They had put mustard and mayonnaise and ketchup in the shows and that was my first rookie experience and we laughed so hard about it.

Are there any games you recall?

TB: My first regular season game was in Portland against the Trail Blazers and I just lucked out to be able to come home. Also playing against Michael Jordan has to be the highlight of pretty much every player and he broke our hearts just like he did against everybody else. (Note: Brandon scored 15 points and had six assists in his NBA debut, but his Cleveland team lost 117-106 at Portland).

You were traded to Atlanta but never played due to your knee. How tough was it to see your career end?

TB: It was tough. I was 31, but felt like a running back in football. At that point you feel you know the game. but surgery is surgery. The wear and tear came over time.

Who were the toughest point guard you played against?

TB: I would stay (John) Stockton, (Gary) Payton, Isiah Thomas and Damon Stoudamire. Damon was left-handed and was hard to guard him.

Would you say that you played in one of the great point guard eras?

TB: Absolutely. In addition to the guys I mentioned, there was Mookie (Blaylock), Kevin Johnson, Terry Porter, Muggsy Bogues. Plus I didn’t mention Nick Van Exel or a guy like Michael Adams, who could put up eight threes on you. I could go on and on about the point guards. Remember, when I came to Cleveland I was backing up Mark Price, who was a great teacher and one of the most underrated point guards in the history of the game.