How to fix John Wall's shot

How to fix John Wall's shot 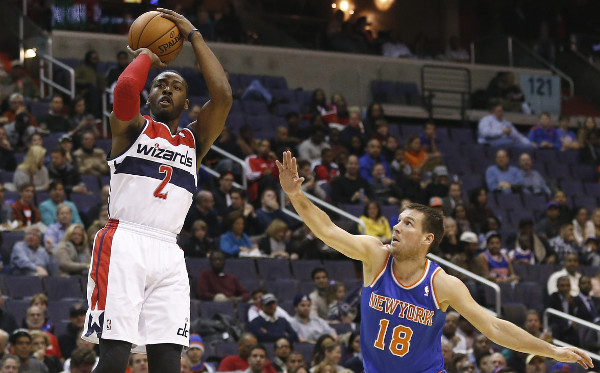 John Wall has always carried the “potential superstar” tag. Since the day he arrived at Kentucky in 2009, he was labeled the next big thing that would hit the NBA scene. However, he's still no superstar at this point and his inconsistent jump shot is the main reason why.

Let’s take an in-depth look at why Wall has struggled and what he can do to fix his shooting woes to become the player he should be.

WHAT IS WRONG WITH HIS SHOT?

Mechanically, Wall’s shot is slightly flawed. Instead of having an entirely smooth motion, he has a slight hitch in his shot as he brings the ball too close to his body before his release. The ideal release angle is 48 degrees. Wall’s angle of release is closer to the 60-65 degree range. Not only does this affect Wall’s shot from a mechanical point of view, but it also effects his release time.

That extra slight hitch adds to the time it takes for the overall catch-and-release of his shot. It takes Ray Allen, who is widely regarded as one of the top shooters in NBA history, 0.73 seconds to release his shot from the point at where he catches the basketball. Wall’s catch-and-release is slightly over one second, far too slow. Most great shooters and even good shooters in the league are below one second on their catch-and-release.

The slow release hurts Wall as he is missing out on potential catch-and-shoot opportunities. The other flaw in Wall’s shot is his lack of acceleration. He tends to decelerate when he catches the ball and begins his shooting motion. Most people believe that the ideal release point is at the apex of the jump. Although it is close, this is not the case.

The ideal point to release the ball is at 90 percent of the jump. This allows for the ideal trajectory to reach the golden 48 degree release angle. Once players are at the apex of their shot, the window for optimal arc closes quickly as they begin to enter the landing phase. This causes the shot to be flat. The flatter the shot, the lower the margin of error becomes. The deceleration puts too much dependency on his arms and not enough on his legs, which is why he brings the ball back close to his body before his release to generate more power.

It’s not necessarily how high a shooter jumps, but accelerating into their jump shot is a must.

Wall’s mechanics need some fine tuning, but the most glaring problem in his struggles is his shot selection. Of course, as a shooting coach, I would prefer that Wall has the perfect mechanics, but more importantly, I would want him taking only good shots within the offensive flow. Wall’s offensive game is mainly transition opportunities and creating shots for teammates.

However, it is a completely different story in half-court sets and isolation situations. As of Friday, Wall ranked in the bottom 10 percent of the league in isos and was shooting a mere 18.2 percent for the season. That’s a glaring stat that screams Wall’s shot selection is poor.

He’s only slightly better in half-court situations where he is the primary ballhandler, ranking in the bottom 21 percent and shooting 29.9 percent. Wall is falling into the same trap that has engulfed “volume scoring” point guards like Allen Iverson, Stephon Marbury and Steve Francis in the past. All extremely talented players, but all extremely poor in the shot selection field.

WHAT SHOULD HE DO TO REMEDY THE PROBLEM?

It’s a known fact that scoring ability is in Wall’s blood. He has a knack for getting to the hoop and putting points on the board. However, if he continues on the same path he is on with flawed mechanics, a slow release and poor shot selection, then he will never fulfill his potential.

The good news is Wall’s problems can be cured. First off, with Wall’s mechanics, he is going to have to take a serious approach to changing his release point more out in front of his body as opposed to bringing the ball back close to his body and his shoulder before he releases his shot. This is going to take the time and commitment of truly being the first one in the gym and the last one out putting in the extra time.

Wall is also going to have to focus on accelerating into his jump shot. As athletic as he is, he is doing himself a disservice with his lackadaisical deceleration approach.

Ideally, Wall needs to make his move attacking the ball while it is being passed to him instead of waiting for the ball to get to him. This is what I call the “boost step.” It’s a hybrid of a left, right step-in mixed with a mini hop step to generate the most power and acceleration into the shot so that right when the ball touches the shooter’s hands they are able to go directly into their shot without wasting any time or adding any extra motion. This will help Wall’s acceleration into his shot as well as improve his release time to under one second. 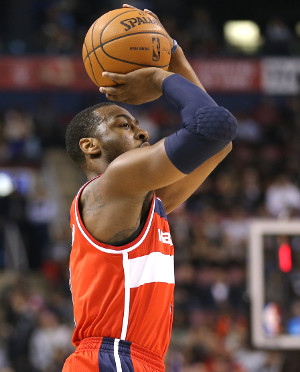 Shot selection should be the easy part. However, for a player who has played with that mentality his entire basketball career, it is not an easy fix. That being said, it can be done. Think Chris Paul and his pass-first mentality and ability to score when it is needed.

Of course, Paul is the best point guard in the league, but Wall has the talent and potential to eventually reach that level.

Without being able to identify the problem himself he will never be able to overcome it. Wall’s main strength is scoring in transition. Another strength of Wall’s that is lesser known is his ability to knock down spot up catch-and-shoot jumpers. Even though Wall’s mechanics are slightly flawed, when he is able to get his feet set and is on balance, he is able to shoot an effective percentage. Wall ranks high in that area with 10.3 percent of his points coming from spot-up situations.

Wall needs to stick with his strengths and stay away from pull-up jumpers and isolation situations. He needs to control the offense with his ability to create for teammates and let his shots come to him when he is able to attack in transition and when he is able to get his feet set in a spot-up situation.

If Wall can focus on these aspects while continuing to refine his shooting mechanics and develop more acceleration into his shot with a quicker release, then he will eventually become a great player in the league

If he doesn't, he won’t live up to the five-year, 80 million dollar contract extension he received last summer based on that double-edged word – potential.