Kyle Korver: "I thought there wasn't any chance of beating Dana Barros' record"

Kyle Korver: "I thought there wasn't any chance of beating Dana Barros' record" 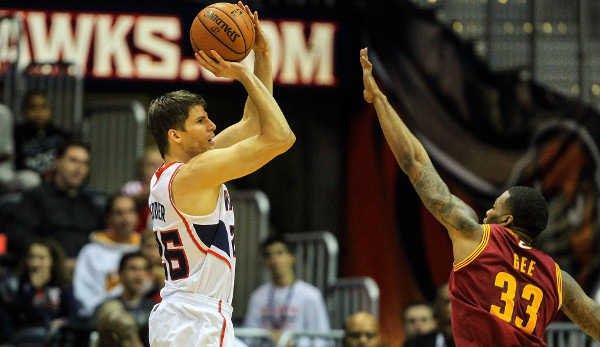 How was the feeling when you beat the three-point record?

Kyle Korver: It was cool… I think just beacuse the streak was talked about for such a long period of time, it kind of gave people a lot of time to hear about it. It kind of meant something to a lot of people… A lot of people were excited about it, I was definitely really happy to be done with it… It was a really cool night overall. There was a really good energy.

How were you feeling going into the game?

KK: I felt OK. I was pretty nervous the previous game, the one in which I was supposed to tie the record. That game took forever because you don't want to get that close and not get it. I was ready for it to happen, I'll say that.

When did you find about the Dana Barros record and that you were on course to possibly beating it?

KK: I didn't even know that this was a record for a long period of time. I think the Hawks' record was like in the 40s or something. I found about that and then I kind of heard about the rest of the list. I heard Barros' number was 89, so I said 'Wow, that's a really incredible number, I don't think there's any chance I'll ever get to that.' But I tried not to think about it too much. I took each game as its own game. My job is to go out there and knock down shots. I was just trying to do that well.

Have you spoken with Dana?

KK: I have not, I've never met him. You would think, in the social media day that we have today, that there would be some kind of connection but I've never spoken to him.

The season is going pretty well for you. You're getting career-high minutes, career-high shooting percentages… Why do you think you are to such a hot start of the season?

KK: There's a lot of things. It's the best I've felt in quite a few years. My body feels good. The system that we run, I'm a good fit for it. We play good team basketball maybe because we don't have a superstar. But we have very good players and the ball really moves around.

You mentioned your body feels pretty good right now, and the numbers seem to support that. I was looking at the player tracking tools on NBA.com, and checked distance traveled per game… The Top 40 are all twenty-something players, and the only one who is thirty-something is you. Were you aware of that?

KK: Well, I wasn't aware of that. This is kind of the way I've always played. At the very beginning of the game, the guy who's guarding me is probably faster than me, but if I just keep on running, keep on running, eventually he's going to get tired, then I'm going to be faster [laughs]. I don't like to stand still. I've always liked moving and running around the court. That's kind of the way I'm wired up, I guess. 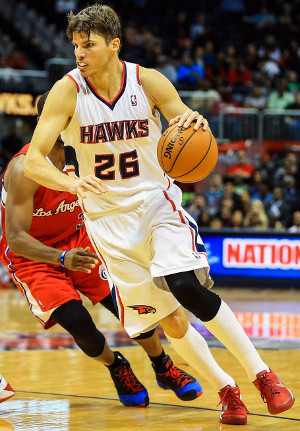 Are you kind of a fitness fanatic?

KK: Yes, especially as you get older you have to start paying attention to these things. Learn the importance about nutrition, diet, rest, activating certain muscles. The earlier you learn about these things in your career, the longer you're going to be able to play. I know that if I want to keep on playing in the NBA for a bunch more years, I'm going to have to do this.

The last couple of years you have been starting for the most part, but earlier in your career you were coming off the bench… How has been that change for you?

KK: I think it's just the team, and the opportunity. We had pretty good teams in Chicago, the same in Utah… I've always prided myself in playing in the fourth quarter, it's just a little different now that I play more in the first quarter too. It's been a bit of an adjustment, but I've never made a big deal about starting or not starting, and now it's the same. I just want to play.

When you came into the league, you were not a very high draft pick. Early in your career, did you feel like you belonged in the NBA?

KK: Yeah. You don't make it unless you believe that you can do it. Every rookie that comes in believes that he can do it. Once you get an opportunity you have to capitalize on it. I didn't get to play in the early beginning, but I was fortunate that a lot of guys got hurt at the end of the season and got to play quite a bit.

Who do you think is the best passer you have played with? Who was the guy that was really getting you the ball in the right place at the right time?

KK: I've been fortunate to play with some really good point guards. I played with Allen Iverson. He really looked for me. He commanded a lot of attention and he got me a lot of easy shots. Deron Williams in Utah… Andre Miller! He was a great, great passer! I got more layups playing with him than any other point guard I've ever played with. He was so good… I got a lot of easy looks playing with him. Derrick Rose was the MVP when I played with him… Jeff Teague is a great point guard… It's hard to choose one of them. I've been super fortunate as someone who is kind of a catch-and-shoot player to really play with great point guards.

You were a free agent last summer and there was a point early in July when everybody was kind of expecting you to sign with the Brooklyn Nets. What happened there?

KK: We talked to quite a few teams and Brooklyn was one of them. It was right after their big trade and there was a lot of excitement about them. I had some good connections, a couple of players of my team, the general manager there had actually drafted me in Philly… At the end of the day, both me and my wife wanted to come back to Atlanta. We wanted to be a part of what they are building here. We believe in their vision and we're excited to be a part of it.

Have you been approached recently about playing with the U.S. team? In the past, we've seen players like you, very good shooters, that made the roster.

KK: No. I've never had. I did a trial in Vegas a couple of years ago when I was with the Jazz and played in a mini-camp, but I have not been contacted.

Is that something that would appeal to you?

KK: Oh man… You will always jump all over an opportunity like that. Yeah, definitely I would.

You sound a little disappointed.

KK: Nah, if it happens it would be amazing, but I'm not going to get upset about it.

About your foundation, how's that going right now?

KK: It's going really well. The vision of our foundation is every city that I play basketball in, we try to identify someone that we really believe in, that has really great gifts in life and wants to do really something special in the community, and we try to help them do that. We've created almost little non-profits. So for example we have a mission in downtown Philly. In Utah, one of our friends is a great builder and we found this need for handicapped ramps so kids in wheelchairs can get in and out of their homes. So he's built several hundred ramps over the past four years for free for these families. In Chicago, my brother and his wife have started a non-profit t-shirt company called SEER and basically they sell t-shirts and raise awareness for different causes. The money that they raise, we give away to programs, events and needs in the city of Chicago.

Of all the things that you have accomplished with your foundation, which one makes you feel better?

KK: I love seeing the people who run the different iniciatives, they are really amazing people, and to watch them go as leaders and really make differences in their communities it's a pretty huge thing. It's a really good thing to watch.