Are the Blazers for real?

Are the Blazers for real? 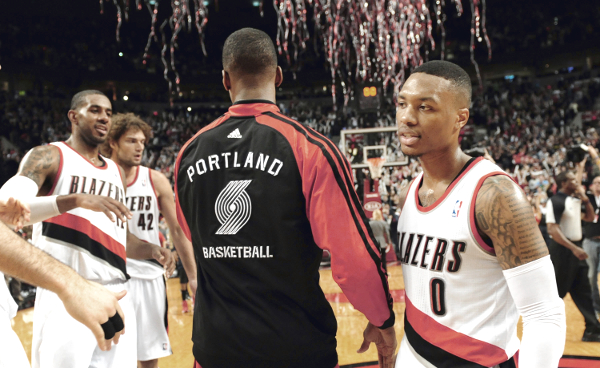 Despite Saturday night’s aggravating loss to the LeBron-less Heat, the Trail Blazers still sport a 24-6 record – only a tick behind the marks compiled by both Indiana and Oklahoma City. And the question that Portland’s surprising success raises is this: Are the Blazers for real?”

In truth, the query is really asking if Portland has the goods to at least reach the Finals and possibly even dethrone Miami.

Here are the relevant points of interest on both sides of the equation:

YES, THEY ARE LEGIT CHAMPIONSHIP CONTENDERS

There are two major weapons in Portland’s offensive arsenal – the most prominent being the uncanny long-range bombing accuracy of Damian Lillard, Nicolas Batum, Wesley Mathews and Mo Williams. These guys have unlimited range and a total license to cast off treys in nearly every situation. The Blazers’ unselfish ball-movement emphasizes hand-offs, cutting, curling, down-picking, and spotting up in the corners whenever someone (just about anyone) can carry the ball into the lane. It’s a perfect marriage of personnel and Terry Stotts’ offensive philosophy regularly generating relatively uncontested shots from beyond the pale. 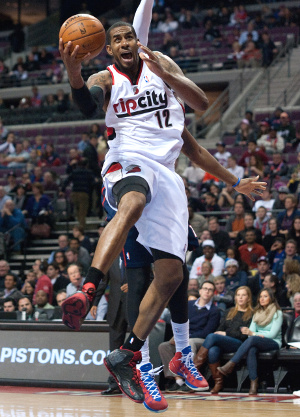 The other mainspring of Portland’s scoring machine is Aldridge. When he receives the ball on his favorite spot (the left mid-post), he wants to shoot a long-armed turn-around-jumper over his right shoulder that’s literally unblockable. The counter is taking his right hand to the middle. Aldridge is also a dead-eye mid-range shooter, and when double-teamed he’s comfortable delivering an out-pass to one of the three-point shooters who are necessarily left unguarded.

Matthews is Portland’s only other low-post threat, but he sometimes neglects to seal his defender properly and/or meet the incoming pass.

Robin Lopez has a big, strong body and good hands, sets sturdy screens, is active on the offensive glass, and scores the majority of his points on put-backs and drop passes.

Lillard has a terrific right-to-left crossover but rarely penetrates in half-court sets. Indeed, most of his assists come on swing- or kick-out passes to his fellow three-point shooters, and the lion’s share of his points come on jumpers. Similarly, both Batum and Matthews are primarily perimeter shooters.

Mo Williams is the shoot-first backup at the point, but is an explosive scorer who can carry the offense for long stretches.

At the other end of the court, Batum is a plus-defender, while Lopez and Joel Freeland routinely maintain good position.

Portland’s defensive strategy is to clog the middle on ball-penetration and force opponents to beat them from over the top – which is precisely the way the Blazers want to be defended.

Still, the Blazers’ strength is their offense, as demonstrated by their league-leading 108.6 points per game. When they are connecting their treys at their normal forty-plus percent pact, they are capable of beating anybody. 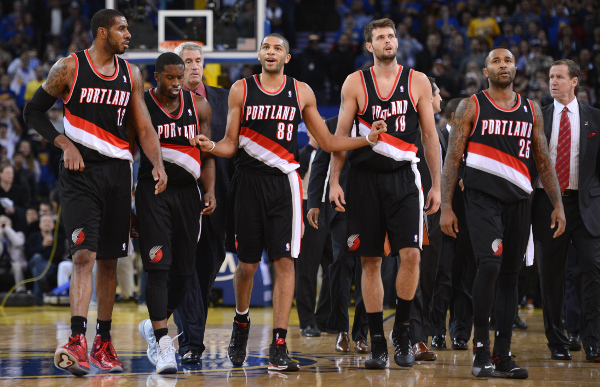 NO, THEY ARE NOT FOR REAL

Let’s start with the bigs. Neither Lopez, Freeland, nor Meyers Leonard is any kind of threat to score in the low post. But that’s not a fatal flaw. However, their most glaring collective problem is that all three have limited lateral movement, are slow off the floor, and can rarely match the pure athleticism of their opposite numbers. In fact, any opponent who can face-up and either shoot or go creates significant defensive problems of each of them. For sure, they all play excellent defensive position, but are unable to react quickly enough to contain opposing attack-minded bigs who have even a modicum of mobility.

Moreover, only Batum is an accomplished one-on-one defender. Matthews is somewhat better on defense than Lillard, and teams like to maneuver Aldridge into situations where he has to play iso defense. Yes, Aldridge has long arms and is an exceptional athlete so he will block an occasional shot, but his defensive efforts are mostly reactive.

Another problem here is Portland’s penchant for switching on high pick-and-rolls, as this tactic frequently creates costly mismatches. Also, when they double-team on pick-and-rolls, they’re very slow in adjusting to what the picker does – whether he’s rolling or fading. And If the Blazers seldom score layups in their halfcourt sets, they yield too many at the other end.

Furthermore, Lillard makes too many careless passes and is more of a shooting guard than a true point guard. Then there’s the Blazers' thin bench where Williams is the only semi-reliable scorer.

The deciding factor is that the Blazers were only 33-49 last season. This particular combination of players simply haven’t yet learned how to win when the postseason pressure is amped up. This was amply demonstrated in Saturday night’s loss to Miami, where the defending champs made the super-clutch plays as the game ticked away, and the Blazers did not.

So, then, the Blazers are like Wile E. Coyote running full-speed off a cliff: He keeps going forward until he realizes that there’s no ground beneath his churning feet – and then he falls.

In sum, the Blazers are at least a year and several players away from being a serious championship contender. Besides the natural maturation that will inevitably occur, they need an athletic big man who can provide some pivotal offense, another wing defender, and at least one more scorer off the bench.

Even so, it’s fun to watch this team, and we should all enjoy their progress through the regular season while we can.