How to fix Kyrie Irving's shot

How to fix Kyrie Irving's shot 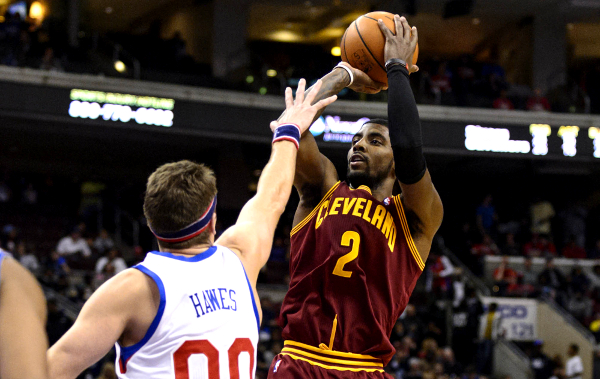 Let’s get this clear right from the start: Kyrie Irving is a transcendent talent. The debate isn’t about whether or not Irving is going to be a top talent in the league; it’s whether he is going to be the next great talent to take over the league.

There’s no denying that at 21, Irving has the potential to be one of the primary faces of the NBA for many years to come. Maybe it’s in his blood. He was born to be an NBA superstar. After all, when Kyrie was still in the womb, his mother (an ex-volleyball player) spent countless hours in the gym faithfully shooting free throws and competing in “knockout” marathons against her husband all for the sake of introducing Kyrie to the game at a young age. A very young age.

So if shooting is in Kyrie’s genes, literally, why have his shooting percentages continued to drop each year he has been in the league? Did his mother not shoot enough pull-up jumpers or spot-up threes? Let’s take a more in-depth look at why Kyrie isn’t as great of a shooter as he is perceived to be and dissect exactly what he needs to do in order to right the ship, become an NBA icon… and become the best shooter in his family.

WHAT IS WRONG WITH KYRIE IRVING'S SHOT?

Unlike the previous subjects and high-volume scoring aficionados: Brandon Jennings and John Wall, Irving’s shot selection is not a problem. At the ripe age of 21, he possesses one of the highest basketball IQ’s in the game. That being said, Kyrie’s shot volume is quickly becoming an issue. The ideal PG range of shots is 11-13 per game. He has sky-rocketed his attempts up to 18.8 per game this season. Only three players in the league have attempted more shots than Irving this season (yes, of course one of those players is named Carmelo).

The Cavs guard has attempted nearly 80 shots more than LeBron James and more than 100 shot attempts above the top PG in the league, Chris Paul. The last time an NBA championship team was led in scoring and shot attempts by a point guard 6-foot-3 and under was nearly a quarter of a century ago: the 1989-1990 Detroit Pistons and Isaiah Thomas. History is not on Kyrie’s side.

Irving has the reputation for being the ultimate playmaking PG and a dead-eye shooter (a reputation that was highly inflated by winning the 2013 NBA All-Star Three-point Shootout). If both of these statements are true, like the public perceives them to be, then why is Kyrie only averaging 6 assists per game and shooting 35.9 percent from behind the arc? Both numbers are substantially below average for high level playmakers and elite shooters.

Kyrie shot 39 percent from three-point range his first two seasons in the league and has dropped off dramatically in Year 3. Not only has his three-point percentage fallen each season, but so has his field goal percentage. Currently, he is shooting a career low 43.0 percent from the field and ranks a very pedestrian 36th among PG’s with only a 1.14 points per possession.

There are a couple fundamental flaws that Irving needs to fix with his shot in order to develop more consistency with range. As you can see in this video:

Irving favors to bring the ball across the midline of his body formulating his release point slightly on his left side and causing a centrifugal force motion in his body’s natural shot rotation. This is a very unusual and awkward release for a right-handed shooter. The key to gaining the optimal fluidity on a jump shot is ensuring there are no wasted and no added motions once the shooter starts his shooting motion from the shooting pocket.

Kyrie spends an extra 0.3 seconds bringing the ball from his shooting pocket on his right side to his eventual release point slightly on the left side of his body’s midline. Not only does this hitch cause for a slower release, but it also causes for inconsistent accuracy due to the fact that he must bring his arm slightly back to the right on his follow through to compensate for his release point in order for his shoulder to finish lined up with the hoop.

Ideally, a high-level consistent shooter wants all parts working on a straight line, finishing with a slight quarter turn to allow the shooting shoulder to finish lined up with the target. A straight line is the quickest way from point A to point B and the less variability in that line, the larger the margin for error; something Irving doesn’t leave himself much of.

The second flaw of Kyrie’s shot is his footwork in off screen situations. Fifty-eight percent of the screens that Kyrie comes off, the defender forces him to flare the screen. Irving's footwork in these situations is not ideal. As you can see in the video:

Irving plants his bottom foot and takes a backpedal step into his shot. This causes a loss of optimal power in his jump shot as his momentum and force is driving backwards and immediately has to be shifting into a forward motion. As shooters backpedal into their shot, they lose anywhere from 35 to 55 percent of their maximum power due to the quick momentum shift from a backwards motion to forwards.

Ideally, as Irving comes off the screen he needs to plant his top foot (the closest to the passer), immediately turn his hips quickly towards the baseline, take a sprint step, and begin to square up his body so that when the ball arrives he is already boost-stepping into his shot. This will allow him to generate his peak power and momentum.

WHAT SHOULD KYRIE IRVING DO TO REMEDY THE PROBLEM?

It’s the middle of July in the dry desert heat of Las Vegas, Kyrie Irving has just finished the second day of Team USA minicamp. Instead of being concerned about which resort pool party he is going attend later, all Irving wants to talk about is how much better he needs to get and how he wants to define himself as a player.

“I don’t want to be known for being the guy that gives up or takes plays off or anything like that. I want to have a consistent effort and be known as a great player. What makes those great players great is just the consistency every night, and that’s what I have to bring,” Kyrie stated in an interview with Sporting News.

With Kyrie, that statement is all you need to know. He is going to do whatever it takes and go to any measure to ensure his game reaches its full potential. As a professional shooting coach, knowing that the player’s mindset is 100 percent committed to becoming great, it makes it that much easier to remedy any deficiency. 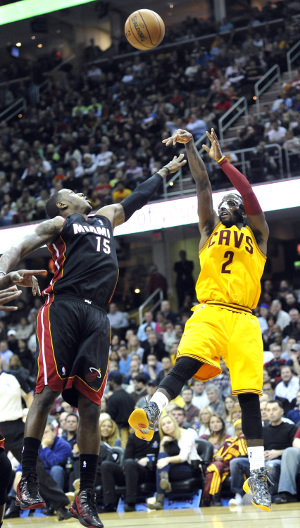 In Irving's case, his basketball IQ is already one of the highest in the league. He continually puts himself in his most effective situations. 37.7 percent of Kyrie’s shots come out of the pick-and-roll situations where he is shooting an adjusted field goal percentage of 52 percent – ranking him in the top 95 percent of the league. His next two most effective scoring situations are isolation and transition, which he is in 16.6 percent and 14.2 percent of the time respectively.

He is above average in isolation situations and is extremely effective in transition, averaging 1.27 points per possession. These statistics show that Irving is fully aware of his strengths and weaknesses and knows how to fully utilize those strengths. Most players don’t realize where their true inefficiencies are, and will continue to try to be something they aren’t (i.e. Josh Smith shooting threes).

Irving’s fix is relatively simple, but it is going to first take him acknowledging his flaws and committing to making the slight adjustments necessary to become great in every aspect of his game. Kyrie ranks in the bottom 14 percent in spot-up catch-and-shoot situations and in the bottom 22 percent in off screen scenarios. These are two facets of his game that, if he improves upon, will only continue to further open up his entire floor game and also make him extremely effective when he is playing in off-ball situations. Think of how LeBron James transcended and continually evolved his game.

At 21, he reluctantly shot spot-up catch-and-shoot threes and rarely used off-ball screens to his advantage. Now defenses have to respect that part of LeBron’s game just as much as they do when he is in transition attacking with a full head of steam.

Kyrie can take the same evolution process, continuing to work on adjusting his release point to the right side of his body ensuring one smooth motion of fluidity in his jump shot. It’s going to take an offseason of constant repetition, but if he wants to become a consistent high-percentage shooter he will make the adjustment.

As far as his footwork, that adjustment can be made in the film room, applying the film to on court situational workouts. There is no substitute for a player visually being able to see his inefficiencies and fully being aware of the adjustments that need to be made. The film room needs to be used as a lab; bring in the problem, dissect it, and fix it.

This is how I fix all inadequacies of the players I work with and I know Kyrie, a student of the game, will do the same. The final adjustment that Kyrie needs to make to fully take his game to the next level is cut down on his shot volume. To become the next elite PG and lead his team to a championship, he can't be the leading shot-taker on his team.

The NBA has been cruel to 6-foot-3 point guards who lead their teams in scoring and FG attempts. Irving needs to realize this and use his play-making ability more in creating for teammates than generating his own shot. In a recent game against Atlanta, Irving went for 40 points. Sure, that looks great to fans when they see that number, but he attempted 33 shots to get there. That deflates his efficiency astronomically. And when you couple that with the second most attempts by a Cavalier teammate was 14, it looks more and more Iverson-esque by the second.

I don’t like to put a lot of stock in PER – player efficiency rating – due to its volatility based on minutes played per game. However, Kyrie needs to rank higher than 34th in the league at 19.59 and separate himself from the Mike Conley’s and Goran Dragic’s of the league.

Kyrie is going to be a great player in the NBA for many years to come. Like I stated at the beginning of the article, that is not the debate. But the difference in being great and being a transcendent face of the NBA is as slight as the adjustments he needs to make to his shot and his overall game. If he can remedy these inadequacies and turn his inefficiencies into strengths, we will all be seeing far far too much of Uncle Drew in the years to come.