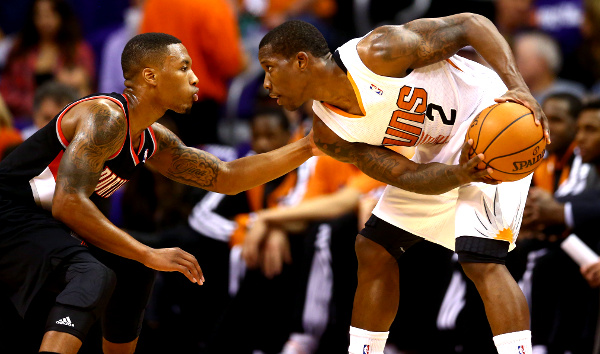 – Eric Bledsoe's Mini-LeBron reputation is warranted if you look at his shooting percentages when he drives to the basket (57.8 percent). Only one renowned slasher beats Bledsoe in this area: LeBron James himself (62.3 percent).

– Nobody scores more on drives to the basket than Mavs guard Monta Ellis (8.3 ppg). Tony Parker comes way behind at 6.7 ppg.

– James Harden not running hard: He's at the bottom of the league in distance traveled per 48 minutes with 2.9 miles. Same exact number as – wait for it – Andrew Bynum.

– How good has DJ Augustin been with the Chicago Bulls? He currently ranks ahead of point guards like Jose Calderon, Kemba Walker or even Derrick Rose in points created by assist per game.

– Portland doesn't have the fastest players – not a single Blazer in the Top 70 in average speed – but the team is not short on effort and stamina. The Blazers are the lone NBA team with three players among the Top 25 in distance traveled per game.

– Nicolas Batum, Damian Lillard and LaMarcus Aldridge have combined for 245.6 miles on the court so far this season. The second trio with the most distance traveled resides in Los Angeles: Chris Paul, Blake Griffin and DeAndre Jordan (237.7 miles).

– Chris Paul-Blake Griffin (177.9) and Ricky Rubio–Kevin Love (175.9) are the inside-outside duos with most touches per game.

– Among the Top 20 scorers in the NBA, Kyrie Irving, Russell Westbrook and John Wall are the ones with the worst catch-and-shoot percentages with 30.8, 31.6 and 32.7 percent, respectively. That's worse than Rudy Gay (34.2 percent).

– Opponents make 52.8 of their shots at the rim when Clippers center DeAndre Jordan is around. That's the worst mark of any player in the Top 19 in blocked shots per game.

– Only 29.6 percent of LaMarcus Aldridge's rebounds are contested. We have to go all the way down to No. 28 in the list of best rebounders to find another player with less than 30 percent of contested rebounds (Kevin Durant).