Dennis Rodman just a toy they are playing with

Dennis Rodman just a toy they are playing with 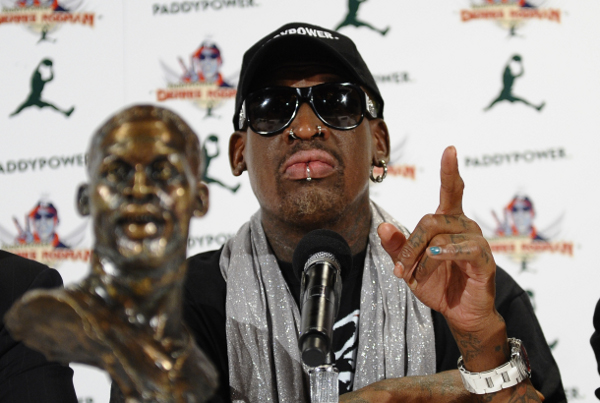 I had never been to a wedding before so I didn’t know how they worked, really. I mean, I was a ring bearer at my aunt and uncle’s wedding when I was about three years old, but I didn’t see how that could relate to the wedding I was watching at the moment. As an 11-year-old, I had only really seen weddings in Disney movies, and even then they were truncated. It seemed, at the time, that a wedding was all about two moments: the opportunity for someone to object, and the kissing of the bride.

So it took some effort for me to decipher what I was seeing. There was Dennis Rodman, slowly walking down what seemed to be a street or a red carpet or something, rocking a wedding dress and a blonde wig. He was both the bride and the groom. I stood up in front of my TV and yelled “I object!” I still didn’t understand weddings, it seemed.

I thought a lot of things about my beloved Bulls (whom I only rooted for because I rooted for Michael Jordan above all else), their star rebounder, society, marriage, and if I was even old enough to be watching that. One thing that never, ever crossed my mind was that this guy would one day be best friends with the son of Kim Jong-Il, that I would also be a pro basketball player in South Korea, and that both would happen at the same time. 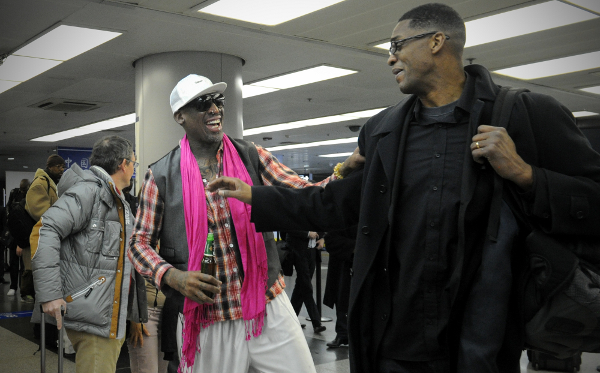 Well, in a move even stranger than marrying himself, it appears that Rodman (like me) has become big in Korea. He’s some sort of unofficial ambassador to North Korea and once again I find that the world makes no goddamn sense. But then again, maybe it does. The world’s most unpredictable basketball player in history is now party to the world's most unpredictable ruling party. Naww. It still doesn’t make sense.

As I sit here in my South Korean apartment, I can’t help feeling like Fievel from “An American Tail.” I can just open the window look out at the horizon and feel that somewhere out there, not too far away, Dennis Rodman is doing the same thing. But he’s not. He and Jong-un are playing Spades, taking shots of Soju, and planning how many stripper servants he plans to have jump out of Jong-un’s birthday cake. Seriously.

The question everyone asks me is what the South Koreans think about this whole thing. I can tell you that with certainty that 99 out of 100 things I have ever brought up about the North elicits a “I don’t care” reaction from the Southerners. When the North threatened to bomb the South a couple years ago, the public didn’t care. When the North tested a rocket last year, the South didn’t care. When Dennis Rodman and a group of random ex NBA-ers took their talents to North Beach (get it?) nobody cared.

It’s interesting that everyone says they don’t care, but every day on the news Rodman is there doing God-knows-what. Here in the South it’s almost like they don’t care because to care is to acknowledge the wackiness that is the North. When a child starts crying and throwing a tantrum for no reason just to get the parents attention, a parent will ignore the child until he or she learns that that is not how you get attention. South Koreans look at this Dennis Rodman ordeal like he’s one toy being thrown against the wall in an attention-craving tantrum by the North. The funny thing is, Dennis Rodman seems to be only one who doesn’t understand it. Actually, Kenny Anderson, Cliff Robinson, Vin Baker, Craig Hodges, Doug Christie, and Charles Smith seem to not really get “it” either. Here’s the evidence:

I understand, Dennis. You’re getting paid an unholy amount of money for this. Charles, c’mon, you know we know what’s up. Chris Cuomo knows what’s up but for some reason he thinks these guys will say something that will get them beheaded before they can make their way back to U.S. soil.

In truth, the answer to every question asked should have been “yea, well as you know most NBA players go bankrupt within a few years and the North Koreans have a ton of money to throw around for reasons we can’t comprehend. They want us here to be political puppets in a chest-pumping contest with the South, and we are actually extremely scared that we may never make it out. So shut up and let us get paid so we can get the hell out of here.”

So, with basketball as the guise, political rife with the South as the premise, and unfathomable amounts of money as the motivation, Dennis Rodman has become the only American who can talk with Jong-un in a casual manner. Dennis “You-May-Kiss-The-Bride-Oh-Wait-That’s-Me” Rodman is one of the most important political figures in the world, and when asked about his political intentions on CNN, he sounds like Macho Man Randy Savage defending the taste of Slim Jims.

So what does it all mean? If you ask Dennis, it means he has some sort of power to make positive change in the U.S.-North Korean political climate. If you ask South Koreans, it doesn’t mean a damn thing. It may also mean that they think Americans do a lot of drugs.  If you ask North Koreans, I assume it means that every show has its puppets. Some of those puppets just happen to have multiple NBA championship rings. If you ask me, it means that he can feel me, leaning out my window looking at the moon, hoping that Dennis is looking too so he can hear me say “I object!”

I still don’t get weddings.

Remember you can always get more at twitter.com/boomtho. More at boomthoshop.com!