Elton Brand: "I want to play and be a part of a championship team"

Elton Brand: "I want to play and be a part of a championship team"

Nice dunk and big win last Wednesday against the Pacers.

Elton Brand: Yeah. It was a big win and we ended a three-game losing streak without our leading scorer and rebounder, Al Horford.

You were having a very good season and then, like you said, Horford goes down. A big blow.

EB: It's tough. We won the first two games without Al, but you know he's a great all-around player for our team. We have to figure it out. We're still positive, and winning against Indiana shows that we're not just going to lay down.

You're still third in the East. Does the absence of Horford change your goals as a team for the season?

EB: Yeah, not having Al it makes it more difficult but we're still a good team, we're third in the Eastern Conference like you said. We still have a winning record, although the East is not playing so well this season [laughs]. We're still playing pretty good ball.

Back in late December Atlanta Journal-Constitution journalist Chris Vivlamore tweeted that you said to him: Can Jeff Teague get some All-Star votes now?

EB: Yeah, we had a week where we played Kyrie Irving, Stephen Curry shortly after that… and other tough point guards. And Teague played great. Also, Paul Millsap had a great run, he's playing great. We're not getting a lot of attention in the media but I would like to see those guys in the All-Star Game. Also Kyle Korver in the three-point contest if he wants that… and our rookie Pero Antic, I know he's a little old but I would like to see him in the rookie game [laughs]. I'm rooting for all of my guys.

Korver is still on fire: 106 consecutive games hitting at least a three-pointer… Has this streak been more a motivation for the team rather than a distraction?

EB: Yeah, yeah. We want to keep the streak alive as long as possible. We're working, making sure he's getting good shots. It's a team effort.

Can you name some of the best shooters you've played with?

EB: When I was in high school I saw Ray Allen working out in New York getting ready for the film 'He Got Game'. I saw his work ethic, how well and great he shot. When I played with the Clippers, we had Eric Piatkowski. He was very good. Kyle… and of course Dirk Nowitzki.

You've had a lot of NBA coaches during your career. What makes Mike Budenholzer different from the rest?

EB: He's a young coach. He was with the San Antonio Spurs organization for 20 years, but he's his own person. I've played with coach Gregg Popovich in USA games and he has his own identity.

You made it to the playoffs when you played with the Clippers, and also with the Sixers and Mavericks. Still, no luck and no ring.

EB: With the Sixers we had a good run. I left many friends there like Thaddeus Young, Spencer Hawes, Evan Turner… We were one game away from the Eastern Conference Finals. Paul Pierce closed it out in that seventh game. Then in Dallas we played 24 games without Nowitzki so that was a tough season. It was great playing for coach Rick Carlisle.

Why did you choose the Hawks?

EB: Dallas made a nice offer and I had a great time there but I felt it was such a luxury playing with guys like Al Horford, Paul Millsap… Gustavo [Ayon] was playing great with the Mexican national team, I did some research on Pero… They had shooter like Korver… I felt I could contribute, play some minutes and bring a locker room presence.

It's very early to even think about if you want to stay in Atlanta, but I'm pretty sure this won't be your last contract, right? 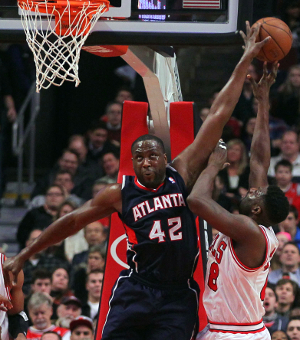 EB: You know, it's going to be a year-by-year thing. I feel good, I played 30 minutes the other day [laughs]. I definitely have aspirations. I want to play and I want to be part of a championship team, that's my goal and still is. But I want to be proud of it. I want to be out there, diving on the floor for loose balls, blocking shots, doing everything I can to help. I don't want just to sit there and clap. We'll see. My son is really into basketball, learning the game. I definitely enjoy being here in Atlanta, I see something special here.

Without Horford, you started as the starting center but recently you have switched to one of the primary weapons off the bench. How do you feel about it?

EB: I feel good, I like it. I started at center and I didn't play too bad. But now I'm with the second unit… whatever it takes to help the team get some wins.

This is going to be a big draft loaded with talent. As one of the best players in Duke history, what can you tell us about Jabari Parker?

EB: Parker, coming from Duke and working with Coach K, you definitely get prepared for playing in the NBA and contribute. I know he's a good prospect, he knows how to play team-oriented basketball.

You were the first overall pick with Chicago. What do you think about the recent trade of Luol Deng?

EB: Well, they are looking for the future, obviously, but that's what the organization has to do with all the injuries and the salary cap situation. I started my career there so I'll root for them unless they are playing against the Hawks. The future looks bright for them although it looks like a tough loss now after trading Deng.

You fought back to play in the NBA after tearing your left Achilles tendon. What do you think about Kobe Bryant and the tough times he's facing right now?

What do you think is your legacy with the Clippers?

EB: Well, I think Mr. [Donald] Sterling kind of wanted to turn the corner. We had a pretty good team, a coach like Mike Dunleavy, we won games, made the playoffs… So I feel I was part of a team that really helped the franchise to turn that corner.

You've had another thing going in Los Angeles – your involvement in the movie industry as an actor and producer of films like 'Rescue Dawn' with Christian Bale.

EB: Well, it's something I really like. I'm always pitching projects although now we're more into indie films, I want to enjoy that part of the business.

No TV shows like 'Breaking Bad' or 'Game of Thrones'?

EB: Not really. I've watched some of that stuff and I enjoyed it but that's a whole different animal. I don't have the connections there that I have in the movie world.

What are your favorite movies?